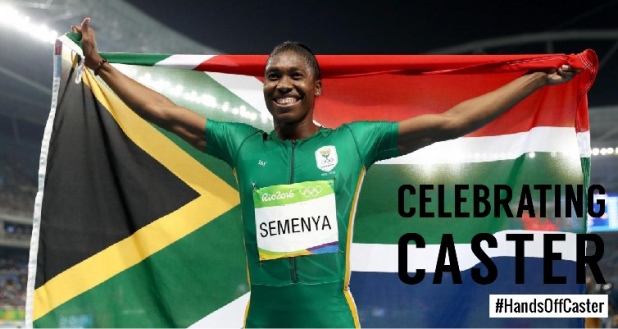 Caster Semenyaâ€™s attitude to continue serving black excellence despite the ridiculous amounts of bull sheâ€™s had to go through is the reason sheâ€™s our Woman Crush Everyday.

Born in 1991 in rural Ga-Masehlong, Polokwane to Dorcus and Jacob Semenya, Mokgadi Caster Semenya has always been a winner. She was raised by her grandmother in the Fairlien village. She began her running career with the Moletjie Athletics Club in Limpopo – according to the clubâ€™s secretary, Kaizer Mokaba, the club discovered her in her home village and developed her talent. The middle-distance runner and 2016 Olympic gold medalistâ€™s talent is often overshadowed by controversies over her gender, despite her holding the national 800m record.

Semenya played a lot of soccer growing up. â€œI loved soccer. I played soccer a lot in the menâ€™s division because we didnâ€™t have a womenâ€™s division that side,â€ Semenya told journalist Bareng-Batho Kortjaas in anÂ interviewÂ with the Sunday Times.

â€œSemenyaâ€™s athleticism was attributed to a single molecule â€“ testosterone â€“ as though it alone earned her the gold, undermining at once her skill, preparation and achievement,â€ wrote Katrina Karkazis in The Guardian.

Do elevated testosterone levels in a woman even enhance athletic performance? If so, by how much? Five metres? Two seconds? The difference between first and sixth place?

Semenya has been through a hell of a lot since she became champion at the women’s 800m world athletics championships in Berlin at 18: sheâ€™s been ridiculed, stripped, had her place in world athletics questioned and her gender very publicly and constantly scrutinised.

Rather than admiration, her victory resulted in a ban, invasive medical examinations and a swirl of derogatory media reports that she had both male and female sexual characteristics.

Questions were raised about her gender following her victory at the 2009 world championships. The International Association of Athletics Federations (IAAF) felt â€œobligated to investigateâ€ after Semenya made improvements to her performance, which they categorisedÂ as “the sort of dramatic breakthroughs that usually arouse suspicion of drug useâ€.

The test took weeks to complete and required a physical medical evaluation, including reports from a gynaecologist, endocrinologist, psychologist, an internal medicine specialist and an expert on gender. The IAAF added that the “gender verification test” was to prove she did not have an unfair biological advantage.

The sex test results were never published officially but some results were leaked to the media, resulting in bigoted claims about Semenya, such as having three times the amount of testosterone that a “normal” female would have. Although she identifies as a woman, sheâ€™s been shoeboxed as â€œintersexâ€ and â€œhyperandrogenicâ€; some have gone as far as saying sheâ€™s not 100% woman. We wonâ€™t reproduce some of the nastier tweets that weâ€™ve seen here.

Semenya was withdrawn from international competition until July 6 2010, a whole 11 months later, when the IAAF cleared her to return to competition.

â€œOver the last seven years, the narrative surrounding Semenya has taken on a life of its own. Sheâ€™s no longer viewed as a human being; sheâ€™s merely a concept to debate. While others get fawning Sports Illustrated covers when they dominate their sports, Semenya gets ridiculed and questioned, poked and prodded,â€ wrote sports reporter Lindsay Gibbs.

But all of this only made Semenya stronger: as Azad EssaÂ noted, â€œAnother human being might have hung up their boots, succumbing to the slander. But Caster only worked harder, facing the humiliation head-on. She stood up. She focused. She ran.â€

Caster, you remind us that we all have a place in this mad world

#LGBTILife: The reality of one woman’s journey for a name change in South Africa

#LGBTILife: The reality of one woman’s journey for a name change...