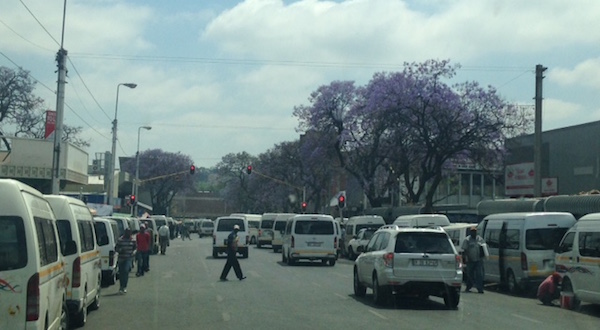 Commuters were left stranded last week after members of the United Taxi Associations Front (UTAF) abandoned their taxi routes and marched on the department of transport and community safety in Johannesburg to air their concerns about being left out in the cold by government’s plans for integrated transport in the province. Obed Mhlengi, 36, Diepkloof
I wanted to work that day but I understood that we have to present our grievances to the government. We are tired of being mistreated by government. They donâ€™t issue us permits and they stop us asking for them, then they ask for bribes from us. We have to use the bossesâ€™ money and when it doesnâ€™t tally, it is taken from our pay check. We are always stuck in traffic during peak times, yet the Rea Vaya lane is empty. That doesnâ€™t make sense at all. Mduduzi Nhlapo*, 29, Orlando East
I didnâ€™t participate in the strike. On Sunday evening I got a call from my boss, the taxi owner, saying that we are on strike tomorrow. For me the issues that we are on strike for benefit our bosses more so I am not really concerned. I just want to make money. The issue of permits is a real one though, the transport department doesnâ€™t want to issue out permits and then they stop us, asking for the very same permits. It is silly and annoying. Mr Ngwenya, 50-something, Meadowlands
UTAF confirmed the strike late so we didnâ€™t get a chance to tell commuters about the strike. We care about our commuters, especially the matric learners as they are writing final exams, but that was out of control. I participated in the strike for one reason, the permits. The local government does not want to issue us permits so that we can work; there is always a story about the permits. When you work without a permit, they fine you R2,500. We cannot work like this; government must treat us better. Lucky Ndaba, 27, Orange Farm
I am very upset with the government; they donâ€™t care about us at all. All they are concerned with is putting money in their own pockets. Rea Vaya has its own lane inside the CBD and we cannot use them even though we are also a transport industry. We are continually stuck in traffic while the Rea Vaya lanes are empty. If the taxi industry was government owned like Rea Vaya, we would have our own lanes and we would have permits. But they donâ€™t benefit from the taxi industry, so they donâ€™t care. Government is selfish and they make it hard for us to make a living. Mathenkosi Dlamini*, 35, Newlands
I feel betrayed by the government, that is why I participated in the strike. They donâ€™t want to give us permits so that we can do our jobs, and when we work without them, they impound our cars and leave commuters stranded. Imagine you have a job and your manager says that you have to wear the companyâ€™s uniform to work, but he doesnâ€™t provide it for you and then he fires you. Does that make sense? But that is what we are faced with. The government does nothing for us taxi drivers, as if we are not citizens of South Africa as well. All they care about is their Rea Vaya.

– Voxes have been edited for brevity and clarity. Some names have been changed to protect drivers’ identities.