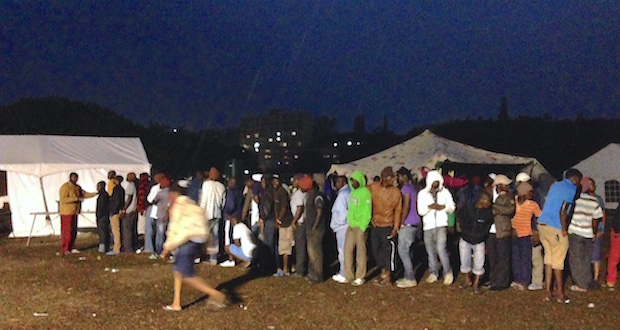 “It is not our responsibility to create jobs for South Africans especially those who say we are taking their jobs.”

AMURI DJUMA, from the Democratic Republic of Congo (DRC), has been living at the Isipingo camp outside Durban for the past three weeks. It is not safe for him to return to the community, but unlike some at the camp, Djuma cannot board a bus for the country of his birth. With the ongoing strife in the eastern part of the DRC and the xenophobic violence in the community he had called home for more than a decade, Djuma has nowhere to go. He told The Daily Vox his story.

I have been in South Africa for 11 years, mostly here in Isipingo. I left my country because of war taking place from time to time. I sought a place where I could live and do business in peace. That is why I came to South Africa.

But what is happening now leaves us no choice; we are in a dilemma because the local South Africans donâ€™t want us here.

This xenophobia is not something that happened today and it was here already and it will always be here. It can erupt at any time. When it happened in 2008, the South African government tried to stop it because of the World Cup. This is why they acted fast. This time they didnâ€™t act fast because they didnâ€™t have any reason to.

The government also believes that foreigners must be repatriated. They didnâ€™t know how to do this so instead they got their people to do this. So that is why the King, Goodwill Zwelithini, stood up and said those things that made us suffer and die.

It is not something that just came about. It was always the plan, they just didn’t know how to do it [and] so 2015 was just the the year for them to do it.

We live with these people but they always call us names and have things to say to us and this shows the discrimination between us and the people of SA.

Xenophobia in South Africa is like a volcano; it can erupt at any day and any time, we cannot tell when it will happen.

I am a refugee. I cannot go back to my country. The same reason that made me come here cannot now make me go back. So we have to look at what the UN can do for us because we came here for protection and we are looking for the same protection.

The conditions at the camp are not very good because the women and children have to sleep on the floor no matter what kind of weather it is. It is not easy and we are only here because we have no choice.

I wish to go back to the community but I have no assurances of my safety. If the government had protected us from the beginning, the mob that was attacking us could have been controlled. But the fact that they didn’t stop the attacks made the idea become workable. By putting us in the camp, it was telling other communities to keep on doing this. They want to integrate us but we are uprooted from our businesses and our homes; our shops looted. They have taken everything.

On stealing jobs
It is not our responsibility to create jobs for South Africans especially those who say we are taking their jobs. We came as refugees. The ministry of home affairs only gave us a paper that says we can work and study. So we found ourselves in a situation where we had to think of ideas to survive. So we made our business that they were not doing in SA before.

I came in 2004 and I started doing haircuts from a gazebo in the street and that is how I made my living. This is difficult for South Africans to believe, how something can survive from doing haircuts only. So that makes me wonder when they say we took what belongs to them. Most of us are surviving on these informal jobs without any support from the government. We earn by our own sweat and creativity. Many South Africans actually learn from us. They should be grateful because we are not taking or learning from them.

We are just creating. so when they say we are taking from them, they are totally wrong. Even if we leave, there still won’t be jobs in SA. They will still be asking for jobs. We are not taking from them. So the South Africa government must create jobs.

They believe that if they chase us away they will earn more opportunities but they will not do what I am doing. They wonâ€™t stand and cut hair for two years in the street. They are lazy. Not all of them, but some of them expect to receive something out of nothing.

This is political because for the 11 years I have been here, there has always been that idea that we are taking their jobs and some even claim we are taking their women. I donâ€™t understand where this idea is coming from, but I do believe they must be getting it from someone.

I think we call it xenophobia because when we were being attacked, we were being attacked in front of the police. The police saw the situation and didnâ€™t do anything, didnâ€™t make any arrests. When there are criminals there must be an arrest, there must a suspect. When this happened there were no arrests. when they were looting our shops, there was nobody being arrested, no criminal to say must be arrested.

On justice
I have a furniture shop in Isipingo and four guys looted my shop. They were arrested, some in the shop and others were seen carrying the sofa. I thought theyâ€™ll go to court but they didnâ€™t even go to court because they said there was insufficient evidence for them to be arrested and the next day they were released. So now we call it xenophobia because if it was a crime element there should be people arrested, but nobody was arrested.

At the end of the day we are not safe and we don’t know who to believe. We donâ€™t believe the government and what they are saying.

– As told to Al Jazeera English.

UN refugee agency (UNHCR) spokesperson Tina Ghelli told the Daily Vox that more than 400 refugees have been displaced in the recent xenophobic attacks. The agency is working with the KwaZulu-Natal provincial government and local authorities to find out what kind of support is needed and to help refugees reintegrate into their communities, be voluntarily repatriated or resettle in another country.

â€œA lot of them want resettlement and maybe eventually that will still happen, but resettlement is a long process,â€ Ghelli said. â€œEven if someone is resettled, it takes two to three years before someone leaves the country.â€

The receiving country then sends a team to interview people. If the refugees are accepted, there is another lengthy process of background checks, health screenings, and orientation before the refugee can leave for resettlement.

â€œThe primary response has to be governmentâ€™s,â€ Ghelli said. â€œWeâ€™re trying to find out more about the reintegration process, because the first priority is making sure that people can be safe here â€“ it shouldnâ€™t be to send them away.â€