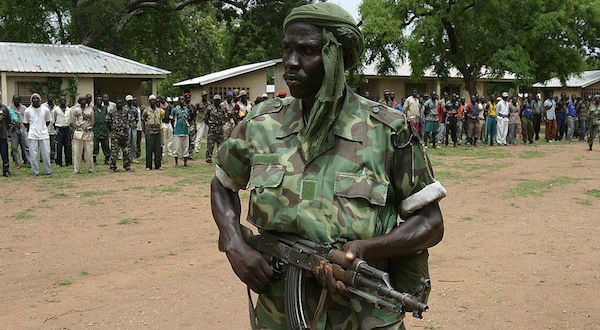 A year ago, South Africa couldnâ€™t turn its eyes away from the Central African Republic (CAR). Fourteen of our soldiers had been killed as Seleka rebels ignited a coup. Back home, outrage erupted. What was the South African Defence Force doing in CAR?Â  Headlines ran amok, theories around shady business dealings and diamonds were touted, and eventually governmentÂ withdrew its troopsÂ from CAR. The withdrawal of the soldiers became the withdrawal of South African interest in CAR. Meanwhile, people in most parts of the country were left in turmoil. Â

RA’EESA PATHER spoke withÂ Al JazeeraÂ correspondent, Nazanine Moshiri, who is in Bangui, about the situation in CAR today.Â Â

Civilians in the Central African Republic have been the victims of on-going violence and human rights violations in the wake of brutal sectarian warfare. In March 2013, former CAR president Francois Bozize was ousted from power and forced to flee after Seleka, a mostly Muslim rebel force, took over large parts of the country.

The mostly Christian anti-Baleka formed in response to Seleka, and reprisal attacks followed. Civilians trapped in the middle suffered the brunt of the attacks, with children being beheaded or recruited into rebel ranks. Reports indicate that violence in Bangui has somewhat settled, but internal tensions still exist in the city.

â€œWhen you go to the Muslim neighbourhoods, things are very quiet, and thereâ€™s a lot of tension there,â€ Moshiri toldÂ The Daily Vox.â€œThereâ€™s hate in many communities towards each other, and it never used to be like this. People were always united, one community, one country.â€

The African Union deployed troops to CAR to quell the violence. ButÂ with speculationÂ that neighbouring African countries, like Chad, had capitalised on the conflict, this group, known as Misca (after the French acronym for theÂ International Support Mission to the Central African Republic)Â has been at the centre of troubling allegations.

â€œMisca have been accused, in some parts of the country, of committing human rights abuses themselves, so people mistrust them.â€ Weapons have always flowed into CAR, but recently theyâ€™ve become a lot cheaper. A Chinese improvised hand grenade in now the same price as a Cocoa-Cola, Moshiri said, and most of these arms are in the hands of people perpetuating violence.

â€œOrdinary people donâ€™t have arms, they just want to go about their normal lives. Itâ€™s the rebel groups that have arms, [and they] are controlling these minds that are causing chaos in this country,â€ Moshiri says.

Since the conflict began,Â hundreds of thousands of Central Africans have beenÂ internally displaced,Â and Moshiri says around 40% of the population is struggling to find clean water. CAR is perhaps one the wealthiest countries in Africa, but its people, in some parts, are in financial and humanitarian crisis.

â€œThe Central African Republic is very wealthy, it has a lot of mineral resources: diamonds and gold mines galore everywhere,â€ Moshiri says. â€œBut the wealth is in the hands of a very few.â€ The new United Nations mission to the Central African Republic, called Minusca, arrived in the country last week. Their arrival marked the end of the African Unionâ€™s time in CAR and the beginning of a newÂ blue beret effort. It has taken time for the UN mission to be deployed, but access to funding remains a concern for international humanitarian missions.

“With the worldâ€™s attention being on all these other conflicts in the world from Syria to Somalia, itâ€™s been very difficult to get anyone interested in whatâ€™s happening here in Central African Republic,â€ Moshiri says. â€œNot just the media, but international donors as well.”

Ebola has sparked aÂ knee-jerk reactionÂ around the world, with America, the World Bank, France and the UN deploying financial, medical, and infrastructural aid to the worst-affected regions of the West African outbreak. CAR itself has invested financial resources into securing its airports from Ebola.

â€œOf course a lot of funding is being diverted to [Ebola], funding which probably wouldâ€™ve been heading here into other parts of Africa and different UN type missions,â€ Moshiri says.

Although violence has simmered in some parts of CAR, in northern territories the conflict has escalated. Human Rights Watch last week reported that at least 146 people had been killed since June. The totalÂ death tollÂ is unknown, with many remote villages around the region being unaccounted for.Â Moshiri maintains, however, that while sectarian violence remains a deep concern in CAR, the origin of the conflict is not being addressed.

â€œThe root causes of conflict are not sectarian, they are poverty and corruption in this country,â€ Moshiri says.

As the UN takes leadership in CAR, it has a daunting task ahead. Central African Republic is caught in the stronghold of violence, poverty and ethnic killings. But the world has forgotten.