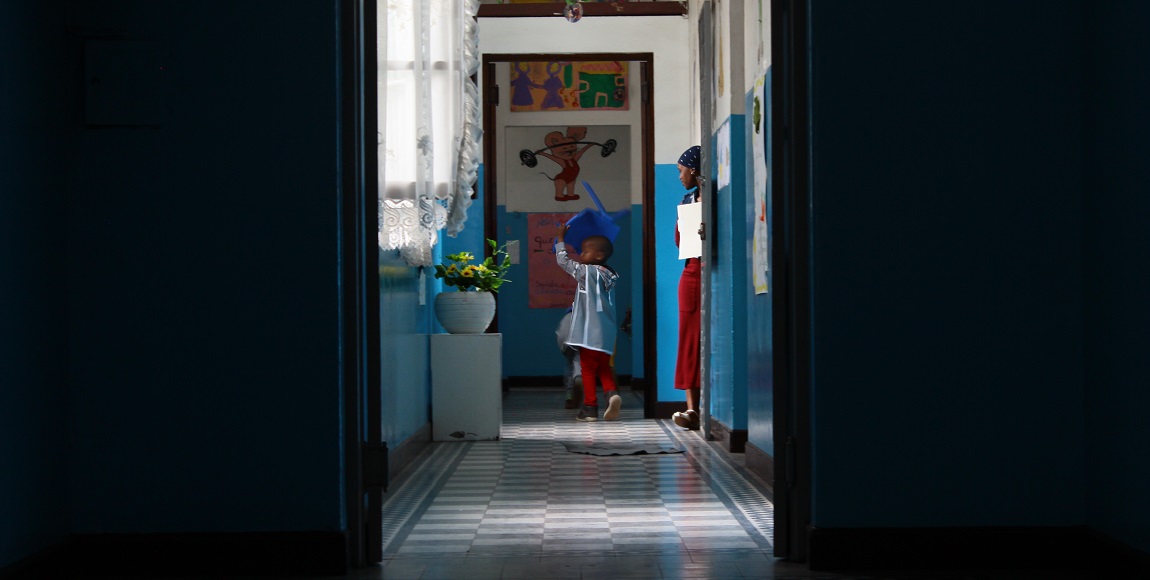 Centro Infantil Nhelety is a pre-primary school in the Alto-MaÃ© B district of the capital Maputo. The school has a fantastic reputation and the waiting lists for entry are extensive. The preschool is housed in what had been a clinic in 1939, during Portuguese colonial rule. The school began accepting children from two months to five years of age in 1975 and has since become a model school in Maputo. â€œEven other staff in the provinces of Mozambique come to visit the school to learn about how it works,â€ said the schoolâ€™s director Alzira SebastiÃ£o. SebastiÃ£o says there’s nothing really special about the school, other than the commitment of the staff to the children and to managing the school well. “When [the parents] see that their children are happy, that theyâ€™re well looked after, they also spread the word amongst their friends. Itâ€™s really how theyâ€™re looking after the children,â€ she said. The youngest children at the centre are just a few weeks old. In the left wing of the building is a nursery where children from two months old to two years old spend theirs days in play. The rest of the building is filled with the laughter of toddlers singing educational songs to the beat of a drum. Those closer to school-going age learn in a traditional classroom setting.

The Mozambican government provides the school with a curriculum manual from which they create their own learning and reading materials. Centro Infantil Nhelety is one of the four schools which fall under the department of gender in the Ministry of Gender, Children, and Social Welfare. SebastiÃ£o said the department was created in response to the increasing demand for formal quality pre-primary education.

The centre’s 2016 budget allocation was MT 7 882 373 (about R 1.7 million). This may sound like a lot, but the centre has to stretch the budget to cover daily running costs, materials and infrastructure. SebastiÃ£o said that because of the building’s age, a lot of repairs are needed, especially on the roof. â€œA new school would be better,â€ she said. There are 29 teachers at the centre – two per class.Â They are university-trained and all of them are female. â€œMen arenâ€™t interested in this type of education,â€ said SebastiÃ£o. And then there’s the support staff, who keep the facilities in order and run the kitchen. Time outdoors is very important atÂ Centro Infantil Nhelety. In the large courtyard, the children do physical exercises to the beat of a drum while some played with big building blocks. SebastiÃ£o said the school is struggling to keep up with the growing demand for early childhood development and theyâ€™ve had to increase the number of children they take into each class. But, she said, itâ€™s better that no child is left behind. â€œChildren who are staying at home are very shy. The children who are at school from a very young age already know how to talk, how to communicate, and they know how to interact with other children,â€ she said.

Research has shown that nurturing and caring for children in their early years has lifelong benefits to their health, wellbeing and productivity.