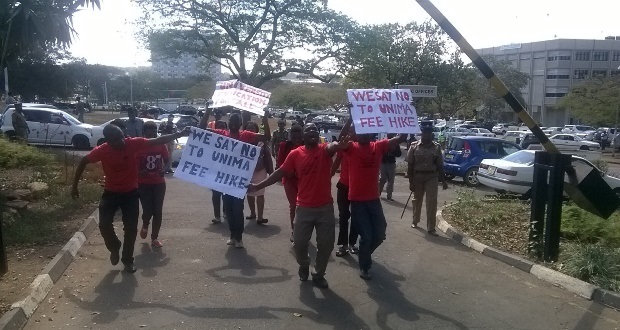 Learning in the University of Malawi is at a standstill as running battles between students and the police continue. Angry students are on the rampage, destroying public property and burning tyres in main roads to block traffic. This is an ongoing protest against fees hike of about 300% amidst an ailing economy. BRIAN ITAI and SUZGO CHITETE round up.

The government of Malawi, through the university council announced that the financial contribution by generic students will go up in the 2016/17 school year from K275, 000 to K400, 000 per year at Chancellor College, the main campus of the university of Malawi. At the Polytechnic, another constituent college of the university fees has jumped from K380, 000 to K450, 000. While students at the Kamuzu College of Nursing will now have to pay K450, 000 from K340, 000 and mature entry students will have to pay K950, 000 per year, from K275, 000.

Students from the higher learning institutions feel the hike is unreasonable and unrealistic, considering the prevailing economic condition in the country where about 6 million people out of a population 15 million are in dire need of humanitarian assistance. The students also capitalised on the decision of the government not to raise salaries for the civil servants in the 2016/17 financial year, citing financial challenges facing the country.

â€œIf government does not have money to pay civil servants, where will our parents get the money to pay for our school fees?â€ said the president of the University of Malawi Student Union in a press statement.

The governmentâ€™s reasoning on the matter is that globally, mature entry students pay economic fees and not subsidised fees. Similarly, generic students in the University of Malawi do not pay economic fees but a heavily subsidised contribution, contrary to what is happening in private universities in the country.

â€œThe need to have a well-running university calls for an increase in school fees as this is the only legitimate way to supplement the inadequate funding to the university through government subvention,â€ says the University Council in a statement.

Government also argues that while the proposed amount is beyond the reach of many Malawians who, according to statistics, live below a dollar daily, the poor students will not withdraw from school as there is a loan in place for such needy students.

According to an education activist who heads the Civil Society Education Coalition in Malawi, Benedicto Kondowe, while the hike was expected and long overdue, the threshold of the increment is beyond the reach of a majority of Malawians.

â€œThe increment makes education as an exclusive right for the rich and this takes the poor to the margins of misery. Government is aware of the negative consequences of their decision,â€ said Kondowe.

He added, â€œDespite the government claim that there are adequate provisions for loans for the poor, the university office continues to issue support letters to poor students to seek help from companies and good Samaritans. Why not just have in place a loan board to provide loans to these needy students?â€ asks Kondowe.

One of the countryâ€™s social and economic commentators, Henry Kachaje, said there is need to critically evaluate the cost structure of the public universities to take away any elements of unnecessary administrative expenses.

â€œFor example in the current budget, the university office, a purely administrative overhead was to the running of the constituent colleges was allocated MK1 billion while KCN (Kamuzu College of Nursing) received MK2.9 billion. It does not make sense that an administrative office will spend a third of what it will take to train nurses in various colleges for a whole year,â€ said Kachaje.

Kachaje believes that the need to raise the fees is justified, considering the cost of living and running institutions has gone up, but suggested a gradual increase would have done the trick, not in one stride, which he feels is very punitive.

â€œIt would be naÃ¯ve to expect our public universities to maintain quality and high standards without demanding an increase in funding. One such way is to raise contributions from learners, but at the same time it must be appreciated that parents and guardians who need to shoulder the increases are also undergoing tremendous financial pressures,â€ he said. Property within university campuses has been destroyed, traffic blocked every day and some students arrested for the mischief and the fee hike topic continues to attract public disapproval. Instead, the University of Malawi has closed Chancellor College, the main campus of the university where the protests began, as an apparent scare tactic for the rest of the constituent colleges. But the scare has only escalated the situation at all the four constituent colleges, which includes the usually reserved college of medicine.

But government seems to be unfazed with the reaction. Public relations officer for the university, Peter Mitunda, says plans are underway to have the Chancellor College reopened soon.

â€œWe are currently assessing the amount of damage caused to property around here, these institutions are never meant to be closed unnecessarily for long, and very soon we will be announcing dates when students should report on the campus. Our stand on the fees hike remains the same,â€ said Mitunda.

When contacted, spokesperson for the Ministry of Education, Manfred Ndovi refused to comment, pushing the matter to the University of Malawi.