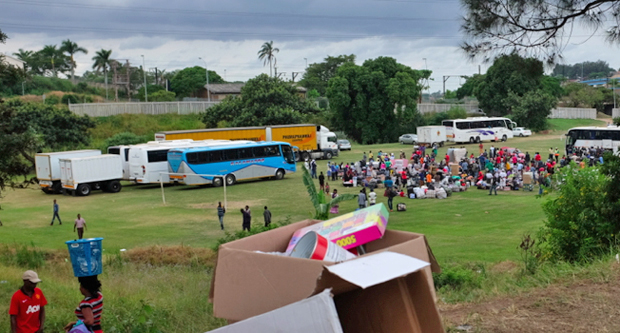 The Chatsworth camp for victims of the xenophobic attacks in Durban currently houses more than 3,000 displaced people. SAFIYYAH PATEL volunteered there last weekend.

At last count, there were more than 3,000 immigrants and refugees from a host of African countries including the Democratic Republic of the Congo, Malawi, Burundi, Nigeria, Somalia and Zimbabwe at the Chatsworth Displacement Camp. Many of them are too scared to leave and areÂ hoping the violence ends soon so that they can return to their homes and jobs.

People in the camp said they had been caughtÂ largely unaware when the attacks started. Many fled to camps, carrying as many as their possessions as they could. Some people we spoke to at the camp were hoping to return home in the next few days while others, not confident that South Africa was safe for them any longer, wereÂ waiting to be seated on a bus to return to their home countries. In addition to the eight tents that have been put up on the Chatsworth sports field, there are smaller tents onÂ the fringes of the camp. The camp is cordoned off with crowd-control fencesÂ andÂ is closelyÂ monitored by armed guards and members of the SAPS. Access to the camp isÂ controlled and only authorised entry is allowed. Many of the people at the camp are self-employed and so each day in the camp means they areÂ losing income. â€œLast week I was able to support myself; now I am living off donations,â€ one man said. â€œSome locals areÂ getting angry at the government because aid is being sent to us and they feel like they should be receivingÂ it.â€ Volunteers from the Institute for Learning & Motivation â€“ South Africa (ILM-SA) assemble a gazebo as a prayer space, following Â a request from a group of Muslims livingÂ in the displacement camp. At the last count, more than 20% Â of the people staying at the Chatsworth displacement camp wereÂ children.

Volunteers were allowed into the camp to spend some time doing arts and crafts withÂ children, many of whom have not been to school since they were driven from their homes. Doctors Without Borders (MSF) has started working with people in the camp. Many cases of diarrhoea andÂ fever are being reported from children. Some men inÂ the camp presented withÂ protest related injuries and a handful of TB cases were also reported. People have said they are scared to go to hospitals for fear of being targeted orÂ attacked. Almost all of the children in the camp as well as a large number of the adults have not returned toÂ school or work since the violence broke out. PeopleÂ sit idly in circles or resting against their possessions, waiting it out. Immigrants and refugees who are applying for repatriation documents to their respective countries, waitÂ in line to get their fingerprints taken. The department ofÂ home affairs has set up a makeshiftÂ tent just outside the displacement camp to facilitate the process. Immigrants and refugees wait in lines, with their belongings and families kept near, to board one of the several buses that have been organised to take them back to their home countries. The buses in thisÂ picture are headed to Zimbabwe. I hope that when this little girl remembers the events of the last week, it is theÂ capacity of human greatness she remembers over the ugliness. That the faces of those who came bearingÂ food, clothes and pasta necklaces to pass the time, blur the angry faces of those that drove her and herÂ family out of their home. That her last memories of South Africa are not of cold nights in overcrowded tents,Â but of warm people in dire situations. I hope that through the moments of darkness, it is the moments ofÂ light that stay with her.

Safiyyah Patel is a freelance graphic designer based in Durban. She is also a volunteer with the Institute for Learning & Motivation â€“ South Africa. Follow her on Twitter.