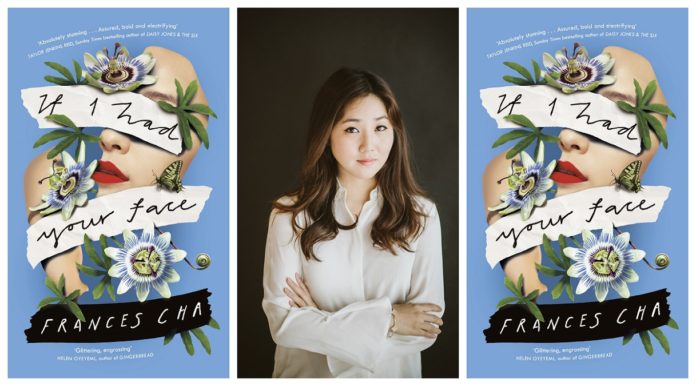 “I would live your life so much better than you if I had your face…” muses a character in Frances Cha’s debut novel If I Had Your Face. Focusing on four women, her novel is an in-depth and vivid look at women trying to survive in Korean society.

It’s 9:00 in the morning in New York but Cha’s passion for her work is plain to see, even over video conference. The book focuses on four narrators: Wonna, Ara, Kyuri and Miho. For women with four very different backgrounds. What ties them together is being bound by societal standards. The women have to survive in a world telling them how a woman should act, wear and how they should live.

For Cha, she’s always wanted to write a book about Korean characters in English. Growing up, she said she read English books about white people and Korean books about Korean people. However, after reading the Joy Luck Club by Amy Tan, she realised it was possible to write an English book about Korean people. After moving to Korea to look after her father and later for work, she had all types of life experiences. Those experiences – good, bad and unique – inspired the book.

During her time in Korea, Cha said she lived across the street from an office-tel. This is a Korea-specific type of building. It is a multi-purpose building with residential and commercial units. “So all day long, I would see people coming in and out. They’re kind of unfettered and you can tell that they live alone. They have their own set of concerns versus most people in Seoul who live with their parents before they are married (regardless of their age),” she said. All of the main characters live in the office-tel which forms the base of the story.

From the K-pop industry to plastic surgery, to Korean kids who study abroad, to room salons, Cha discusses it all in her book. And somehow she makes it work. She explains the nuances of Korean society so well. Even if you finish the book without understanding it all, you will definitely be left curious for more.

And that’s one thing Cha hopes her readers take from the book. “Korea is a very unique place and I hope they want to find out more about the country,” said Cha.

One thing she said surprised her about the response to the book was the focus on plastic surgery. Korea has one of the highest rates of cosmetic surgeries in the world and nearly one million procedures a year. In Western societies, plastic surgery is sometimes seen as anti-feminist and shallow. However, Cha explains it is easily accessible and there is a lot less judgement around it in Korea. With the small focus on plastic surgery, Cha wanted to show how differently beauty is perceived in Korea.

Korean entertainment from bands like BTS to movies like Parasite have taken the world by storm through the Hallyu movement. But Cha says she is a little sceptical about it as she had found many people in America have never heard about BTS or Parasite. “It’s a constant reality check. Those who are in-the-know know so well, and then there are those who never heard of it,” she said.

For Ara who lost her speech during a childhood accident, she is a passionate K-pop fan. Cha herself is a huge fan of the group BigBang (her favourite member is G-Dragon). She says her experiences in the fandom influenced her writing of Ara’s character. Cha says being in a fandom is very personal. For Ara, this is doubly so as she has a disability which makes her fandom all the more intense.

Read more: All The Times K-pop Put Us Through The Most In 2019

Ara is a huge fan of a K-pop idol, Wonna is married and Miho has a boyfriend. Another central theme from the book though is the absence of romantic love or men. There are male characters who appear throughout the book but they aren’t given any central importance. The book is mainly about the women and what they do to survive in the world. Cha said she hopes the book is received as a feminist novel as she thinks the friendship is very important.

“This is a book about early twenties women. When I think of all the guys that were in our lives, when we were in our early twenties – my friends and I – none of the guys are in our lives. At that age specifically, the friendships are really the bedrock of female experiences. I do think that women who are not lifted up by their wealth and status really rely on other women’s friendships to fall back on and gain comfort from their lives as they struggle forward,” she said.

A fifth woman, Sujin also lives in the office-tel and is roommates with Ara. However, she doesn’t feature as a narrator in the book. Cha says she initially thought Sujin was a simple character and she couldn’t add anything more to her. However, while writing she realised Sujin has a lot of depth and actually assists her friends quite a lot.

Sujin’s actions form part of an interesting theme in the book. Many of the characters live their lives believing that things turned out a certain way because of some action. However, it’s revealed that someone was actually responsible for the way certain events happened. Cha said: “I think when we get caught up in our own lives and we think everything we do is the beginning of the end of everything. You don’t realize that along the way so many people have helped us. So many people have shaped us and influenced us for the good and the bad with opportunities and subtle influences.”

The book was released in April this year in America. This was also a time where there was a lot of anti-Asian sentiments and racism related to the coronavirus. Cha said she wants to create empathy with her book.

“I think the only effective tool against racism is empathy. Racists are racist because they cannot identify with the person that they’re attacking. All we can do as writers is try to create empathy by inviting the reader to look through someone else’s eyes and see what they’re going through and the struggles that they have,” she said.

The book is currently in development with AppleTV. While Cha says she is sceptical as many Asian projects are picked up but never reach completion, she does have a dream casting in mind. She is currently working on a horror story based on Korean folklore and a children’s picture book.

“It’s very hard because there are so few representations of Asians. I would love to see a picture book set in Johannesburg in the English bookstores around the world, but I have not seen a single one. It’s kind of like that – trying to struggle against the tide,” Cha said.

This title is on the Exclusive Books Recommended List for October. It’s available in-store or online.