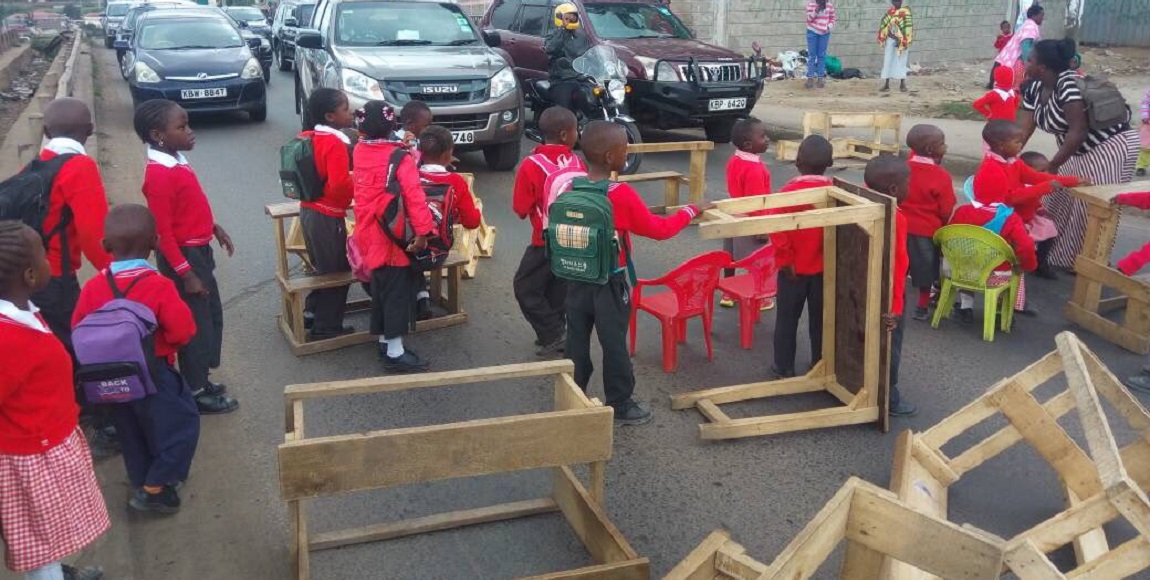 Land disputes and a lack of schooling infrastructure have led primary school pupils in Kenya to disrupt Nairobiâ€™s traffic. Weâ€™ve come a long way in furthering the rights of the child but kids today are still marginalised in many instances, which is why on Monday children from the Kenyatta Golf Course Academy blocked main roads with their desks to protests the demolition of their school.

The pupils, along with their parents, blocked Mbagathi road on Monday after the school was razed during the weekend. According to one of the parents, they were not given any notice about the schoolâ€™s demolition.

â€œI like my class and I like studying. They have now removed our class and there is no way we can study,â€ said one of the pupils.

According to reports, the Kenyatta Golf Course Academy was taken down because of a land dispute. Pictures from the incident are heartbreaking – the little protesters were barely taller than their desks.

Kenyatta Academy is a private school but we are following up on the details of Land grabbing @Maskani254 @GrayMarwa @bonifacemwangi https://t.co/Ngwd0FPA43

You can read more about the protest here.

Several Kenyan schools have been demolished recently following land disputes, some of which have been linked to corrupt officials giving multiple title deeds for the same piece of land.

In 2015, Kenyan riot police teargassed children from the Langata school in Kibera, Nairobi, who were protesting the sale of their playground to land developers. Images from the incidentÂ were seen round the world.

Itâ€™s hard to imagine young children being caught at the heart of a protest over basic rights, like education, and even harder to see them beaten and teargassed, as happened in Kibera.

But itâ€™s actually not unusual. Historically, school children have been involved in protests going back decades – consider the Soweto youth uprising of 1976. Hector Pieterson was just 12 when he was gunned down by apartheid police.

South African school children and their parents are still protesting over their schooling today. In February, pupils from Mdeni Senior Secondary School in Alice, Eastern Cape, blocked the R53 to get access to the new classrooms at the school.

Pupils of Philippi High School were shot at with rubber bullets by police when they were protesting for better learning conditions in March.

And thatâ€™s not even considering cases where communities use schools as focal points for service delivery protests unrelated to education.

Seeing children at the centre of conflict is never easy, but we canâ€™t help but be proud when our youngest citizens stand up for their rights.