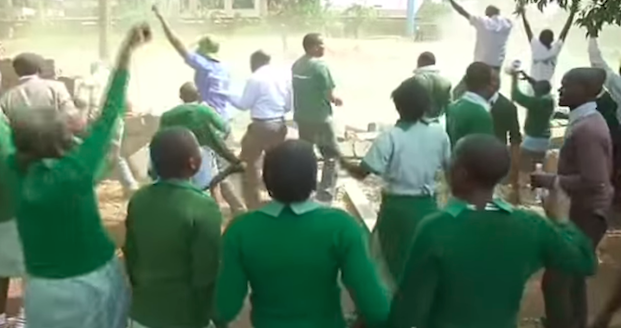 Images of Kenyan police brutally breaking up aÂ demonstration byÂ young children waving twigs, reminiscent of the Soweto massacre of 1976 in Apartheid South Africa, were beamed on TV stations for the world to see. The childrenâ€™s crime? Protesting against a land-grab made on their playground at Langata Primary School, in Kibera, a poverty-stricken part of Nairobi.

My guy @UKenyatta, when your government is compared to apartheid times, you are doing things wrong. #OccupyPlayGround pic.twitter.com/MdsyTUzSJn

The disputed piece of land â€“ the schoolâ€™s playground and playing fields â€“ is of prime value; it sits adjacent to the Weston Hotel and opposite Wilson Airport, and was walled off illegally during the school holidays.

A protest, publicised on social media as #OccupyPlayGround, was arranged and a handful of organisers together with the school kids managed to push down the wall, with the intention of â€œoccupyingâ€ the playground and playing on it.

Today is #OccupyPlayGround,9am,at Langata Primary School. The police are already there to protect us from the grabber pic.twitter.com/YrSbaoONXp

Instead, police threw teargas canisters at the students and demonstrators who had joined them to protest the alleged theft of their playground.

Some pupils were injured in a stampede after the police cornered them between the road and the wall and it was only after horrific scenes of children weeping and being carried away from the teargas hit the media that the Kenyan government acted on the issue.

The issue of the land-grab was first brought to light by an article carried by The Star newspaper but no one seemed to react to it until activists joined hands with the students to reposes the grabbed playground.

In an ideal situation, in case of a grab on public land, those in authority are expected to swing into action to investigate the issue, recover the land and prosecute the thieves.

However, in Kenya this is not the norm â€“ particularly when the land in question is grabbed by powerful, well-connected politicians and when the victims are ordinary Kenyans. At first no one seemed to know who the shadowy land-grabber was, or dared to publicly name him (or her), and the grabber remained faceless despite tough talk from the government.

A day after the ugly incident President Uhuru Kenyatta gave a tongue lashing to his lands cabinet secretary Charity Ngilu and National Lands Commission boss Mohammed Swazuri over the issue. Kenyatta also called for the head teacher of the school to answer questions on the matter.

It was only on Thursday that Ngilu named the people who had allegedly made the land grab â€“ four directors of a company known as Airport View Housing Limited, Madip Singh, Madit Singh, Haban Singh and Amrit Singh.

But the opposition ODM party has accused the government of covering up for the â€œreal known grabbersâ€Â  â€“ the â€œnames behind the namesâ€ â€“ and Kenyatta himself of overseeing â€œmassive land-grabbingâ€.

Land-grabbing is an ongoing issue in Nairobi and one which has not been adequately dealt with.

All of this gives the impression that you can rob the Kenyan public and not be held accountable â€“ as long as you are powerful.

Jillo Kadida is the chief court reporter for The Star newspaper in Kenya.