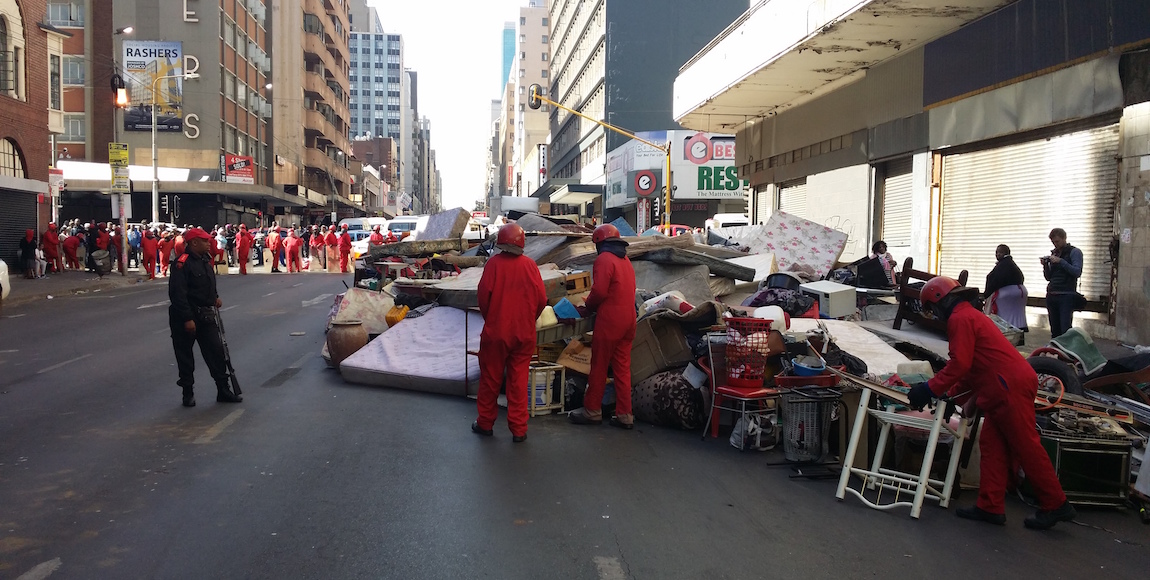 On Wednesday night the residents of Fattis Mansions slept on Jeppe Street after being evicted that morning. This followed a court order of 25 April where they were ordered to vacate within 45 days as the building was deemed â€œdestroyedâ€ due to its ruined and hazardous state.

Fattis Mansion residents question the legality of their forced eviction

On Wednesday evening, the Socio-Economic Rights Institute of South Africa (Seri) filed an urgent court application to have the evicted residentsâ€™ peaceful occupation restored, while they attempted to try get the April court order rescinded.

â€œOur application was for the occupation to be restored, because they slept outside yesterday. Alternatively for the municipality to provide alternative accommodation,â€ said Khululiwe Bhengu, a candidate attorney from Seri representing the Fattis Mansion residents.

The matter was heard at 7pm last night, and the judge ordered that the city provide alternative accommodation for the night, pending his judgment which would be delivered at 10am on Thursday.

According to Bhengu, the City of Johannesburg said it could provide tents and toilets on a vacant piece of land in Johannesburg. Bhengu said that after Seri representatives left court they went to assess the area, but it appeared that the city had not arranged for anything.

â€œThis morning again we went to see the clients and theyâ€™d slept on the street, the city did not provide what it was supposed to,â€ she said.

On Thursday, the judge dismissed Seriâ€™s application to have the tenants restored in the building. The reason for the decision was that the building was in too bad a condition for habitation as it has no lights, water or toilet facilities. Bhengu also told The Daily Vox at least one child had died in the building as a result of its condition – which IOL described as a â€œputrid ruinâ€. The child fell down a rusty staircase into the courtyard below back in 2015.

A representative from the mayorâ€™s office told the Daily Vox that the City was facing a housing backlog of 300 000 units â€œowing to the neglect of previous administrationsâ€ but would commit to doing what it could, within available resources, to respond to the needs of evicted residents.

To accommodate the evicted residents temporarily, the City says it is providing tents at Wembley stadium in Turffontein where services such as water and sanitation are available.

â€œWe continue to plead with property owners who seek the eviction of illegal occupiers, to first engage with the City in order to prevent the indignity of rendering those affected homeless,â€ said Siyanda Makhubo on behalf of the mayor.