Home Fascination For Colored Girls explores what it means to be a black woman...
WhatsApp
Facebook
Twitter
Email
Print 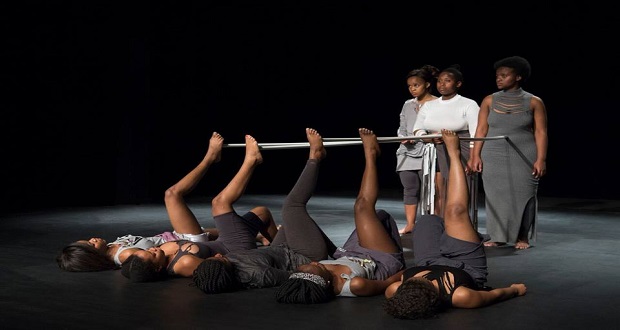 Ntozake Shange’s music-drama, For Colored Girls Who Have Considered Suicide When the Rainbow is Enuf, is a work of poetry, music and improvisational dance otherwise known as a choreopoem. The written text tells a story of pain, suffering, strength and resilience with a cathartic joy in each of the characters when they share their stories with one another. Directors Namatshego Khutsoane, Khutjo Green and Kieron Jina explore what it means to be a black woman in a sexist Johannesburg South Africa.

The play explores the themes of male domination, powerlessness, race and rape on the body and the psyche from girlhood to womanhood. This is not your typical play with a single narrative that begins and climaxes before a neat ending. Khutsoane and Green use Shange’s poetry to tell a story through collective and individual voices. A narrative of pain and redemption is carried through poetry, dialogues, singing and physical movement.

On the 25th August, when I walked into the Con Cowan Theatre at the University of Johannesburg, there were more than seven women on stage and they weren’t wearing the colours of the rainbow as is usually expected. The production is usually staged with seven women dressed in the colours of the rainbow and one dressed in brown to represent the connection to mother earth. Instead, the ten actors are dressed in tattered black and grey costume. Although each character remains unique aesthetically, they look like a discarded group of women collectively. “I couldn’t stand being sorry and black at the same time, it’s so redundant in the modern world,” says the first woman on stage. The women perform from a place of old wounds that have come up to be healed again. Each woman presents a poem while others dance in collective support. The minimal white props change function and meaning throughout the performance. The women use their bodies in collaboration with the transforming set to complement and contradict the performance. The contradictions represent how vulnerable and powerless women are in a given situation. If you are able to catch the show before the run ends on the 2nd of September, expect to hear traces of the new street and social media language, old and new South African music and tenements of Joburg culture.

“This is for you, I want you to love me, let me love you. I don’t want to dance with ghosts, snuggle lovers I made up in my drunkenness. Let me love you just like I am, a colored girl. I’m finally being real. No longer symmetrical & impervious to pain,” says another nameless woman. At one moment the women are gathered together in a chorus, moving as one, speaking as one. And beautiful music plays in the background setting the location and placing firmly on African soil. In a country supposedly run by black people and dominated by men, the story fixates only on the negative experiences black women have suffered at the hands of black men.

“It turns out that the nature of rape has changed, we get raped in our own houses by invitation.”

Under Khutsoane and Green’s capable direction we are invited to empathise with the women, to reflect on our own experiences, to draw the parallels and we are drawn into an intimate understanding of their suffering. “A rapist doesn’t have to be a stranger to be legitimate,” says one character. Once in a while I found myself silently mouthing Shange’s poetry; I could only recall my own experiences and my eyes began to water in those moments. “Somebody almost got away with all of my stuff […] what can anybody do with something of no value in an open market? Stealing my stuff doesn’t make it yours. It makes it stolen”.

Although it is a play with a cast of ten women, this story is for every woman and for everyone. After the show, I spoke to the members of the cast and audience.

Nkazimulo Mkhwanazi, 24, cast member and BA education student
“I had to go back to that 8-year-old girl who was probably raped. I had to go that 16-year-old girl who had an abortion. There is a sisterhood that developed from the process. We were able to carry each other because you cannot experience all these emotions and not need carrying. We created an environment where we felt safe around each other. I could come into rehearsals and take 10 minutes off because I just want to cry. And the cast would be very supportive, like I was in therapy almost everyday. Our directors challenged us to look beneath ourselves. Circumstances make you shy away from doing that. I understand that it is okay to deal with myself.”

Nonjabulo Kandawire, 22, cast member and communications Honours student
“They told us that we were going to open ourselves up to things that have been buried deep inside of ourselves. I was made to reconcile with things that I thought I had dealt with. It really was a healing process because I have learnt things and forgiven things about myself. It is important that people see themselves in what we are doing. Life isn’t black and white, and a black woman’s life is very complicated and intersectional, there are so many layers to our stories.”

Vukosi Maluleka, 31, audience member, construction
“The play opened my mind to how women perceive and think about things. I think we need a male version of the same play. I used to be one of those closed-up males but I’ve started having more meaningful conversations. I work in construction and we don’t talk about things that matter to us and so I think men are the loneliest beings on this planet. Men are not being honest with themselves, never mind the women in their lives. We only relate to women we think we can get something out of. This play taught me how unnecessary it is to take advantage of vulnerable women. The show invoked a great sense of responsibility in me. I’m only happy that I cannot be associated with being a rapist.”

Images via University of Johannesburg Artc & Culture on Facebook