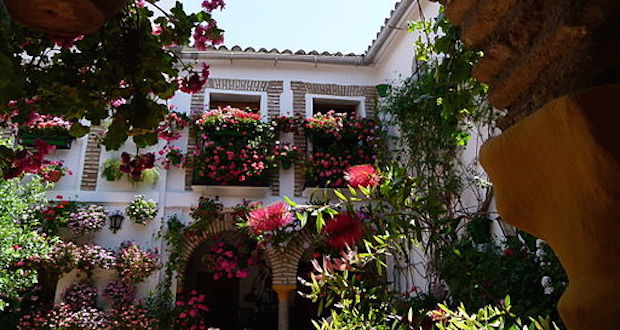 SHUBNUM KHAN was in CÃ³rdoba for the city’s famed PatioÂ Festival and came back with a kaleidoscope of colours and the smell of jasmine and geraniums seared into her memory.

In mid-May each year, the ancient town of CÃ³rdoba in southern Spain welcomes Spring with a two-week flurry of festivities that begins with a parade known as the Battle of the Flowers, where women toss flowers from blossom-covered floats to eager crowds.Â TheÂ May Crosses festival sees friends andÂ neighbourÂ working togetherÂ toÂ make and display 10-foot crosses festooned withÂ flowers. This is followed by the Fiesta de los Patios,Â the PatioÂ Festival of CÃ³rdoba, Â an intense local competition dating back to 1921 in whichÂ homeowners compete for the title of most attractive patio. An annual fair at the end of the month rounds out the festivities.Â It’s a manic display of blossoms and beauty and this May I had the pleasure of being in CÃ³rdobaÂ in the middle of it all.

The city, rich with Islamic and Christian history was considered one of the most advanced cities in the world during the 10th and 11th centuries. The medieval quarter of the city is a labyrinth of gullies that usually offer visitors just glimpses of the world famous patios through ornate gates. The contest, sponsored by the City Hall began as early as 1918. Patios have a long history in the city; CÃ³rdoba has the hottest summer temperatures in the country and the inner squares were built and filled with greenery and water features as a means to keep homes cool in the dry and hot climate. They date back to the days of the Romans, with Arabic influences and Moorish and Italian designs. Each courtyard is a feast of colours filled with columns, fountains, orange trees and balconies laid heavy with jasmines and geraniums. At some point these patios evolved and began to take on a life on their own, with residents preparing intensely for months in advance. Â The Patios Festival eventually became a means to share the fruits of their labour.

These days the festival is a serious tourist attraction for visitors from Europe and further abroad.Â DozensÂ of homes participate in the festival and visitorsÂ are given maps with routes to follow through the town’s narrow white washed lanes. The houses are usually open for viewing between 10 and 2pm and then close for sprucing up (and the Spanish siesta of course). TheyÂ reopen from 6pm until midnight on weekends.

Thereâ€™s no fee to enter but you can offer a donation if youâ€™re impressed with what you see. Itâ€™s a fun way to ditch the tourist experience and actually visit local homes with the unique opportunity to talk to locals, who are extremely friendly. The homeowners are convivial, proud to display their gardens to passing strangers and love to talk.Itâ€™s alwaysÂ wonderful when strangers welcome you into their homes but when itâ€™s done with this much joy and beauty, itâ€™s really something special.

As a South African, I was given particular interest: â€˜Ah, South Africa!, Wakka, Wakka! How you like our beautiful town?â€™ I had to agree that Iâ€™d never seen something as special as this.

The celebratory air extends with events running at different patios â€“ some hold musicians, choirs, singers, tapas tasting or if youâ€™re lucky, a flamenco show. YouÂ never really know what you’re going to find when you step into one of the courtyards.

At one particular garden, laden with lemons as large as dinner plates, I watched a choir of Spaniards from an old age home sing sweet church hymns as the sun set. And once after strolling the lanes (with ice cream and map in hand) I came across a group of lost Japanese tourists who accepted my offer as tour guide to the next few spectacular gardens. The old city around the magnificent Mezquita is a knot of tight streets (a car once got stuck ahead of me and eventually the crowd considered the possibility of climbing over the car to pass) and you can easily get lost but even that is one of the most rewarding experiences hereÂ -Â each turn takes you into pockets blooming with life; guitar players, old men playing chess, quaint churches, glorious mosques, ancient Roman bridges, charming squares and of course, glimpses into solariegaÂ (manor houses) with their breath taking patios.

The days are long, the sun sets late and wandering the cobbled Andalusian streets at sunset when everything -Â from pubs and restaurants setting up on the pavements, to groups of wandering young peopleÂ -Â seems to come alive, isÂ dreamy.

Shubnum Khan is a South African author, media studies lecturer, freelance journalist and occasional artist.Â You can follow her tweets on TwitterÂ or find her on Instagram.

– Featured image by Dinkum, via Wikimedia Commons, all other images by Shubnum Khan