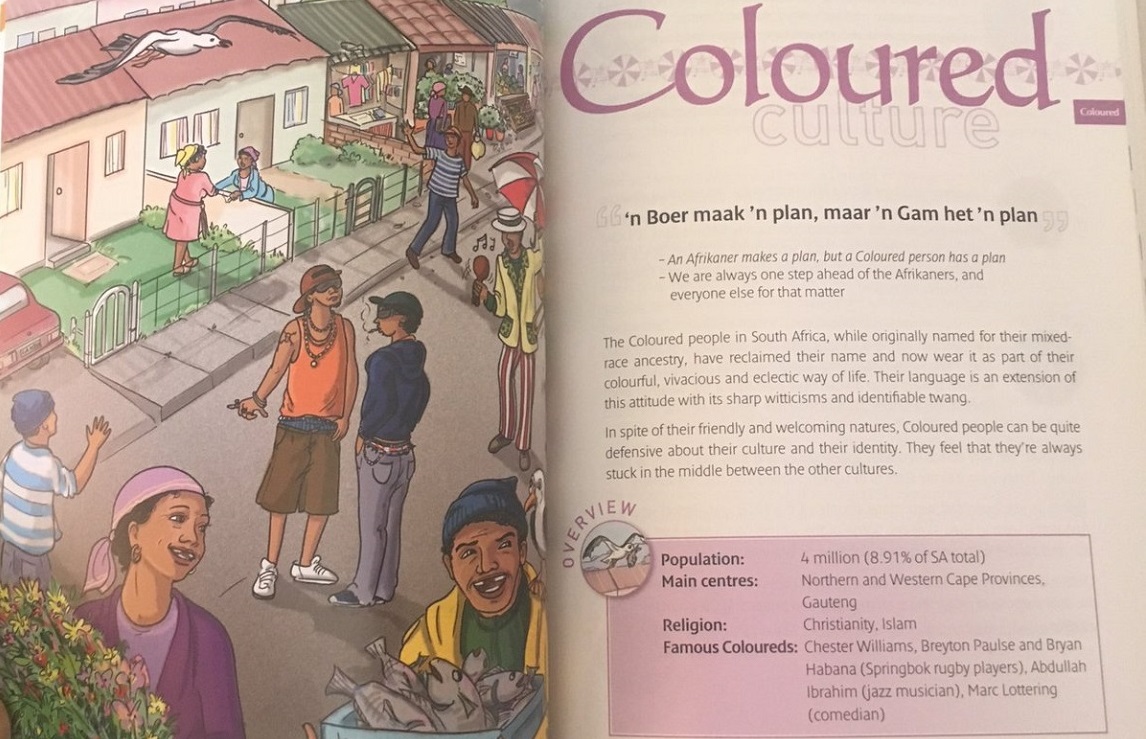 The need for black and coloured-owned book publishers has once again risen after Logogog, a Johannesburg-based book company, was accused of publishing a book that is racist towards coloured people over the weekend.

‘Coloured culture’ as portrayed in the book Rainbow Nation Navigation.
I thought it was satire but this is non-fiction pic.twitter.com/TU56DAV1bf

The book, titled Rainbow Nation Navigation Guide, created an uproar on Twitter after a series of excerpts from the book were posted on the social media network. In different sections, the book attempts to explain each South African culture. But these explanations have been received with anger for the way they depict coloured South Africans using unfounded generalisations.

Under a subsection called â€œbirthâ€, the Rainbow Nation Navigation Guide attempts to describe norms and customs around pregnancy and birth in coloured communities.

â€œThereâ€™s a little (unacceptable) thing called vat en sit, which refers to a man moving in with his girlfriend and, often, letting her pay for his expenses,â€ the book said.

But South Africans have said it misrepresents coloured people.

@KlapperOlieAfro I would love to know how @Paula_Marais is an expert on Coloureds. Pushing #stereotypes. This book is a disgrace. #racist

The book also includes an explanation of coloured women and their hair and the way young people like to â€œshow offâ€. There is no data within the book to support these types of descriptions.

Paula Marais, one of the directors of Logogog responded to the outrage on Twitter. Marais said that her brother had travelled the African continent and wanted her kids to learn about South African cultures. The book was inspired to meet that goal.

â€œ@easyleesie so sorry you feel this. All based on interviews w Coloured people. Each sectn written then checked by people frm that culture,â€ she wrote.

â€œ@BabaloNdenze so educate me. That was the point. We wanted a book to start a dialogue to understand. So email with changes you need made.â€

Marais has since seemingly disabled her Twitter account. Although she said that she was not the person who wrote the section on coloured people in the book, she has been criticised because of her position in the publishing company that is responsible for the book.

You’re the director of the company that published it.

Don’t pass the buck by saying you didn’t write *that* chapter. https://t.co/Xg0o6JBoK7

The incident, however, follows from numerous events within South Africaâ€™s literary industry calling for more transformation in the sector. Author Thando Mgqolozana announced at the 2015 Time of the Writer festival in Durban that he was quitting book festivals that were mostly white.

At the time, he was referring to the Franschhoek Literary Festival in particular, which was set to kick off a few days later. Mgqolozana explained his decision in an interview with The Daily Vox, saying his call was for decolonisation of the book industry in South Africa.

The Abantu Book Festival was inspired in part by Mgqolozanaâ€™s move. The book fesitval took place in December 2016 in Soweto, Johannesburg with the goal to â€œset up a literature event that provides black writers and readers the platform and visibility they deserveâ€.

South Africaâ€™s literary landscape has seen tumultuous times. It was only in 2007, that local book publishers placed restrictions on the comic Tintin in Congo after British bookstore Borders removed the book from their childrenâ€™s section because customers said it was racist. At the time, an Afrikaans publisher, Human and Rousseau, were considering releasing an Afrikaans version of the book.

Outrage against books that are defamatory towards black and coloured people has become more pronounced in recent years. In the case of Rainbow Nation Navigation Guide, an amandla.mobi petition demanding the bookâ€™s removal has already garnered more than 1, 000 signatures.