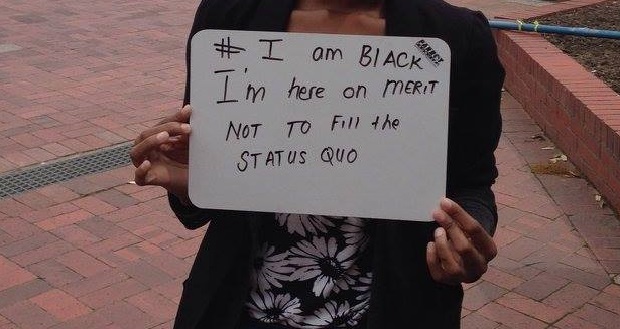 Gosiame Legoale says that those who live in close proximity to privilege need to interrogate their behaviours.

Proximity to privilege comes with complimentary blinkers and I’m from a class that gladly dons our blinkers. With our blinkers on, we become the harshest critics of those who operate a class below us. Empathy, it seems, becomes more of a novelty the higher up the food chain you get.

White people are born into privilege and can largely get away with casting a judgmental eye on the plight of the poor and less fortunate. They make little effort to recognise the foot up they’re afforded from birth – or the generations-deep ditch that the poor must dig their way out of just to get an even footing. It’s simply not their concern. The ever-expanding gap between the haves and have-nots is no longer their burden to bare. It’s potholes that matter, not the fact that we’re still living in an unequal society.

It’s been 20-plus years in the so-called democracy that promised change, but only a select few benefit. For some black people, who may find themselves but an arm’s-length from those benefits, our view is that it’s only hooligans who burn down buildings in protest of a state that still leaves us largely oppressed. Our concerns are for insured buildings and the unsettling effect arson has on those with reservations at the dinner table. Ours is a condition largely accepting of the status quo simply because we’re satisfied with the crumbs that fall from the tables of the privileged. We incorporate their fears as our own; their whims become our whims, we perpetuate the class divide and inadvertently justify their stance on whiteness.

Theirs is a belief that the privileges that come with whiteness are a myth, and the closer we are to their orbit, the more we reinforce their illicit views. When students at Pretoria Girls High stood up to fight systemic racism, decades after the first black pupils matriculated and moved on, it highlighted how we’ve accepted the status quo, and how we’ve become the protectors of that privilege.

During conversations about rugby, we pose as the flag bearers for the term “merit” and conveniently ignore the racially charged connotations of the word. We call into radio stations and lament how those who want their voices heard continuously compromise rules that were never set with them in mind the first place. We cannot fathom the disdain they show the systems currently holding them hostage; the very systems that have us exhibiting traits of Stockholm Syndrome.

The current mood in the country is of frustration and angst. This is the holding pattern we’re stuck in since we were sold the urban legend of the rainbow nation.

We see it in self-serving leaders for whom empathy with the poor and working class is no more than a matter of political gain. We judge people’s intelligence based on their accents. We engage in poverty shaming without a thought because we’re afraid of embarrassing the kind hosts that have us feeding from the edges of their dinner table.

Our borrowed privilege must taste so nice.