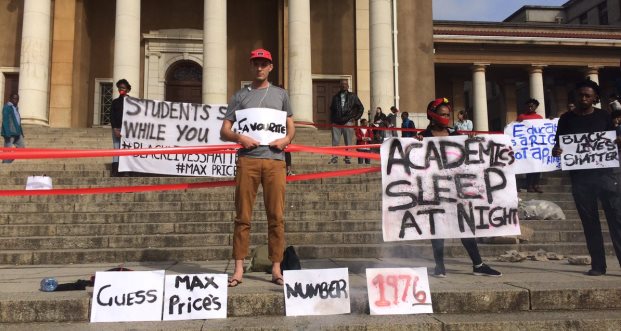 On Wednesday, the University of Cape Town (UCT) shut down all its campuses for the remainder of the week. UCT had attempted to resume academic activity this week despite attempts by protesters to disrupt classes.

The university says it has reached a point where the only way they can maintain order is to increase security and allow intervention by the South African Police Services. This would only serve to aggravate the situation and could lead to serious injury and â€œeven lives being at risk.â€

Early on Tuesday evening, protesting students tried – unsuccessfully – to reoccupy the Steve Biko Studentsâ€™ Union building which they had been â€œunlawfullyâ€ occupying for the past couple of weeks.

According to a campus announcement sent out by UCT spokesperson Gerda Kruger, â€œthe building was secured with new locks and private security were placed at entrances to ensure the group did not reoccupy the building.â€

After midnight, a group of about 200 protesters again attempted to reoccupy the building and clashed with campus security.

According to News24, stun grenades and teargas were fired in an attempt to disperse protestors.

The University called the South African Police Services (SAPS) to bring the situation under control. All the fires were extinguished.

Arrests
So far, eight students have been arrested at UCT this week.

Six of the eight students have since been released.

In an announcement made to the campus community, Price said that UCT will institute disciplinary action against the eight students arrested this week. â€œWe are reacting to the interferences with teaching and operations in a manner that avoids, at all costs, actions that will provoke violence,â€ he said.

According to student activist Chumani Maxwele, known for his involvement in the #RhodesMustFall and #FeesMustFall protests, the university has reopened without addressing studentsâ€™ and workersâ€™ demands, and students are now protesting for the university to address these.

Some of their demands are for the university to lift the internal and external charges on protesting students and to allow the students and the vice chancellor to engage in a truth and reconciliation commission. The commission will serve to iron out all issues that took place during the #Shackville protests earlier this year, when students erected shacks on campus to highlight housing issues.

Although the university has agreed to engage with the students concerning #ShackvilleTRC, according to Maxwele, such a commission cannot convene unless the suspensions and expulsions of protesting students have been lifted.

â€œThere is no way that you can have talks with criminals; the university has criminalised students,â€ he said.

Students also want the removal of private security and police, which they believe has militarised the campus.

Maxweleâ€™s calls for reconciliation and the demilitarisation of campus echoes a resolution taken by the Deanâ€™s Advisory Committee of the humanities faculty last week.

Maxwele said university management need to â€œcome up with visionary leadership, engage the students, be in the forefront and ask what is the problemâ€.

On Wednesday, the university attempted to operate as usual with a heavy police presence, despite the student demonstrations around campus.

Several students on the stairs at #UCT are standing firm holding placards relevant to the demonstrations @News24 @News24_SA pic.twitter.com/QgAdOGLoIR

A mass meeting was also held at the Leslie social science building, also known as Saartjie Baartman House, on upper campus where Dr Lwazi Lushaba addressed the collective. Some of the topics that were addressed include black suffering, the criticism of black vice chancellors, who the students feel failed to uphold their cause, and calls for black academics to boycott teaching.

Vice chancellor Max Price is due to meet with protesting students outside Bremner House on Wednesday afternoon.