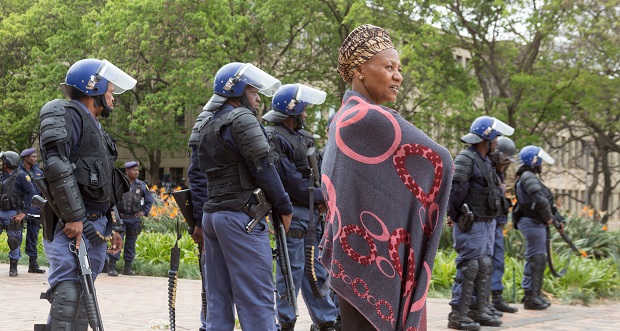 “Iâ€™d like someone to show me who my breasts shot. Iâ€™d like them to lead me, by hand, and take me to the grave of the person who died from bullets fired from my breasts. I want to see this awful sin my breasts committed. I want someone to show me the minutes of the meeting where my breasts refused to deliver on the promise of free education” Â – bare-breasted protestor Lerato Motaung

On 4 October, Wits University was a war zone. Private security guards and members of the South African Police Service (SAPS), under the instruction of Wits University management, spent the day shooting stun grenades, rubber bullets and tear gas at students who had gathered to protest on campus. After hours of violent engagement, three womxn* emerged bare-breasted from the picket line and walked towards the police, calling for restraint.

The womxn – Sarah Mokwebo, Lerato Motaung and Hlengiwe Ndlovu, active Fees Must Fall members who have come to be known as the â€œnaked protestersâ€ – told The Daily Vox how they used their bodies in protest to call for a ceasefire.

They said pickets are a violent space for womxn as it seems they are not expected to be there.

Asked about her experiences at the frontline, Mokwebo said: â€œAs womxn, you canâ€™t negotiate to control the space but you have to fight for it. Power is not something they willingly give to you, I have to use my body in unconventional ways to get recognition.â€

They tell me about the kind of resistance they experience, despite the fact that more womxn have been positioning themselves in front of the firing line.

Motaung said the days when womxn were the revolutionâ€™s appendages are long gone.

â€œWho owns the picket lines? Who owns the glory of oppression, as if our pain is not worth putting on the agenda? Whose pain is worth relegating to the back? No one is going to carry us to this mythical place called freedom but ourselves,â€ she said.

Their decision to confront the SAPS and to call for a ceasefire was because of the disregard they have shown towards womxn protesters.

Their experiences in the protests have been violent and dehumanising, and they have been sexualised.

Ndlovu said that she is one of the people who have been violated by police on campus.

â€œWhen the police started camping here for this particular protest, one of them approached me and grabbed my arm. I told him to leave me alone but he continued following us. He approached me again and locked his arm around mine. I asked him why he was harassing me and he told me if he likes something he is allowed to express it. I felt so offended. They have been verbally abusing students on campus and threatening us with rape,â€ she said, voice trembling.

Ndlovu said the armed police have intimidated and assaulted students and workers alike.

Mokwebo said women students have suffered the highest casualties in the protest, citing allegations that police raped a womxn at UKZN.

â€œThe female body, as a battle ground, is already maimed,â€ said Motaung. â€œBefore we even go in, we know the stakes. In the same way we fear the streets after dark, we fear men in riot gear sent to us by the pillars of patriarchy.â€

The protestersÂ say they decided that reclaiming their bodies in the space was the only way to mitigate the onslaught from police; they realised that they had to use their bodies in unconventional methods to call for peace. Ndlovu describes their protest as â€œan act of defiant resistanceâ€.

â€œPeople think a womanâ€™s body is powerless. We wanted to show the vulnerability of women in the space and the police actually stopped shooting after our protest,â€ she said.

â€œI want Habib himself, to come to me with a gun in his hand and shoot me. Stop sending black men to do your dirty business. Spill the blood yourself. Let your hands handle this sin, and live with it,â€ she said.

Responding to the social media responseÂ to their protest, the womxn said that theyâ€™ve endured so much violence, and were only expecting more, so the least they could do for themselves was to stay off social media.

Mokwebo said she expected the response but also felt that they protests had been portrayed incorrectly. â€œI was really hoping media houses would unpack the politics of a woman going nude correctly. I donâ€™t think there is anyone who is in a much better position to educate society than the media,â€ she said.

Still, they remain committed to the call for a free decolonised education.

*This is an inclusive term used by feminists who feel that having the word “man” in the word “woman” makes women a subset of men.