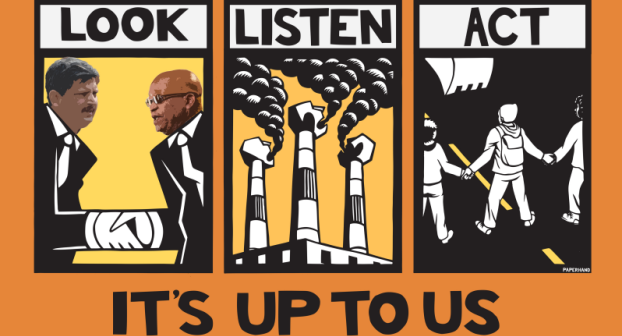 The Break Free from Fossil Fuels Campaign has the Gupta family in its crosshairs. According to 350 Africa.org, they represent the damaging system that keeps coal alive. On 14 May, people from mining-affected communities, civil society organisations and ordinary citizens will stage a peaceful protest to the Gupta compound in Saxonwold, to make a stand against corruption and dirty deals in the coal sector. SIMONE MATIKA explains why.

Why the Guptas?
The Guptas, infamous for their close business-government relationship have become the poster child for everything that is wrong in the mining sector, in particular the coal industry. Their ever-expanding coal business has greatly benefited them as they own a quite a number of mines in South Africa.

So which mines do the Guptas own?
Optimum Coal mine, which the Guptas recently acquired, supplies Eskom with coal. There have been a more than a few speculations around this deal regarding the Guptasâ€™ relationship with government.Â The family also secured a stake in Richards Bay Coal Terminal and have acquired the rights to export eight million metric tons of coal through Africaâ€™s biggest port for the fuel.

The Guptas also have ownership of the Brakfontein colliery which feeds Komati coal-powered station and Koorfontein coalmines. All these deals being questioned by the public because of the connection this family has with the government.

What are the environmental impacts of burning coal?
The impacts are of the coal sector on air pollution are huge. In South Africa, coal-fired power plants contribute approximately 60% of particulate emissions, over 80% of mercury emissions, 45-50% of sulphur dioxide emissions and 30% of nitrogen oxide emissions. Basically, coal is dirty, and it makes our air dirty.

So why is this protest taking place?
As a result of the environmental cost, plans to build new coal-fired power plants and coal mines are meeting fierce resistance all over the world, and South Africa is no exception. The local protest against these new coal developments is part of a bigger movement happening globally. Break Free is an unprecedented global mobilisation campaign aimed at keeping fossil fuels in the ground. The aim is to demonstrate the resolve to break free from the shackles of polluting fuels.

The protest is taking place on 14 May from Zoo Lake to the Gupta compound in Saxonwold from 9am – 1pm. For more details, visit the Breaking Free From Fossil Fuels website.