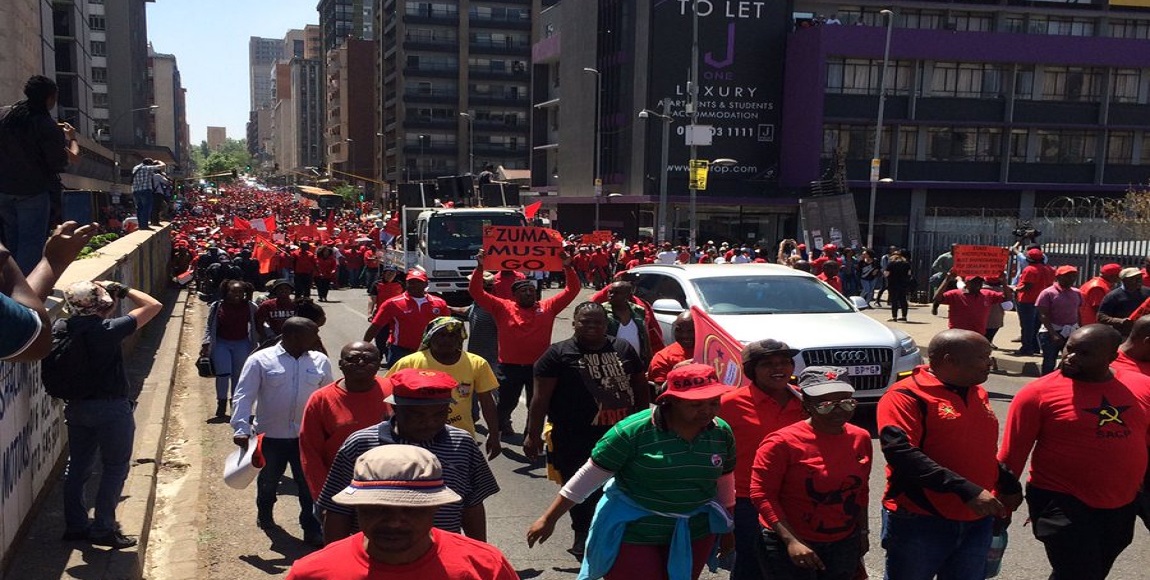 As the ANC elective conference approaches, the alliance partners are increasingly mobilising behind Cyril Ramaphosa, rather than Nkosazana Dlamini-Zuma, the Zuma campâ€™s preferred choice. At all of the marches on Wednesday, groups of protestors chanted â€œWe are ready for Ramaphosa,â€ and when Cosatu President Sidumo Dlamini addressed the crowds in Durban, he said that Ramaphosa should be allowed to lead the ANC. Whether the Zuma camp will be shaken by the events of today remains to be seen.

The Daily Vox reporters were on the ground to speak with protestors.

Marches singing “we are ready for Ramaphosa” #CosatuStrike in Johannesburg pic.twitter.com/VySPv2G5bJ Bonginkosi Mrasi (29), national youth secretary for NUM
Workers are protesting all over the country. Workers are here to demonstrate their frustration and anger against the continuous corruption in the country. We are here to indicate to government, to business, to everyone that we are sick and tired of state capture. Our government is captured by the Gupta family. Workers are here to say enough is enough. We need a government free of corruption. All the deals that are made through government impact workers and citizens. The monies that are being looted are the workersâ€™ money. They need to be able to support the march and stand for the position of Cosatu. We want to shake business, the government, and indicate to the president and ANC that workers are tired. They want change. Victor Ngwane (29), regional committee member for the Pretoria West Rand region
We are here to support Cosatu and make sure our voices are heard on the issues of state capture and the leadership that is already captured. The president canâ€™t hear us when we are saying things on the sidelines; these marches should demonstrate to him that the country is fed up. The alliance [partners] – Cosatu and the SACP – we are all fed up. Zuma must step down because he is clearly captured. His actions raise a question as Cosatu to say, what are we standing for? Are we really protecting workers? Are we allowing leaders we voted for to loot the country’s coffers? After this protest, a message will be sent to the president. People will have a clear indication that Cosatu is not part of this state capture, it is against it. State capture starts at lower stages like in unions – if we donâ€™t control it, we are a doomed country. Thabsile Zungu (50), admin clerk
I’m here today because I don’t understand what they mean when they say they will take our money and give it to SAA.We are tired of labour brokers. We are also tired of state capture. If the government could allow outsiders to come into the country and run it, why can’t they go to the Guptas and ask for the money to bail out SAA? I don’t understand why government should punish us for its own problems. Also, as workers, we are ought to be consulted on our own money because at the end of the day, it’s us who vote. This is only the beginning, we want the government to listen and hear us perfectly.

An idea of the numbers at the #CosatuStrike in Cape Town. pic.twitter.com/c2coOtvm5b Mark Klaassens (47), New Methodist Church chairperson, former Cosatu
Iâ€™m here for safety for commuters. The conditions of the trains are full and overloaded, people are sitting on the roof, people are dying. The late trains are not good for the people. People pay for the tickets and Metrorail and Prasa donâ€™t provide the services. Iâ€™m also here for state capture. Itâ€™s time for the president to go. This is Cosatu saying the president must go in the open. The ANC in the Western Cape never supported Zuma, we supported Kgalema Motlanthe. I can honestly say the way the ANC is going is not right. Mncedisi Mbolekwa (49), provincial secretary of Cosatu in the Western Cape
We are saying, â€œDown with state capture, down!â€ We are saying, â€œDown with corruption, down!â€ Zuma must go now! There must be no state capture, there must be employment of our people. We must fight crime in this country. We must create land for our people. The minimum wage is a start, we will build on it. Iâ€™ll vote for the ANC in 2019, thereâ€™s nothing wrong with the ANC. Itâ€™s only individuals and we are going to vote them out. The ANC is a good movement of our people and is more than 100 years old. We are going to vote for the ANC for life.