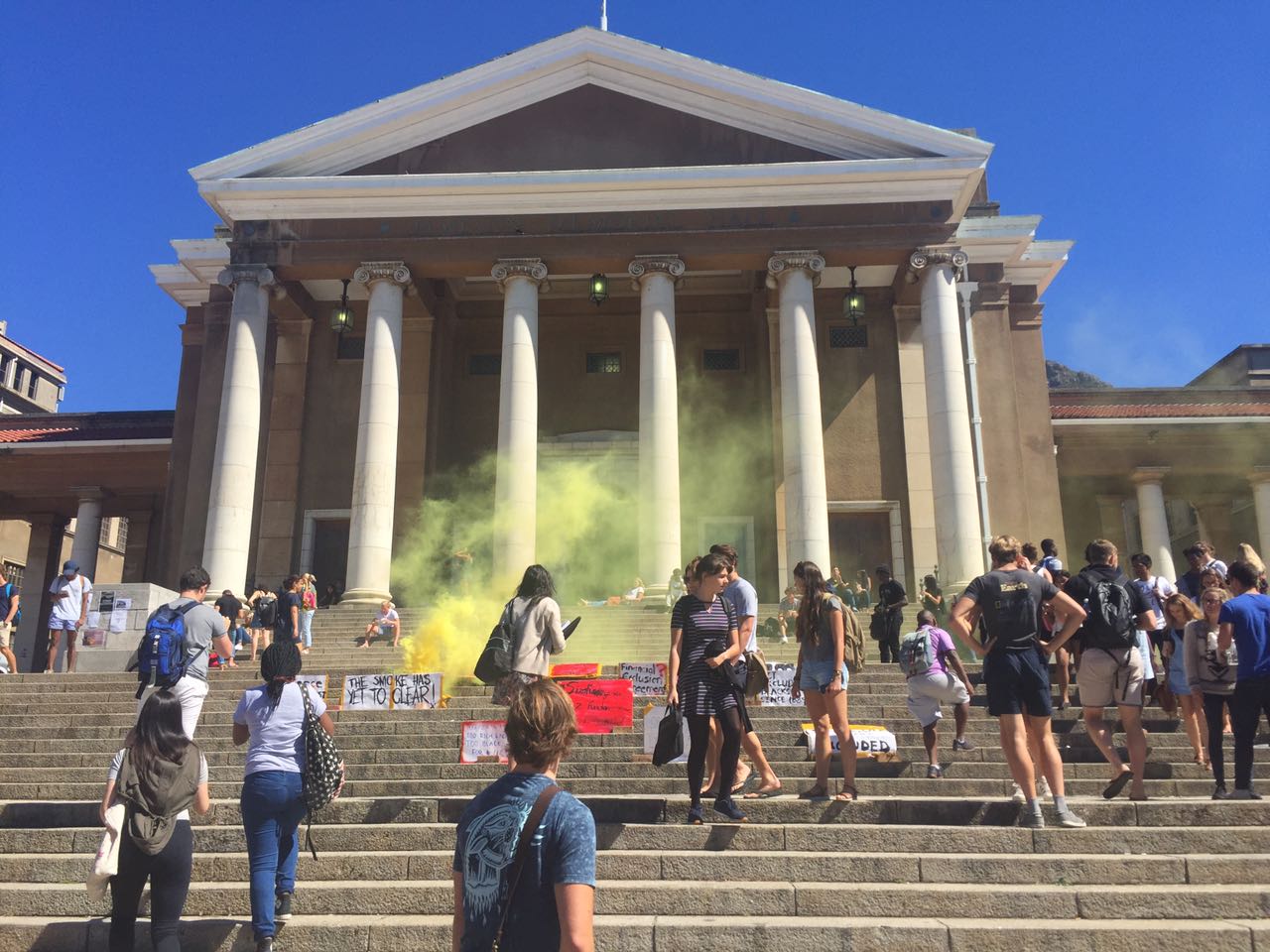 While the country paid tribute to Ahmed Kathrada after his passing on Tuesday, a number of protests were taking place on campuses across South Africa. With student activism being an issue close to Uncle Kathyâ€™s heart, The Daily Vox team rounds up at what’s been happening at the University of Venda (Univen), University of Cape Town (UCT), and University Currently Known As Rhodes (UCKAR) since Sunday.

Activities at Univen were shut down on Wednesday as a result of protests. Students have been protesting at the campus since Monday over National Students Financial Aid Scheme (NSFAS) allowances not being paid, the safety of students, outsourcing of workers and the unequal treatment of students at the university, as opposed to other universities by NSFAS. Students also claim that the university is slow to build residences.

Univen spokesperson, Takalani Dzaga says that the university management met with students on Wednesday, but no formal submissions were made by the students. He says that the main reason for the protest is late payments of NSFAS allowances, but that the process of payments is underway. However, the deputy president of the SRC claims that the pertinent issues have been raised with management.

As part of the protest, residences have also been going without being cleaned since Monday. Students have been blocking entrances, damaging university property and clashing with police since Monday, but according to Limpopo police spokesperson, Lieutenant Colonel Ngoepe, the situation had calmed by Wednesday afternoon. On Tuesday night, four protesters were arrested on charges of public violence and will appear in the Thoyohandou magistrates court on Thursday morning.

According to Sipho Mavhungu, a student formerly on the SRC, students have been injured by rubber bullets shot by police, but Ngoepe denies any injuries and would not be drawn on the deployment of rubber bullets and teargas by police.

The revival of #RUReferenceList seems to be brewing at the university currently known as Rhodes, after Sunday night saw a spontaneous march around campus, trailed by police cars. The march occurred with the intent of gathering support and awareness for the continued culture of rape and rape apology at the university, despite the #RUReferenceList protests last year which saw the university shut down for weeks. UCKAR management has created a task team to deal with the issue of high rape statistics and little consequence for rapists, but students claim there has been little progress or information available to them about measures implemented. With rape on campus happening everyday, and little support for survivors while rapists are free to do as they please, it seems that anger and energy is rising yet again. However, a disclaimer included on the universityâ€™s registration form forbids protest on campus, with consequences of exclusion for those participating. But bureaucracy and policy do little for actual human lives, and students are tired of being silenced.

A Fees Must Fall plenary is being held on Wednesday afternoon to address UCT students facing financial exclusions, and Israeli Apartheid Week is also underway at the university. A simultaneous protest is being staged on the Jammie Plaza, with students from the Palestine Solidarity Forum (PSF) joining forces with students protesting for the Fees Must Fall (FMF) movement to defend the space together.

According to student, Ayesha Tape, students signed agreements last year agreeing that they wouldn’t be financially excluded, but some students are still being financially excluded and barred from campus. Simultaneously, the Palestine Solidarity Forum is hosting Israeli Apartheid Week on one section of the Jammie Plaza, while the South African Union of Jewish Students hosting a pro-Zionism campaign, has the other.

The PSF have decided to protest the fact that the space has to be shared by erecting their displays in the centre of Jammie Plaza, which is parallel to the Jameson Memorial where the Fees Must Fall plenary will be happening.

Students are using teargas as a mechanism for protest, and posters that reads â€œthe smoke is yet to clearâ€.

According to Tape there is no violence, but a lot of heated engagement due to the double protest happening at the same time.