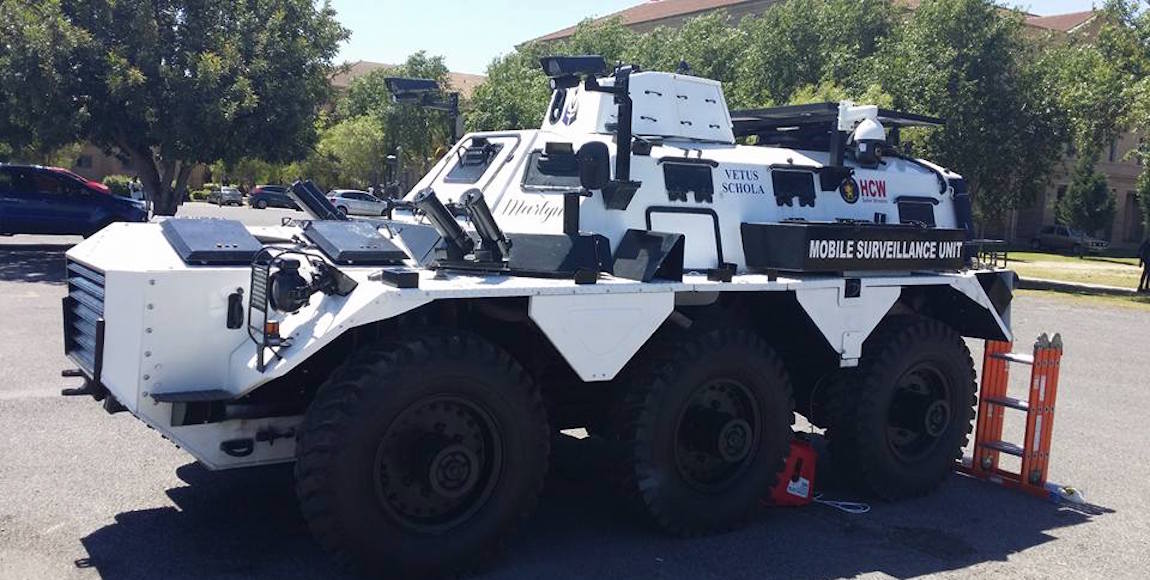 After weeks of ongoing tensions, four expulsions, petrol-bombed buildings, the resignation of a dodgy vice chancellor and the temporary closure of campus due to escalating protests, Cape Peninsula University of Technology (CPUT) campuses finally re-opened on Wednesday. Management reported negotiations had taken place with students, which meant that the storm had finally passed. But that was hardly the case. At a mass meeting on Wednesday, students made it clear that CPUT would not return to business as usual until a university general assembly is held to address pending issues they refuse to abandon.

Entering CPUT Bellville, you immediately got the impression that the situation was abnormal. On Wednesday the campus gates were guarded by eight armed men, dressed in full military attire. The armed men are from private security company Vetus Schola, the firm CPUT has hired, allegedly for millions of rands. The armed men searched every car and turned away any visitor who did not have adequate reason to enter the university. If you were unaware of the context, youâ€™d think you were at a border crossing â€“ perhaps even entering an occupied territory. But inside the campus, the environment was deceptively calm. Students and staff casually strolled about in what seemed a quiet learning environment. It was only upon closer examination that you realised there was a lot more going on. Besides the obvious holes in windows from stone barrages, the men in military gear guarded certain buildings. Every few minutes a large armoured vehicle drove by on patrol, while large armed men were stationed at various points, their eyes scrutinising whoever walked past. It soon became clear that this was not the quiet environment of a calm learning space, but rather the quiet of anxiety and tension from having a small paramilitary force looking over your shoulder. Most interesting was the presence of a tank-like armoured vehicle stationed between the residences and student centre. It was notably different to the hippos and nyalas South Africans are used to seeing. One of the security guards commented that it was British-made. One could only wonder what its original purpose was for. At the student mass meeting, they first dealt with the banning of two Sasco students from the movement. The students were told to leave the space for going behind the movementâ€™s back to negotiate with management without consulting the mass movement itself. One of the leaders emphasised that the issue of partisan politics continued to plague the student movement by bringing in foreign agendas. He said that the plight of the poor black students could not be won by any party or leader representatives, but only by poor black students themselves.

The meeting clarified that, in spite of contradicting reports, students had not resolved a number of issues with management. Their current demands included:

The university general assembly was the focal point. The students wanted an open and democratic space where all could engage on the above matters, and did not want to continue going to classes under the current context of unresolved issues and while having armed men intimidating them. They spoke of raids that took place every night in residences where dogs were brought in to search through their belongings. They say this was dehumanising and a breach of their rights and dignity. They wanted the ongoing confrontations to end, but would not do so until their concerns were resolved. After the meeting the students resolved to peacefully walk to the administration building and sit outside on the grass while one of them requested a representative from management to address them on organising the assembly sometime this week. This happened without incident. Although Vetus Schola surrounded the students with their armoured vehicles as they gathered, they did not interfere with the students as they awaited a response from management.

Outside the campus gates students and workers from the University of Cape Town (UCT) had arrived to protest the continued use of Vetus Schola as a replacement to public order policing. As has been argued elsewhere, Vetus Schola has a murky track record in quelling protests and students have said they represent the university resorting to apartheid military tactics on students.

On the situation on campus and escalating violence, a CPUT student leader said most students were now unfazed by the situation.

â€œThis has been going on since June. Thereâ€™s no more fear because violence here has become normal. We operate and live in this police state,â€ he said. After about an hour of waiting on the field, the CPUT students were informed that management refused to meet with them. This visibly upset the students who said that theyâ€™d made attempts to engage openly, only to be set aside again.

â€œWe should not be worried by managementâ€™s response, itâ€™s not a matter of refusing us. By the end of this week there will be a university general assembly. They made this campus a war-zone. We have tried for peace, now we must respond in kind,â€ a student leader said.

Not long after, shots could be heard from across campus. Students fled the area as Vetus Schola officials pursued them. At the staff parking more than four vehicles owned by CPUT staff members had been hit with stones â€“ their windows and windshields destroyed. One of the staff members, a secretary working in the administration building, broke down in tears after seeing what had happened to her car.

â€œI donâ€™t understand. I had nothing to do with the studentsâ€™ issues with the management,â€ she said.

She said it was likely that the students were targeting other cars and that hers was collateral damage. Other members of staff soon congregated around the vandalised cars, most were visibly angry.

â€œThey [management] said it would be safe for campus to begin again. How is this safe? This has gone too far now,â€ one commented.

Others questioned the logic behind spending the amount of money on private security companies if this was still the end result. Close to the end of the afternoon most activity on campus had died down. Thereâ€™s little doubt that going into the rest of the week, the situation at CPUT campuses is likely to continue escalating. Thereâ€™s likely be more damage to property, something we can readily measure. Whatâ€™s more challenging to measure, though, is what effect ongoing militancy has on young people – and what it means for us to have normalised a pseudo-military presence in our spaces of education.