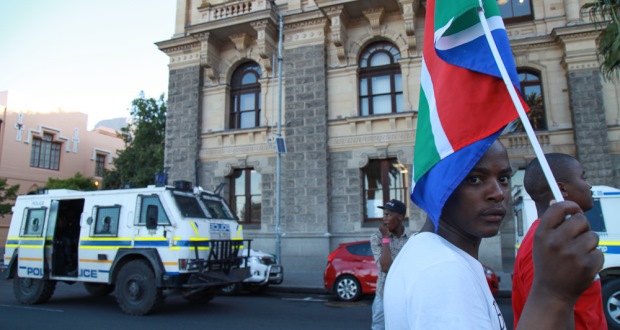 The Cape Peninsula University of Technology’s decision to move some of its exams to the Wingfield Military Base harkens back to the student protests of the 1980s and tells us something more about how race has played out in the student protests that continue on some campuses across the country, TARRYN DE KOCK.

OnÂ Friday, the Cape Peninsula University of Technology (CPUT), announced that exams scheduled to be written this week would be moved to its Bellville campus and the Wingfield Military Base in Goodwood.

Wingfield is a site Iâ€™d heard about from my parents, older family members, and teachers while growing up. It was where high school and teaching students were sent to write their exams, under heavy military guard, at the height of the student protests in the 1980s.

The decision to move exams for CPUT students to a venue like Wingfield recalls a dangerous historical precedent while highlighting an ongoing challenge black students have faced in the course of protest action: the higher likelihood of being met with brute force than their peers who are white or from elite institutions.

While protests at elite universities have largely simmered down over the last few weeks, protests at black universities have continued. There has also been increasing violence, whether on the part of police and hired security or frustrated students who face intimidation, and a silencing and ignoring of the protests on the part of management. The failure of university management to adequately respond to studentsâ€™ demands has only fuelled their anger, and this too has gone unreported.

What has become common knowledge is that black student protestors are destructive, thieving, dangerous criminals who should be met with force to protect the innocents who want an education. As with all forms of knowledge, this cannot be taken as the truth.

The criminalisation of black protestors began long before #RhodesMustFall and #FeesMustFall became the major movements of 2015, but what the student protests showed was the complex relationship of violence to whiteness, juxtaposed with blackness.

Despite a crowd of students managing to make it onto the grounds of Parliament, not a single rubber bullet was fired. White students from the University of Cape Town formed a protective guard around their black peers both that day and a few days earlier at the Rondebosch police station.

I was one of the students at Parliament that day. Compared to the sounds of stun grenades and rubber bullets going off at CPUTâ€™s Cape Town campus a few days later, the police at Parliament were almost restrained.

The same rings true for the aggression and intimidation that students at the University of the Western Cape (UWC) have been met with in recent weeks. T

All students involved in these protests have suffered traumatic experiences. The onslaught against black students from poorer institutions, however, has been undeniably greater.

It would be perilous to underplay the importance of exams being moved to Wingfield, where any attempt at disrupting examinations will take place in one of the most militarised of spaces in the Western Cape. The institution has also promised â€œa sizable SAPS presence, extra private security and our own campus protection teamsâ€. An electronic archive of riotsÂ in the Cape in the 80s describes a similar security presence at the base during exams at that time.

Despite being the generation of activists, students and leaders of the 70s and 80s, the present government continues to criminalise the behaviour of those who follow in its footsteps. The key difference, which we would be foolish to ignore, is that the post-1994 South African state holds greater legitimacy in the eyes of its people than the openly racist, white- and minority-controlled apartheid state.

That student protestors have now challenged the foundations of the agreements that led to South Africaâ€™s liberation means that the government has to smash the protests in order to maintain its shaky grip on power. Deciding to hold exams at a military base is both a challenge to the strength of the CPUT movement and a threat that may hold unforeseen consequences if it is realised.

The decision not to increase fees in 2016 was meant to halt the momentum of the movement. It had the effect of dividing it along already fractured class lines. Elite universities were able to continue with business as usual, despite some protests by students. Movements at poor and historically black universities knew that the stakes were higher for them, and capitalised on the momentum gained from the #NationalShutdown to force their managements into a conversation about the future of students in the most vulnerable of tertiary institutions. Unfortunately for them, for the most part, the cameras that had just weeks ago focused on the student movement have been turned off or turned the other way; students have been left to fight this battle on their own.