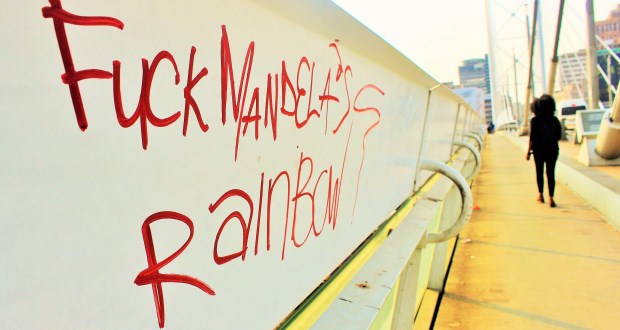 This week has been a rough one for the â€œrainbow nationâ€. First, Mabel Jansenâ€™s Facebook remarksÂ had the country outraged, and then Florence Masebe spoke out about a racist incident on a Mzansi Magic TV show set. So how should we deal with racists, 22 years after democracy? KWAZI DLAMINI asked some Durbanites whether they think racism should be criminalised. Siphokazi Madikizela, 24, student, Clermont
I think any form of racism is bad for our country, especially after we have been through. It is painful to know that some white people still hate us so much. What also makes it so bad is that these racist people express their hatred on social media where we have 13- and 14-year-old kids who will see this and think it is a normal thing. A person is never born a racist but they learn it from parents, friends or the society. Now if someone posts something with so much hatred on Facebook they are doing more damage to our young people. It makes us ask ourselves why did Tata Nelson Mandela allow reconciliation if they are going to continue insulting us. Racists should be talked to because we cannot chase them away, we need their investments in our country. There is no need for jail because they will get better treatment in there. Nosipho Mzotho, 22, student, Westville
Racism must not be tolerated and people must stop it; we should work together and stop discriminating against each other. Iâ€™m studying psychology so I think they need to be taught that as people, black, white and coloureds can work together to achieve the common goals we have for the country. If they criminalise racism I think the sentence should depend on the case. If the incident led to someone losing their life or led to a physical altercation then they must get more years in jail. If they just said words, it should be a lighter sentence. By then they would have learnt their lesson. The aim is not to prove a point but to educate people about the consequences. If someone racially abused me I would just keep quiet because it is more likely that I will not have proof. Samuel Ndlovu, 25, messenger, Merebank
I think it is a good thing that racists are finally showing themselves. This has been going on for a long time, but behind closed doors; it is a bad thing for our country, and more importantly, our so-called democracy. I think racists should be jailed for the longest time just to send a message to those who are still hiding themselves. They should be given 25 to 30 years in jail because being racially abused is a painful thing. I did not choose to be black so I should not be made to hate my skin colour. If someone racially abused me I would probably abuse them back but whatever I say to a white person will not be as hurtful or effective as being called a â€œmonkeyâ€ is to me. Wellington Zulu, 23, student, Umlazi
This is nothing new in this country; a lot of people get racially abused but itâ€™s just not reported. The problem is also with us black people – we have this slave mentality that white people are superior than us, we even treat them differently. I once had an argument with a lady at one of the biggest supermarkets in the country. I was standing in the queue to pay, then the cashier told me to wait aside so that she could help a white guy who was behind me. That shows the mentality – we have no respect for our own. Racists must be locked up, maybe for a maximum of six months in prison so that they will learn. If someone racially abused me Iâ€™m afraid I would lose it, maybe end up beating them up then I will go to jail. But thatâ€™s how angry this racism thing makes me. Yoliswa Dlamini, 25, student, Umlazi
Racism is the biggest issue in our country right now and it is revealing itself slowly; the cracks of our so-called rainbow nation are starting to show. It was never dealt with accordingly. A racist must be taken to prison and spend time there until they come back to their senses. If someone racially abused me, I would not give them attention I would just walk away but of course I would be hurt. If I open a case, that would be too much for me – I canâ€™t deal with all the trial process. If I beat them up I would get arrested so I canâ€™t do that too. So right now I canâ€™t really defend myself from racism.