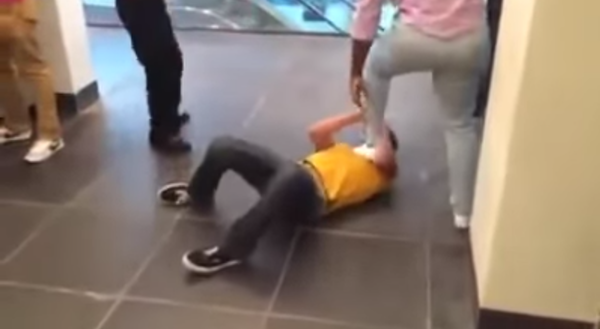 It seems hardly a week goes by without another racially charged incident making the news in SA. This time it’s a video showing an altercation at an ATM machine at Cape Town’s trendy Cape QuarterÂ shopping centre. The video begins with swearing, progresses to repeated shouting of the k-word, and culminates in the slur-spewer being knocked out by a kick to the head.

(If you are still curious, you can watch the video below. Alternatively, just take our word for it and just skip to the comments on the video, which are, at least in some respects, less disturbing and more interesting.)

Commenter Jenna Jay Lange, who claimed to have witnessed the incident, provided some background to the incident/

I wish this video showed the full context. I was there. Not only were these 2 “men” racist before they started with the K word they were offensive to the women in the queue as well. The name calling went on for about 3-5minutes before this guy actually got physical with him. This altercation and screaming started simply because we asked them to hurry up after waiting 6 minutes while they fumbled to draw money in their drunken state. Also post this the security guard helped this guy up and a few minutes later we watched him scream at the very same security guard saying he was useless and worthless and probably only earns R4000 per month. I do not condone violence but I was very close to punching this guy in the face myself. – Jenna Jay Lange

Views on the incident were divided. While many felt that the man using the racial slurs got what he deserved, many also raised questions about the degree of force used against him.

“Its good to give someone a hiding if they call you a “k—ir”, but dont kick them on the head like that, because if they die, you are screwed,” wrote Thuto Moloi.

“A head kick like that could have killed the guy,” Devon Currer commented.

Matthew Johnstone said: “He got what was coming to him but only up to the point where he was grounded. The kick in the head was completely unnecessary especially given the fact that the threat was basically gone once on the floor.”

It seems many South Africans are okay with a little bit of violence but draw the line at a kick to the head.

Do you think the kick was justified? How would you have responded in a situation like this? Have you ever been involved in a race-related altercation, whether verbal or physical? Leave your comments below and we will round them up in a subsequent post.

* An earlier version of this story said that the altercation happened at Wembley Square. This has been corrected.