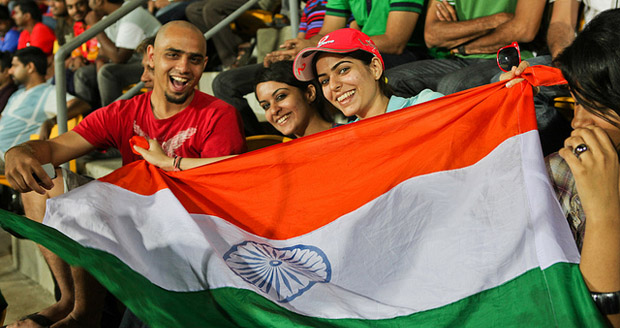 Cricket may be just a game, but on the subcontinent itâ€™s a religion for many. India, the defending cricket World Cup champions, will meet Pakistan in Adelaide on Sunday. For many fans, winning this match is even more important than winning the tournament itself. AIJAZ NAZIR found out from fans in New Delhi how they rate the Indian teamâ€™s chances. Tara Chand, roadside vendor, Rohini, New Delhi
Nothing is impossible. The Indian team is very strong and will win the match against Pakistan. I hope we will win the World Cup this time too. All the players are enthusiastic and they play very well. We have expectations of the team. In fact, the whole country has its eyes on them. They have to defeat Pakistan, anyhow. I wish whenever they play they should achieve victory. If India wins,Â we will have liquor and celebrate.Â Actually, we drink regularly. But that day (when India wins) will be special. Raaj Kumar, student, Saket, New Dehli
It is necessary that India wins this match against Pakistan, because it will make India famousÂ in the world. India will win the World Cup every time and it will make its ownÂ identity internationally. There will be celebrations with my friends. I will bunk school. I donâ€™t know about other friends, but I am planning to bunk school â€“ especially during India vs PakistanÂ matches. Ranjan Jha, government employee, Adrash Nagar, New Delhi
I canâ€™t specify any particular team [to win the World Cup], but I believe that the Indian team is our own and we should support it fully. Everyone wants India toÂ defeat not only Pakistan, but everyÂ opponent. It is just a game, but some people in India perform religious rituals [for good luck]. That is just because they want India to perform well. I am sure that India will win against Pakistan, but I want us to emerge victorious in the World Cup. That will be the real celebration. I have plans for hosting a grand party at home, if India wins this World Cup. SD Sharma, dentist, Green Park, New Delhi
It is not important to win each time you play. It is a game and anything can happen, but one needs to have patience and faith in God. I have an electronic goods showroom next to my clinic, where the crowd remainsÂ glued to the TV set which is kept outside â€“ especially during the World Cup â€“ to keep passers-by updated.Â The crowd erupts in celebration whenever India wins. Soma Dutta, journalist, Malviya Nagar, New Dehli
Yes, cricket is more than just a game for us crazy fans â€“ especially the World Cup. What adds spice is when itâ€™s an India-Pakistan game. People are very excited for this match. Being a typical Indian cricket-team supporter, on one hand, Iâ€™ll support India and I believe thatÂ India will give tough competition to Pakistan. On the other hand, I donâ€™t believe in performing religious rituals to ensure my teamâ€™s success. It is just a game whereÂ hard work matters. The IndianÂ teamÂ has proven its ability in recent years. I hope they wonâ€™t disappoint the faith of hardcore fans in the upcoming World Cup. I wish them luck! Beaj Nath, fruit seller, Pushpa Vihar, New Delhi
If India plays well,Â definitely we will be happy â€“ especiallyÂ when it is against Pakistan. I believe that there is nothing wrong in praying â€“ if someone is seeking help from God that is good. Before starting any work one should seek help from God and then only one should proceed ahead. I donâ€™t close my stall during the matches, but keep myself updated with the latest scores by watching the match in a nearby store. Also, if you donâ€™t play well, how can God come and make runs? They need to play as well. It is said that â€˜God helps those who help themselves.â€™ We will have aÂ grand celebration with friends only if India wins the match. Gazal Gupta, Communication manager, Pani Path, Haryana
People do observe fasts and many believe that this will make their team win but, I donâ€™t keep any. I am not a very hardcore fan of cricket but to watch an India-Pakistan match you donâ€™t need to be one. India vs Pakistan matches are something far beyond the sport and my money is always on team India, even though this time I am not happy with the selected team. Still, I hope for the best!

– Featured image: By Chubby Chandru, via Flikr.
– All other images: By Sameer Mushtaq.