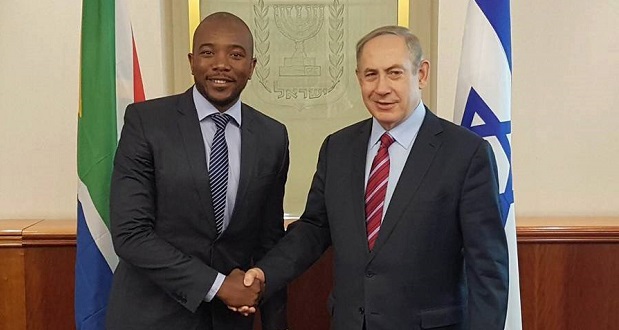 Excellent @IsraeliPM–@MmusiMaimane meeting yesterday in Jerusalem. So much for #Israel & SA to do together. Good to meet & exchange ideas. pic.twitter.com/ItqzOaXwFt

Fascinating to be in Israel and Palestine. 2 state solution is still what we must pursue. Listening, learning. pic.twitter.com/Ld9BKQtI8L

â€œThe people of Palestine continue to suffer in their rightful quest for self determination,â€ Zuma said. The ANC â€œpledges its ongoing solidarity and support for their just cause. We reiterate that we firmly discourage travel to Israel for causes not related to fostering peace in the regionâ€, he added.

Officially, the South African government supports a two-state solution. There are many parallels that have been drawn between South Africaâ€™s apartheid regime and the Israeli occupation of Palestinian territories, and ultimately South Africa supports the quest for Palestinian self-determination to live in peace, side-by-side with the state of Israel.

In December last year, Zuma pledged the ANCâ€™s support for the UN Security Council resolution 2334 against Israel and called for unity in Palestine.

Reverend Edwin Arrison, chairperson of the National Coalition for Palestine, told The Daily Vox that Maimaneâ€™s travel to Israel is reckless. â€œIt seems that even after the Security Council resolution and Israel’s extreme reaction to that, the DA leader does not understand how his presence seems to condone the Israeli settlement enterprise. For a party leader who so often relies on the law, it seems odd that he plays loose and fast with international law, particularly given our South African history,â€ he said.

Maimaneâ€™s visit also comes in the wake of Israelâ€™s ambassador Arthur Lenk speaking on a Department of International Relations and Co-operation radio station on Tuesday, promoting Israel. In the podcast, Lenk downplays the atrocities that take place in Palestine, and supports tourism and economic ties with Israel, calling it a haven for startups.

These weapons were used to threaten black South Africans and the special tear gas made by the trio was used on us daily.

The ANC has condemned the visit, saying it is “not surprised by the DA’s visit to Israel and to the Israeli Prime Minister Benjamin Netanyahu … it is a pity that the DA is endorsing the Israeli regime instead of condemning its violations of international law.”

“We also warn the DA not to mislead the public by suggesting that our government and our party share the same position as the DA on Palestine. The ANC not only supports a just a fair solution but we also have for for several years attended, actively supported and organised international solidarity campaigns with the people of Palestine. We, unlike the DA call out Israel for its racism against African refugees, we condemn Israel’s Apartheid policies and its violations of international law including building of illegal settlements and the inhumane Gaza siege,” the party said in a statement on Thursday.

UPDATE: The DA has since responded to the criticism that Maimane has received, saying that the trip is to both Israel and Palestinian territories “in order to listen and learn about the conflict first hand and to discuss how South Africa should be playing a more constructive role in bringing the parties together for peace”.

In a statementÂ on Thursday, the party said a meeting with the President of the Palestinian Authority, Mahmoud Abbas, was scheduled, but was cancelled by his office “due to a scheduling conflict”.

The party said it supports a two-state solution.