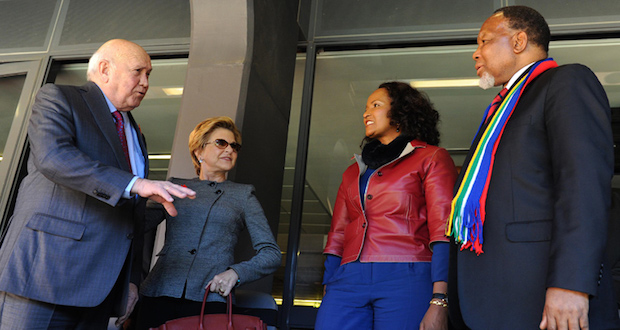 Welcome to the 2016 National slug match for the title of SAâ€™s Guardian of Whiteness. When the EFF decided to vote in favour of DA mayoral candidates, it defended the move by claiming the ANC was the party that truly protected white interests in SA, more so than even the DA.

But is this claim founded or was the EFF attempting to avoid admitting to political hypocrisy?

Can the DA roll with the punches and defend its title, or has the contending ANC finally got the DA on the ropes? Was it just an EFF sucker punch?

Hereâ€™s the blow by blow.

On the face of it, the DA has a long history of representing the white liberal vote. But shem, theyâ€™ve been trying, nÃ©? Their recent attempts at a political makeover have often been received as disingenuous though – black figureheads with a white electorate do not representation make.

Their contenders may be black, but they still appear to be coached by old white men.

As Muhammad Khalid Sayed, president of the Western Cape ANCYL, pointed out to the Daily Vox – the DA has come a long way, but it is still dominated by white men.

â€œThe leadership at the federal level may start to look a bit different now, but the leadership in terms of where it matters, in terms of service delivery, where the DA deploys people, is a totally different thing,â€ Sayed said.

Within Tshwane for example, Solly Msimangaâ€™s mayoral committee is 73% white and 20% black, despite black people representing 75% of Tshwane itself.

Sizwe Mpofu-Walsh, EFF supporter and PhD student at the Oxford University echoed Sayedâ€™s sentiments on the the DAâ€™s failures in representation, but warned that we should be cautious of placing representation above all else – especially when the alternative may be a corrupt ANC.

â€œIf you look at mayoral committees that theyâ€™ve decided to elect, their history and representation of parliamentarians, that matters. But it only matters to a point. If services arenâ€™t being delivered by either party, no matter the representation, then we have to ask ourselves what we want: a politics of aesthetics or a politics of delivery?â€ said Mpofu-Walsh.

Round two: whose interests do they serve?

Yusuf Cassim, DA Member of Parliament, felt the very premise of the question of which party is most invested in protecting white interests, is telling.

â€œIt quite mischievous, I mean itâ€™s a long-held propaganda tool for both the ANC and the EFF to say that the DA protects white capital and white interests â€“ which is quite strange if you look at how we govern,â€ Cassim told the Daily Vox.

Adding to the ANC beat-down, Mpofu-Walsh pointed out that if one looks at incidents of state terror on the poor, particularly black, working class, the ANC is in fact worse than the DA – especially when considering Marikana.

Sinoxolo Mbayi, a current member of UCT SRC, countered that there are no material differences between the ANC and the DA, besides the question of power.

â€œThe black government [ANC] is in power, and we have found that they are the vanguard to white capitalist interests. The white party [DA] that tokens black people is not in power, so they haven’t had a chance to push those interests yet, with the exception of the Western Cape and in some municipalities in Gauteng of course,â€ said Mbayi.

But the ANCYLâ€™s Sayed didnâ€™t throw in the towel. While openly admitting that the ANC is not perfect, he contended that if one considered the recent elections, the votes did not reflect that the ANC support base had sided with the DA – just that registered ANC members were unhappy with it.

â€œThey didnâ€™t give confidence to the DA, or decide that theyâ€™re going to vote for the DA. The support base of the DA is still not very strong in black communities because ideologically, and policy-wise, the DA does not represent the interests of the black majority,â€ said Sayed.

Yet in his final 2005 interview, Strini Moodley, Black Consciousness Movement co-founder and former Robben Island prisoner, spoke on Nelson Mandelaâ€™s imprisonment, release and figurehead role in the protection of white capital interest during the transition period from apartheid.

Mpofu-Walsh said that one is never sure what the ANC policy actually is. â€œThis is, in my view, more damning than the DAâ€™s more direct approach, because the ANC acts neoliberal but talks progressive, and so nobody knows where they stand; whereas the DA at least is transparent about where it stands and has relatively coherent, if deeply misguided, policies,â€ he said.

Sayed parried the blows, assuring that there was robust and strong internal debate within the ANC to determine the political direction the party was headed. It was not, unlike the DA, a foregone conclusion that the party was neoliberal and in the service of white monopoly interests.

â€œSo when government policy, which derives itself from the ANC policy, is going towards a neoliberal direction, there is a strong force also trying to pull it towards the left,â€ said Sayed.

Sayed also threw a counter at the EFF, saying that he found it ironic that whenever the ANC attempted to have the state play an increased role within the economy – a leftist move – bodies such as the EFF would be the first to make accusations of corruption and kleptocracy against the state.

Cassim argued that the DA was fundamentally in favour of creating jobs for the poor and promoting economic growth for budding entrepreneurs – not serving the ends of the economic elite, as the ANC was. He cited that the budget in the City of Cape Town was mostly geared towards to poor communities – though the extent of this claim has been disputed by AfricaCheck.

The judgesâ€™ verdict: in a game of lesser evils, can there really be a champion?

The DA seems to appeal largely to the white populace of South African. Judging by its current media campaigns, it is attempting to reform this, but the effect has not been seen among its membership and deployees within most communities. Its attempts at transformation thus come across as superficial – marketing tools that commodify â€œblacknessâ€. Along with this, the DA has an actual history of charges for racism among its councillors, members of parliament and broader membership.

The ANC meanwhile, still appeals to most South Africans – this is no doubt largely influenced its legacy as the liberation party. But in terms of its actions, policies and recent controversies, many are now very skepticalÂ of whether it truly serves the majority – some question whether it ever really did.

So maybe the EFF really did just throw a sucker punch by posing an impossible question. Or perhaps this is just a double knockoutâ€¦