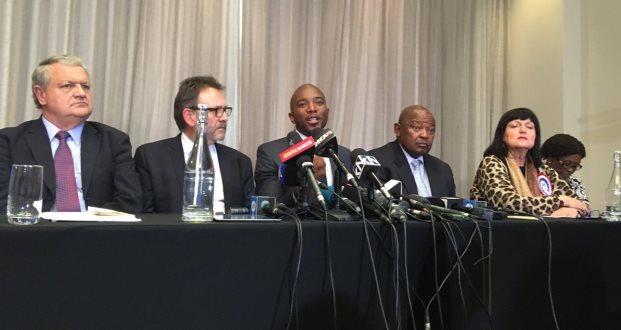 Roughly an hour after the EFF hosted a press conference in a field in Alexandra, the DA have set up in a swanky Sandton hotel to let South Africans know the results of their #CoalitionTalks. The symbolism’s pretty strong here, folks. These parties seem worlds apart.

We already know that the EFF refused to get into any coalitions with the DA, but as it considers the DA a “lesser evil” than the ANC, Malema has said that the EFF will support the DA in certain instances in Johannesburg, Tshwane and Nelson Mandela Bay.

Maimane formally announces the coalitions formed by the DA. All present plus agreements with IFP #CoalitionTalks pic.twitter.com/9N8dY4ta9R

Maimane is proud of the fact that these elections were the first time that the ANC has been reduced to less than 60%. He says that the people of Johannesburg have recognised the DA’s brand of good governance.

Onto the important stuff – Maimane confirms that the DA has entered into an arrangement to form governments with COPE, the ACDP, FF+, the UDM, and the IFP.

As for the EFF, Maimane admits that the EFF and DA were never going to agree on certain ideological issues. But democracy allows these different viewpoints to exist.

Representatives from the smaller parties all had a say before adding their signatures to the coalition agreement.

” The majority of the executive have failed to uphold the Constitution.” – Lekota #CoalitionTalks

Local government is where service delivery begins. Together we can do better than the ANC. – ACDP #CoalitionTalks

The UDM believes that service delivery is central to everyone. Uprooting the corruption is important. – UDM #CoalitionTalks

Speculation has been going around that the EFF’s “small condition” for its vote in the favour of the DA is that the DA removes Herman Mashaba as its mayoral candidate. So when asked about its mayoral candidates, Maimane confirmed that Solly Msimanga will be the mayor of Tshwane and Athol Trollip will be in charge of Nelson Mandela Bay. Maimane says that Herman Mashaba stands as their candidate for mayor of Johannesburg, and that’s what they told Malema when the issue was brought up in negotiations. He says it’s important to honour the relationship they have with voters.

He reiterates that the DA and the EFF do not have a coalition agreement, but they have negotiated with the EFF in good spirit and will welcome their vote.

But the UDM’s Bantu Holomisa has reminded people that talks have not yet concluded, the parties still have this weekend to come to agreements – “We are not here to play”, says Holomisa.