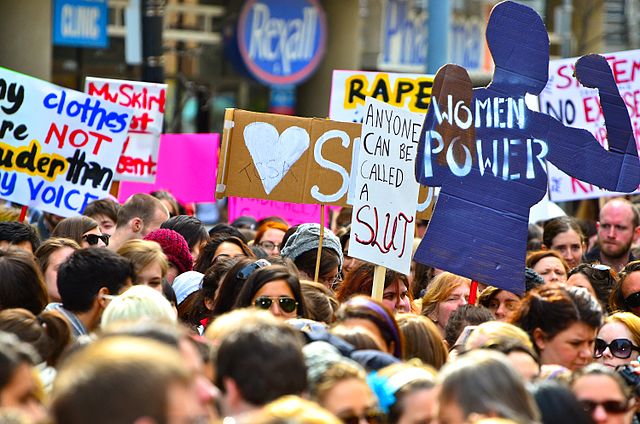 Some men are quick to speak out against racism, but perpetuate sexism and rape culture at every turn. PONTSHO PILANE is sick of it.

â€œComrades, there is no true social revolution without the liberation of women. May my eyes never see and my feet never take me to a society where half the people are held in silence. I hear the roar of womenâ€™s silence. I sense the rumble of their storm and feel the fury of their revolt.â€

This is a letter to black men â€“ the ones that have raised me, the ones I have loved and continue to love, and the one who, some day, I hope to spend the rest of my life with.

I am not sure if this letter is coming from a place of love or a place of being sick and tired of your patriarchal nonsense â€“ or both. But I feel it is important I write it. These thoughts, although written by me, are conversations that I keep having with myself and others.

How do you do it? You publicly declare that you are against whiteness and yet use its very premise to perpetuate sexism and patriarchy.

When patriarchy responds to #PatriarchyMustFall … Then I replace “men” with “black people” just to make a point. pic.twitter.com/2w5PPHoflU

How do you do it? You talk about the humanity of black people and leave those who are not black men out of it?

Is this really the freedom you consistently fight for?

Dear black man, why do you not take rape culture seriously?

I told you that I was almost kidnapped and possibly raped by three men. You told me that you wished you were the fourth and how great it would have been to rape me. Is that normal to you? Would you like it if a white person told you that they wished they were around in colonial times so that they can be your slave master? Would you take that as a compliment?

Dear black man, why does it take likening sexism to racism for you to â€œget itâ€? Is our humanity not enough? You have shown us it is not enough. That is why a comrade can rape another comrade in a revolutionary house like Azania and still be defended. That is why #MbokodoLead was created during #FeesMustFall.

Those of us who are not black men and donâ€™t perform gender through your narrow expectations are tired. We will not stand by and be raped, harassed, abused and have the life sucked out of us because you donâ€™t value our gender choices. Dear black man, when will this stop? When will you respect me for my humanity instead of my association with other men? Why do you respect my non-existent boyfriend and husband more than you respect my â€œNoâ€? When will I stop being someoneâ€™s someone and just be someone?

The other night I watched you leave your opened beer unattended at the bar. You walked around greeting familiar faces, unbothered. I donâ€™t remember the last time I left my drink unattended in public. I donâ€™t think I ever have.

Dear black man, do you not see my childhood? You saw a woman where there was girl, so you stared as I walked past in my school tunic. You used to say to me, â€œI am waiting for you,â€ your eyes lingered long enough for me to question the length of my tunic.

Dear black man, my womanhood cannot be sacrificed for my blackness, nor is it secondary to it. Walking down the streets of Braamfontein is a minefield because of you and your refusal to recognise my personhood. Nobody had to teach me about the lethal combination of melanin and a vagina, I have learnt it simply by existing.