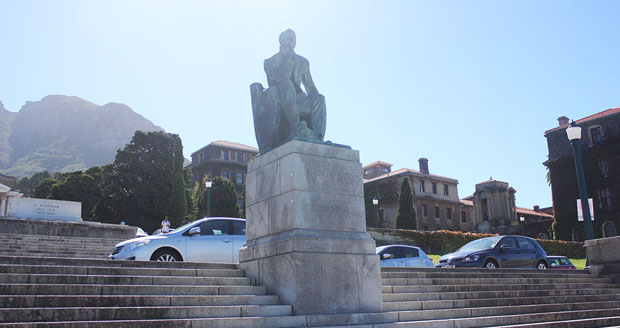 Five years ago I walked out in the middle of my South African political thought tutorial in absolute outrage after the whole class and the white tutor agreed that Cecil John Rhodes was a great leader. I did not understand how a whole class of sober-minded human beings could come to such a conclusion after studying what this man had written things like, “I prefer land to Niggers.” I was especially resentful of the one black male student who did not defend me while white students attacked me.

I have since stopped engaging with white South Africans about anything pertaining to my history, especially when it comes to them taking ownership of the fact that their forefathers were killers and thieves. Genocides like Herero genocide that wiped communities by colonisers are testament to my point above.

One has to look at the present impact of the Land Act of 1913 that forbid and confiscated land from indigenous people in order to prepare them for roles of servitude to white South Africa. The barbaric laws under Apartheid, like the Bantu Education Act, Group Areas Act, and Population Registrations Act are ugly historical events that resulted in decades of oppression of black people.

Besides, I have realised that my decolonisation comes from me taking ownership of my free self and not asking permission or validation from the white community.

If there is anything I can promise you, dear black person, it is that no matter how much you might scream and kick, white people don’t see you. Why don’t white people see you? Because we live in a world where to be black is a negation of what is considered human: whiteness.

We live in a world of white supremacist heterosexist patriarchy operates under capitalism google that term, because it is a thing. And it is powerful. It determines which bodies from which races, gender, sexuality, weight, size and ability get to be defined as human.

Every material and immaterial privilege that white South Africa enjoys today has centuries of blood dripping from it, which they cover with denial. To recognise you means that they understand that their very presence in this country is violence to the generations of African people who suffer intergenerational trauma inflicted from colonisation until now.

The racist response from white South Africa is not about the Rhodes Must Fall movement, but a reflection of white supremacy and white denialism. Many white apologists have come forward to “condemn” white racist, patriarchal, paternalistic, unoriginal responses to the Rhodes Must Fall movement. However, those very individuals are the consequence of white supremacy as a global system of arranging power.

White people exercise power over black bodies in this country all the time, and the ANC-led government is the gatekeeper of white supremacy. Frantz Fanon argues that African states needed to decolonise all colonial and oppressive structures inherited from the former colonisers and this included the psychology of the African, as well as the racialised capitalist system.

Steve Biko also predicted a black government that is capitalist will create a small black elite, thereby resulting in the rest of black people living in dire poverty. But during the negotiated settlement, the ANC proceeded to negotiate economic power away from the people while it adopted neo-liberal capitalist policies imposed by the international community. This has led to the consolidation of white economic power (with the exception of the black political elite) and has left the black people of this country destitute, especially the poor, working class, black woman.

Last year we protested against Tim Osrin, a man who defended his right to beat up a black woman who happened to be walking down the street using the justification that he thought she was a prostitute. At the time of these protests, the courts saw at least 10 cases where white males had beaten up, run down with a car or sjamboked a black person. Osrin and others are a reminder that white racist patriarchy exercises power and mitigates violence over black bodies and the ANC does nothing about it.

Locating the legacy of Rhodes, therefore, must happen within the context of contemporary apartheid South Africa and how the ANC fucked black people over when it did not take back Azania and our land. If the ANC had not sold out during the negotiated settlement by excluding other political parties and leaving the economy in the hands of white capitalists, we would never be having this conversation about institutional and structural racism in education, the economy, language hierarchies and the healing of memories. Colonial symbolism like Rhodes would not be traumatising our psyche 21 years after apartheid supposedly fell because all that would have been destroyed in 1994. Democracy remains a farce.

Even now, the ANC leaders are quiet because they know that outside Parliament, Rhodes and Smuts still stand as the reminder that this country is not free. Black people experience structural violence under black leadership for the protection of a rainbow nation lie. And people who express this lie in the form of protest like Andries Tatane and the Marikana miners are killed in cold blood.

The Rhodes Must Fall movement has been gaining strength in other provinces because we, as the young people, are tired of white structural violence and the arrogance of the ANC. This is a cry that young people are hearing all over the country and the lack of transformation in higher education is indicative of how untransformed South Africa remains.

May the Rhodes Must Fall movement grow into a politically unaffiliated, youth revolutionary group that takes down apartheid for real this time. White racism must go, patriarchy must go, heteronormativity must go and Rhodes must fall.

Wanelisa Xaba is a founding member of South African Young Feminist Activists. She is an imperfect daughter, friend and mother, a postgraduate student at UCT, a poet and an aspiring writer. She lives in a ghetto outside the white colony of Cape Town.