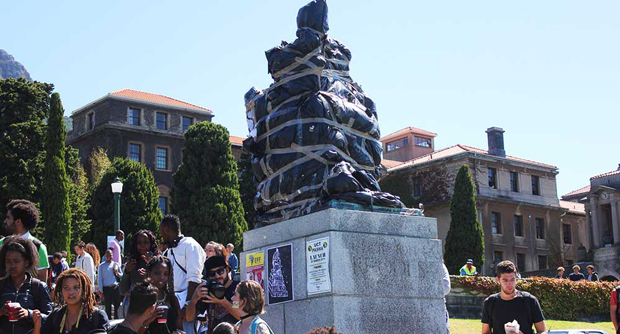 We need to update our copyright laws to allow poor students fair use rights of textbooks, which remain prohibitively expensive for most, writes THABISO BHENGU.

The South African economy is in shambles and the majority of the population does not have enough wealth to shield themselves from the effects of this economic decline. Â Even when the economy is thriving, people on the ground never get to see a material difference in their lives.

According to Oxfam, two families have the same wealth as the bottom half of the population and therefore economic cycles are constantly states of looting from the poor.

Labour productivity in South Africa is not a story of lazy people who are not interested in changing this country. The reality is the majority of our people are uneducated. The legacy of Bantu Apartheid education still lingers in the classroom and barriers to accessing quality education mean that class factors still determine how far you go in life? Children of poor people need to be exceptional to be granted bursaries, financial aid, loans etc to access higher education.

Students across different universities gave testimonials at the Siyaphumelela Conference this year on food insecurity in universities. Students are understandably facing a lot of social and economic pressures.

The current South African university system gives birth to different kinds of hungers. A hunger for a decolonised institution, a hunger for safety for LGBTI and gender non- conforming people, a hunger for breath for many black women who often get harassed by men on campus. Many students have a hunger to learn and change their lives and thus consequently the trajectory of the country, but books are unaffordable. Universities in South Africa have no shame in asking poor students to buy three books costing R700 each to be used for a semester. Many students find themselves having to share books to study.

Laura Czerniewicz’s paper on Student Practices in Copyright Culture: Accessing Learning Resources exposes this economically harmful practice that students are forced by circumstances to do.

Wandile Dlamini, a UCT student and activist, reminded a room full of librarians and copyright scholars at a recent Wikimania conference, about the exclusionary prices of books and how that determines who graduates and who doesn’t.

Fees Must Fall as a movement exposed how students are often incapacitated to become active thinkers and producers of knowledge in institutions of higher learning because they are battling to survive. These are the very same students we hope are going to come out with innovative solutions to accumulating political, cultural, spiritual and economic problems.

The education crisis needs us to think outside of the box because pouring money into the hands of administrators alone is not the solution. For instance, our copyright law hasn’t changed for four decades. A group of filmmakers, students, academics and artists under the name ReCreate have been advocating for our lawmakers to adopt a more flexible and accessible copyright system generally referred to as fair use.

Fair use allows general exceptions to copyright. It is a law that allows a person to use any copyrighted work for as long as the use is fair to the rights holder. Currently, our law was not written with the digital future in mind and thus simple mundane activities like sharing a picture over the internet may be illegal. The current law has few listed exceptions, but scholars and activists argue that they are not enough and further limit a legal space for technological growth.

5 Cheap Ways To Get Books

Fair use is not a free-for-all. Fair use wouldn’t allow students to copy the entire textbook, but it would allow them to photocopy a small section of the textbook. This is because fair use doesn’t allow users of copyrighted material to deprive copyright holders the right to derive an income from their work by substituting for their work in the market. Fair use would cater for the digital world where students can share sections of books over email, Whatsapp and university e-portals etc, as they are currently forced to.

Wits University librarian Denise Nicholson, argues that, “we pay a huge amount every year for subscriptions, whether they’re print or electronic, and then we use those same material to put into a course pack or scan onto an e-platform which is password protected. Then we have to pay again, because we’ve taken the same article off that database and put it in a different format. We pay huge amounts to rights organisations for the same materials we paid for. And every year we have to do this, we pay a huge subscription base for their electronic resources and then we pay another amount which goes to photocopying because we’ve made copies of those copies. So, it’s costing the universities a huge amount, and that money could be used for better resources. We need more flexibility in the law to use those materials without having to keep paying over and over for the same material”.

Fair use would broaden access to information and knowledge in higher learning institutions. Students would be able to get access to historical knowledge from orphan works that they cannot use right now. Orphan works could be posters, essays, poems etc from the apartheid era where people did not write their names and thus the copyright owner is unknown. It also includes books and other materials where copyright is ambiguous, and or where parties are dead or unknown. This is important during this time where we are grappling with decolonising universities as a philosophical and economic project for our future. Good quality education needs to mean open access to knowledge and fair use ensures that. It has been successful in the US, Singapore, Philippines etc and it is time for South Africa to follow. Turning this economy around is going to need students that are well informed and aren’t hindered by their socio-economic backgrounds. Fair use alone is not the magic trick, but it certainly holds key to unlocking doors of access to education and learning materials for many.

Thabiso Bhengu is Director of Content at Black Stripe Foundation.