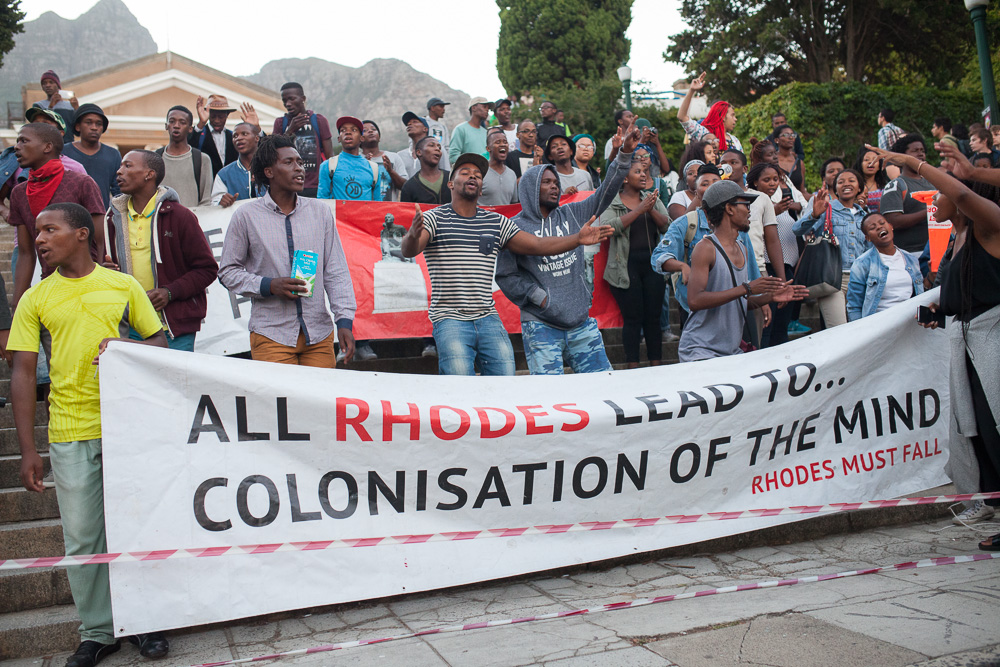 Calls for decolonised higher education in South Africa are calls for our next revolution, one that was instigated by Rhodes Must Fall movement. The targeting of Cecil John Rhodesâ€™ statue at at the University of Cape Town (UCT) was a symbolic attack, aimed at the normalised symbols of colonialist rule in South Africa, an era so deeply entrenched in our society that we are still living through its effects. The Decolonising Institutions of Higher Learning Dialogue hosted by Rethink Africa, a pan-African social enterprise focused on development, and facilitated by Wits Fees Must Fall student leader Busisiwe Seabe, aimed to take this conversation forward.

I believe that we are up to the task of decolonising higher education institutions. The energy and passion I felt at the dialogue on that cold Thursday evening at Wits University was powerful. The room was filled with young black students who are tired of being forced to live in what Naledi Chirwa, EFF Student Command leader who was one of the speakers, called â€œexaggerated spaces of white academiaâ€. But as one of the other speakers, UCT Department of Political Studies lecturer Dr Lwazi Lushaba asked, are we aware of the scope of the task ahead?

In order to truly decolonise higher education, black South Africans first need to acknowledge their position in these spaces. Chirwa urged us to come to terms with the fact that, as black people, we donâ€™t know how to truly exist because weâ€™ve never seen ourselves truly existing. â€œThere is no â€˜Iâ€™,â€ she said, adding that our true identity has been stripped away by colonialism, â€œand we have to not be scared of that reality because that is when you can actually confront these things.â€

Lushaba stunned the room when he said that if white people were to give in and give black people the universities, we wouldnâ€™t know what to do with them. â€œWe will have to run after them and say we are sorry. â€˜Please come backâ€™.â€ He said this because the very nature of higher education is colonialist – it comes from a Eurocentric ideology of knowledge and understanding of education. We donâ€™t know what a decolonised education looks like or how to teach it. The task at hand is much larger than just getting more black academics. â€œIt does not mean that when we have more black academics in UCT, it is decolonised. To be black does not necessarily infuse you with the knowledge of decolonised education.â€

Itâ€™s about changing our understanding of education and the subjects we are taught. Masixole
Mlandu, a fallist from UCT, said that education has always meant more that just education. â€œEducation for us as black people has never been neutral.â€ Just take a look at Bantu Education, a weapon the apartheid government had fashioned to use against black people. It was merely for creating adequately educated workers, not successful people. Now, tertiary education is seen as a way out of the vicious cycle of poverty. The subjects that we are taught at higher education institutions, Lushaba pointed out, are a recent creation of a Eurocentric and colonialist origin designed to make capitalism function. They all began in the 16th century when Europe became a modern industrialist society. â€œThere is nothing universal about Western knowledge. It had a need to appear universal.â€

But for a truly decolonised higher education and the spaces that it takes place in, we need to decolonise our modes of thinking, which Chirwa rightly points out are racist, patriarchal, and heteronormative. â€œYou talk about decolonisation, knowing very well that we think of race because of racism and we think in gender because of patriarchy, we think of binary because of heteronormativity. Not because of anything else. Thatâ€™s why we want to decolonise.â€ Mlandu asked how we should move from Eurocentric gender roles, that define people as women and men. Black radical feminism is a tool for decolonising gender identities, and I am here for it. In my mother tongue, there exist no gendered personal pronouns.

Essentially, rooting out and changing the power dynamics of colonialism is going to be a long, painful process that needs to dig deep into our systems because, Mlandu said, â€œ[We] canâ€™t get decolonised education in a colonised society.â€