In conditions of dreadful poverty, the possible contractionÂ of AIDS-related illness may seem less important than the immediate need for money, leading some people to be sex workers under unsafe circumstances. But also, choice. Adult women – and men – are free to do what they want their bodies. It’s work after all.

It is however, risky work.

A recent survey of South African sex workers found that about one in five women had been sexually assaulted in the last year.

Sex workers are often exposed to rape and other forms of sexual violence, including by police officers. They are regularly in a subordinate position relative to their clients because of the inequality in gender, income, or social class, which can make it tough for them to negotiate condom use.

[dropcap]”[/dropcap]I have been raped three times but now I cannot report these because what I am doing is illegal. Rape is unexplainably traumatic. No matter how many times it can happen to you, it will be as traumatic as the first time. While it happens, youâ€™re also thinking of the possibility of this person killing you afterwards. The first time the man just refused to pay after the service had been granted to him, to me that was rape and I learnt a lesson to always ask for the money first. My second time I was held at gunpoint and third time at knifepoint. I am still shaken about these incidents. Whatâ€™s worse is not knowing when it will happen next. But I have no choice but to work, I have to pay bills and feed myself and the family.“

Sex work is a crime in South Africa, making it nearly impossible for sex workers to report an assault or rape, without incriminating themselves.

Some police officers confiscate condoms from people they believe are sex workers. The police may also treat the fact that a person is carrying condoms as â€œevidenceâ€ that he or she is a sex worker and arrest him or her. This discourages sex workers from carrying condoms, which increases the chances of unprotected sex and potentially becoming infected with HIV.

South Africa was the first country in Africa to approve the use of Truvada, a form of HIV prevention, which is known as pre-exposure prophylaxis (PrEP).Â PrEP can reduce a personâ€™s risk of contracting HIV by about 90 percent and is reported to be particularly useful to people who are at a higher risk of contracting HIV – The World Health Organisation has identified these people as: men who have sex with men, young womenÂ (15- to 24-year-olds) and sex workers.

Sex workers however face judgement and negative attitudes from health service providers, which can make it difficult to gain access to condoms and HIV screening. It can also make it difficult to obtain treatment for other STIs, which can result in increased susceptibility to HIV infection.Â Sex workers who are HIV positive also face barriers to obtaining and adhering to treatment.

The Department of Health survey found that whileÂ about 75 percent of women reported using a condom with their last client, less than a third of women living with HIV reported being on antiretroviral treatment.

The answer lies in decriminalising work. It’s simple, effective, and it will save lives. 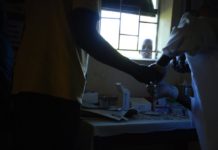