Home As Told to “We are deeply worried about a trend to undermine the ability of...
WhatsApp
Facebook
Twitter
Email
Print 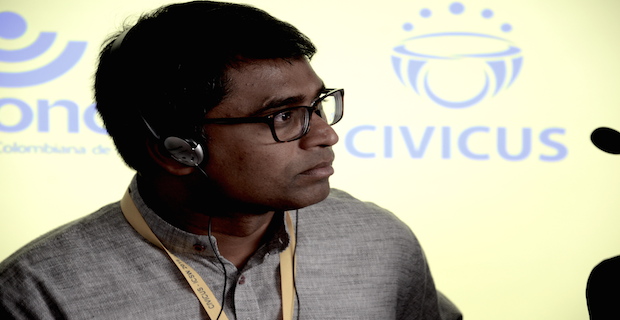 This week, some 900 civil society activists and thinkers have descended upon Bogota to discuss the role of civil society in making a better tomorrow. CIVICUS Secretary General DHANANJAYAN SRISKANDARAJAH explains why the summit comes at such a crucial time.

We are deeply worried about a global trend to undermine the ability of citizens to organise and mobilise. Our colleagues just published research that says that in 101 countries around the world: one or more civic freedoms – the freedom of association, the freedom of assembly, freedom of expression – are under threat. That in 101 countries in 2015 one or more of these civic freedoms was under threat.

And this is unacceptable. We live in a century were we are told that democracy has won, we believe in human rights. Our governments have signed documents guaranteeing these and other freedoms, yet weâ€™re in a world where the number of countries weâ€™re worried about are going up, not down.

In 2014, that list was 96 countries. So my colleagues and I come together in an environment in which we are deeply worried about these fundamental freedoms and what governments and others are doing to undermine our ability.

The second aspect of this week thatâ€™s interesting to me is that in many parts of the world we have won the struggle for democracy on paper. We have created institutions, parliaments, elected assemblies, judiciaries that look for all intents and purposes like theyâ€™re functioning democracies, but we also live in a time where the most critical aspect of that democracy the ability of citizens to express ourselves to come together, to take action, to speak out is being undermined. I think we need to come together and work out how in the 21st century we can make democracy work in a more meaningful way for more people.

That there are groups and populations that are denied their right to participate, who do not have to ability to decide for themselves what happens in a country. We need to come up with ways to designing everyday democracy that is inclusive of everyone in a society. And for us, the role of civil society is to push for that strength and to make it concrete in ways the Tunisian National Dialogue Quartet showed us so wonderfully in Tunisia. That, we want to see in many, many other countries in the world.

In Latin America, we think thereâ€™s also a post-ideological moment where some of those ideologies are no longer as relevant to shaping our societies and yet we see new trends that are worrying, if not more. We read where big businesses have political interests and are colluding to capture extractive industries, capture resources, and thereâ€™s corruption in countries and systemised marginalisation of some voices.

And we believe itâ€™s time for civil society to be allowed to play its rightful role in creating these more just societies. And finally, on peace in Colombia, we are encouraged and delighted to see the progress that has been made in this country and the height of the negotiated settlement. But one of the reasons weâ€™re here in this country and weâ€™re excited is to recognise the wonderful role that civil society has played in getting Colombia where it is today and the role it needs to play in sustaining peace.

And the paper that any settlement written on will not be worth the effort if we do not empower citizens all over the world, including Colombia, to create more peaceful societies, to build trust in their own communities, to strengthen the bonds that bring people together rather than divide them. We are convinced civil society as has been shown in Colombia to be at the heart of that project of building sustainable peace.