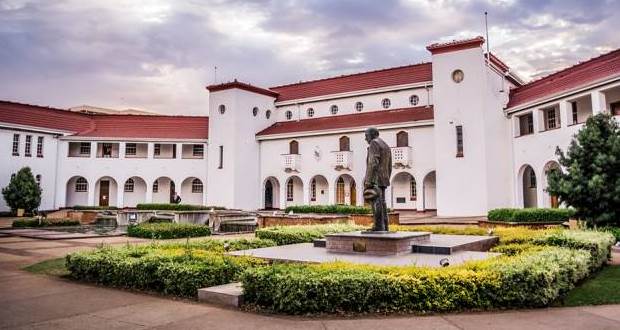 While 80s movie fans from across the world observed Back to the Future Day on the day 21st of October, a small group of people was alerted to the presence of a time machine situated at NWU Potchefstroom (PUK) campus.

It seems that the machine has been ferrying attitudes and ideas from the depths of our apartheid past to the 21st century. Although this news might come across as a nutty conspiracy theory, it is a more plausible explanation for what has recently occurred at the PUK than believing students and management honestly thought some of their ideas were suitable for 2015.

For instance, while students around the country protested against fee hikes which make tertiary education exclusionary, at the PUK mostly white Afrikaans students chose to surround the statue of a racist in order to “protect” it from Reform PUK, a small group of mostly black students.

Among other requests, Reform PUK have called for the statue, which stands at arguably the most prominent point on campus, to be removed.

The statue depicts the Afrikaans writer, poet and academic Jakob Daniel du Toit, known as Totius. Although he translated large parts of the bible into Afrikaans, he was also a racist. To be more precise, he was a racist who used a perverted interpretation of bible verses to justify segregation.

â€œTotius designed some of the earliest biblical proofs (for apartheid); for example he used the story of the Tower of Babel to illustrate that God had willed the separation of distinct nations,â€ according to a paper written by Elizabeth Corrado from the University of Illinois.

Perhaps it would be possible to dismiss the statue saga as an outlier, a collective brain fart and not as a result of a time machine, or, alternatively a culture of non-inclusive thinking. But as last week wore on, the deeply conservative attitudes that prevail around Potchefstroom seemed to become more prominent.

Unlike Wits and many other universities where Student Representative Councils (SRCs) marched in support of students calling for fees to fall, the PUK SRC did not march. In fact, they issued no statement of support until after President Jacob Zuma announced that there would be no fee increase.

Instead, only a small number of mostly black students held peaceful #marches and disrupted traffic during the week.

However, the peaceful protest action at Potchefstroom and the mostly peaceful protests nationwide seems to have had a serious enough effect on management for them to have gone back to their machine in order to find another tactic from the 1980s, namely restriction of movement.

On Friday the 23rd of October, PUKâ€™s management decided to close down campus for security reasons, claiming that is was protecting students even though the previous dayâ€™s protests had seen no violence in Potchefstroom.

Closing down academic buildings may have been welcomed as a part of #NationalShutDown, but in a sinister twist of events, the university effectively quarantined thousands of students who stay on campus by stopping them from being able to come and go as they please.

The policy, according to students that I have spoken to, was that campus residents were allowed to leave campus to go shopping or to join the small peaceful protest that took place outside, but security would not let you back into campus when you wished to return to your residence. Only once the peaceful protest had stopped was anyone allowed back onto campus.

Even after Zuma announced concessions to the #feesmustfall movement, certain Pukke still managed to utter attitudes that should have died in the 1980s. Netwerk24 reported on Sunday that certain PUK students were angry that exams had been postponed by a week because it interfered with their planned vacations and, despite the fact that students nationwide are no longer going to experience an increase in fees, the effect of the protests were highly inconvenient for their schedules.

I have always thought that if humanity builds a time travel machine, we could do great things with it, like prevent genocide and bring back the dodo, but it seems as if, in the hands of those in positions of power at NWU PUK, it has only brought back some of the worst aspects of the 80s.

If there is no time machine and rather that the PUK merely has an oversupply of people whose attitudes are reminiscent of our bitter past, then serious intervention and introspection is needed. But surely a collection of so many people with such harmful attitudes is not possible in 2015.

No, it must be a time machine.

The PUK time machine must fall.

When not hustling as a wine salesperson or being a farm boy, Leigh Schaller writes about pigeon racing and economics. He survived an education at NWU Potchefstroom and Stellenbosch University thanks to a blend of oven baked chips and coffee.