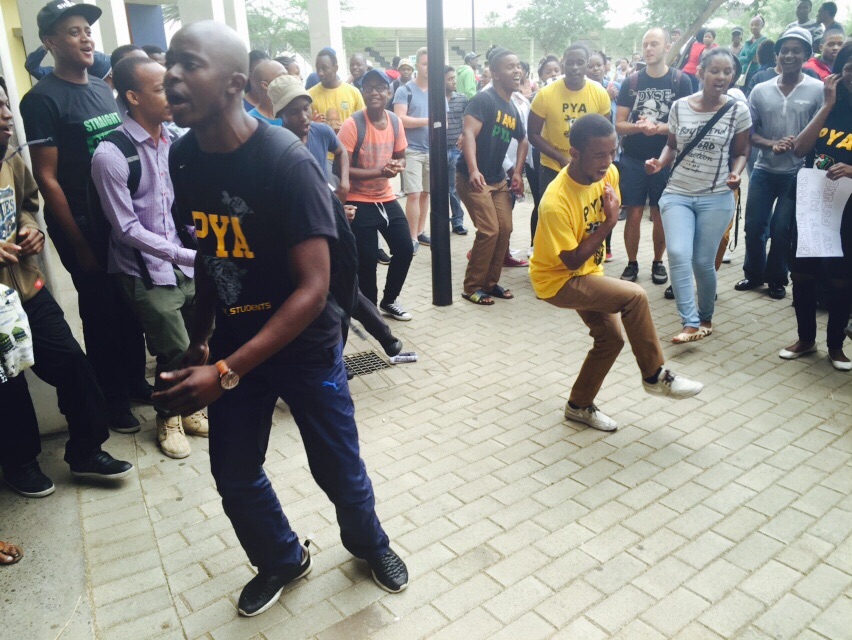 Fridayâ€™s announcement by President Jacob Zuma of a 0% fee increase for 2016 is less a case of #FeesHaveFallen, and more of a case of the revolution landing in a hot mess. THE DAILY VOX TEAM explains.

Wits University and the Student Representative Council (SRC) have agreed that students will go back to class on Wednesday but there are students who feel that they have not achieved the aims of the protest. One of the main demands, from the beginning of the Wits protest, was to end outsourcing. Students spent most of the weekend in meetings deliberating whether to continue protests to achieve the goal of ending outsourcing and free education or to resume academic activities and focus on exam preparation.

What we now know for sure is that while it sure gave us the feels to see ANC- and EFF-aligned students standing together for a common cause, internal tensions had been brewing for days. In the early hours of Monday morning, the gloves came off.

Ripped pages from SRC president Shaeera Kallaâ€™s notebook mention an amount of R40 000. According to dissenters, this was a bribe from the African National Congress (ANC) to the ANC-aligned Progressive Youth Alliance (PYA), to bring the protest to a halt.

According to the PYA, the amount in question refers to funds that Wits ANCYL representative Yamkela Fanisi said in an unofficial meeting that he could try to obtain from the ANC in order to pay for food, as hundreds of students have been relying on sponsored breakfast, lunch and supper throughout the protest due to dining halls not being in operation. The PYA says all money that was received in donations was received through the bank accounts of Wits academics, as Wits was not allowing the SRC account to be operational.

Professor Joel Quirk confirmed to the Daily Vox that his private bank account was used to receive funds for the protesters, specifically to purchase food and drink. He denies however that any money was received from political parties. â€œWe circulated a specific injunction against accepting funds from any political parties,â€ he said. â€œWe wanted to remain non-partisan.â€

2. PYA held a secret meeting with the ANC

The moment when non-PYA students disrupted a private PYA meeting on Sunday night is this morning being referred to as #ANCCapture. The people present at this meeting included the current and incoming SRC presidents, Shaeera Kalla and Nompendulo Mkatshwa, incoming SRC member Lesego Mokwena, Yamkela Fanisi who is the ANCYL Wits Chair, Benedict Ntlai who is secretary of YCL Wits, SASCO treasurer general General Banda, SASCO national president Ntuthuko Manthombothi, PYA member Thuthukile Zuma and others. Kalla said on video that the purpose of the meeting was to talk about why Wits had refused to meet with Zuma on Friday at the Union Buildings.

Similarly, other PYA members say the meeting was an organisational meeting involving members of the national PYA and the Wits branch to resolve internal organisational disputes.

Let’s be clear: nobody denies that a meeting was held. But remember, there’s a difference between a secret meeting and a closed meeting.

The meeting was a closed meeting of the PYA. There. Is. Nothing. Wrong. With. That.

However, non-PYA aligned students, allege that the meeting was proof that the ANC had conspired with its affiliates in the PYA at Wits to abandon the protest.

3. The ANC running political interference in the protest

There have been several accusations of interference by the ANC in the Wits student protest. In a voice recording that was anonymously sent to The Daily Vox, one student says that the PYA meeting was proof that the movement had been infiltrated by the upper echelons of the ANC. Letâ€™s not forget that the ANC, after initially ignoring the protest, has now hailed the PYA for providing leadership in a protest that was aligned with the ANCâ€™s values. But the PYA – which is an affiliation between the ANCYL, Young Communist League (YCL), Muslim Student Association (MSA) and SASCO – is, above all, an ANC-aligned organisation. Analyses that hail the protest as a deligimitisation of the ANC tend to miss this fact.

As political analyst Ebrahim Fakir says, â€œMany of the PYA leaders, leaders of this protest, are aligned in one or other way with the ANC. So this protest has been quite particular, quite specific in its demands but once it goes beyond this, once it become about other issues,it will splinter. The PYA will continue in this vein to be perceived as anti-ANC when it comes to issues like fees, admissions, transformation and the like but broaden it beyond those issues and the PYA is unlikely to budge because they are already aligned with the ANC.â€

It must however still be noted that while the majority of the PYA-aligned SRC were pushing for the university to reopen, Kalla, the current SRC president, was still pushing for the protests to continue. On this, even EFF-aligned students agree.

Shaeera wanted it to continue. But her voice was suppressed. I just want to clear her name & then stay out of this. http://t.co/Rh902e64QD

4. The ANC engineered the protest to make JZ look good

7. The script for #FeesMustFall was for students to protest on fee increases & the Pres to ‘save’ the day like he did on Friday #ANCCapture

As far as conspiracy theories go, this one is a mind warp. It is however the most damning of all the accusations levelled against the PYA. According to some students at Wits, the entire protest had been orchestrated from the beginning by the bigwigs at Luthuli House to make President Zuma look like the good guy.

PYA member and former Wits SRC president Shafee Verachia told The Daily Vox that claims that the protest was an ANC plot from the beginning were a gross fabrication. â€œItâ€™s ridiculous. If you look at the mobilisation for the protest, none of these people were there, doing door-to-door at residences or gaining support when we needed it.â€

And while the SRC statement Â commits to further action on the long term goals of free education and ending the outsourcing of labour on campus, the fact that governmentâ€™s commitment to no-fee increases has been hailed a victory by the SRC shows that, for the PYA at least, this was never about challenging the legitimacy of the government. If anything, it was about young people within the ANC struggling to have their voice heard, and requiring the support of their political foes to lobby for change.