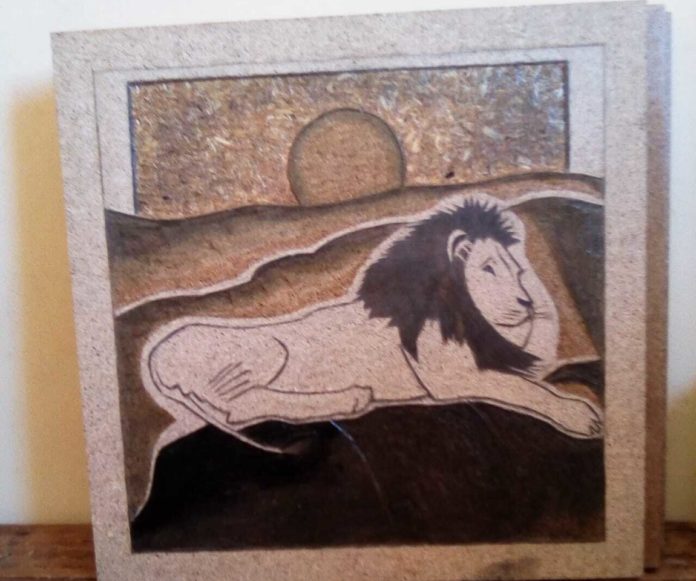 Nolan Vries is an artist from Steinkopf in the Northern Cape. He was in a car accident in 2005 and became a paraplegic as a result. The accident served as the impetus for him to tap into his creativity and start creating multi-dimensional art. Vries works with wood and acrylic paints. He shared his story with The Daily Vox.

In 2005, Vries was on his way from work and was in a car accident. He became a paraplegic from the accident and had to begin using a wheelchair.  He spent six months in hospital to rehabilitate. Vries said that after the accident, his faith was tested. However with the support of his family and friends, they helped him to keep believing in his abilities.

After the accident, Vries turned to art as an outlet. He started using wood and acrylic paint as his main mediums.

Vries crafts imagery on wood with a hammer and screwdriver. In the last 6 months, he has been introducing colour into his work. After the crafting, he finishes it off with paint and varnish. Vries is self-taught and said his dreams about art made it possible for him to start creating. While access to wheelchair accessible spaces is a problem in his hometown, he has assistance to ensure he can keep pursuing his art.

It is for this reason that Vries believes everyone should have access to art and culture regardless of whether they are differently abled or not.

Vries is influenced by his immediate surroundings. He takes note of the flora and fauna he sees in his daily life. “I am fascinated by the animal life here in the Northern Cape and the indigenous peoples like the KhoiKhoi,” said Vries. Vries said the influence of indigenous people and tribes are very prominent in the province. His work is a celebration of his surroundings.

“This is the Nama Khoi and the Kalahari lands. There is so much beauty to be inspired by here,”  he said.

Lack of Support for artists

“There is no real institutional support for artists here. We are self-reliant and create our own support systems. We do our own marketing and use social media to do so,” he said. Vries said the lack of government support should change. He said artists like Granville Cloete, a visual artist, do not get the recognition they deserve. He said Cloete is one of the best artists in the Namakwaland District.

“We don’t have showcases. It’s not just about the money. It’s about visibility. They don’t want to come out to small towns and seek us out. They go to a bigger town like Springbok but don’t really venture out to us,” said Vries.

Vries plans to expand on the woodwork by doing sculptures of wildlife and other animal life. He also wants to bring artists from all over the Northern Cape together to organise a showcase. Vries wants to show the talent and creativity that exists in his province.

“I want my daughter Taylor to be proud of me. I want her to look back and speak about me as someone who created art and beauty.I want her to be able to tell people I never gave up after the accident, ” said Vries.

“My art is my therapy and medication. I have had to adjust so much since the accident. It keeps me going and my purpose is to keep being an artist,” Vries said.

Vries can be contacted via his Facebook page for commissions.  He hopes to have the capacity to start shipping his work soon. For now it is only available in the Northern Cape.