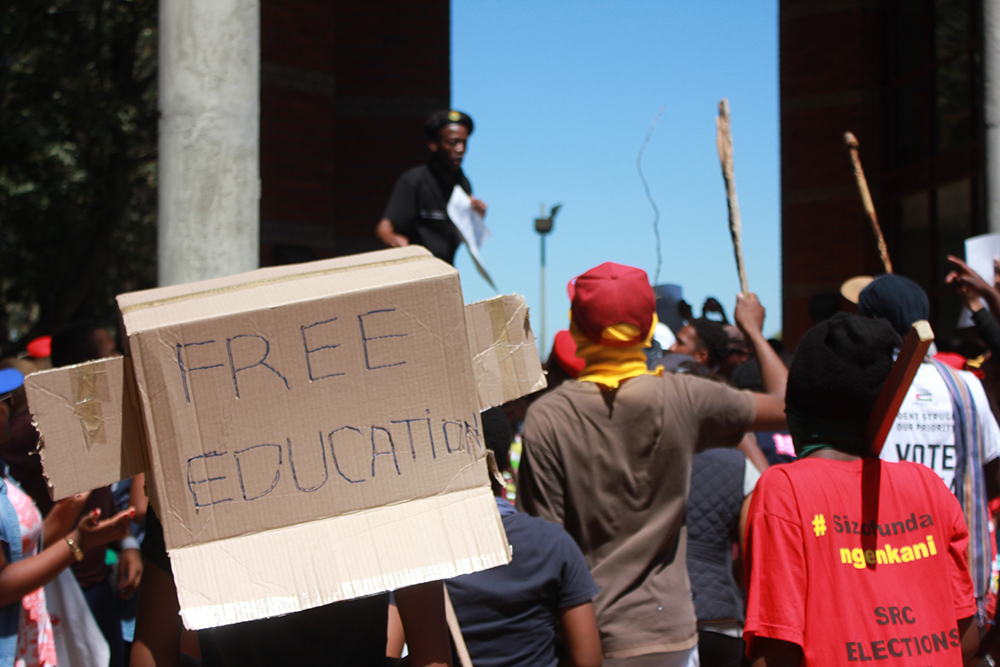 The Fees Must Fall movement emerged in 2015 through university students who felt that higher education was an inalienable right no one should pay for. Over the course of two years, students across the country shut down higher education institutions and forced the government to consider fee-free education.

In the early days of the Fees Commission, student groups testified before the commission and laid out what the Fees Must Fall movement wanted and gave their own recommendations into how fee-free higher education for everyone could be accomplished.

A year and 11 months later, President Jacob Zuma finally made the report public.

The most standout and progressive recommendation the commission makes is the scrapping of application and registration fees. The South African Students Congress (Sasco) and the Young Communist League of South Africa (YCLSA) presented this demand to the commission. â€œ[A]pplication and registration fees limits access to financially needy students,â€ read the report. Sizwe Mpofu-Walsh, author and activist, called them â€œlittle speckles of hopeâ€, along with the recommendation that tuition at TVET colleges should be free.

As for the rest of the commissionâ€™s report, Mpofu-Walsh found it â€œhugely disappointing but not surprising”. The recommendation to switch to an income contingent loan system (ICL) for all higher education institutions flies in the face of studentsâ€™ calls for a decommodified and free higher education. What this system does is give the private sector control of funding university students, said Mpofu-Walsh. â€œ[It] actually may be worse than the current system to the extent that we hand the whole thing over to the banking sector,â€ he said.

The same sentiment was shared by former financial accounting lecturer at Wits, Khaya Sithole. He proposed an alternative education funding model to the commission. â€œWhat these guys propose is that we must make this an open-ended loan system, so that anybody, no matter how rich or poor, will be able to participate in this loan system,â€ he told The Daily Vox.

Patrick Bond, a professor of political economy at Wits and contributor to Fees Must Fall Student Revolt: Decolonisation and Governance in South Africa told The Daily Vox that heâ€™s â€œquite disgusted, but not surprised,â€ by the commissionâ€™s recommendations. â€œThey [studentsâ€™ demands] were considered but only the most conservative ideas were given any kind of potential endorsement,â€ he said.

Bond also wasnâ€™t happy with who they chose to head the commission. â€œIt was a commission set up with another boring old white judge who cannot think outside the box,â€ he said of the commission chairperson retired judge Jonathan Heher. Because the commission was headed by someone with â€œclass and race biasâ€, who is a â€œservant of corporate interests,â€ said Bond.

And because of the corporate interests the head of the commission was protecting, it didnâ€™t adequately consider the role corporate South Africa plays in providing free higher education to all South Africans. â€œThe ideas of wealth taxes and corporate taxes were not properly looked at,â€ said Bond. The report considers increasing corporate tax to 30%, which Bond thinks is short-change. He said he doesnâ€™t see why corporate tax should be raised to the 1994 era levels of 56%.

Heher also didnâ€™t make any recommendations into tapping into the liquidity of corporations in South Africa. â€œThe wealth model and the huge liquidity that we have in corporate coffers hold over R1.4 trillion of liquid cash that theyâ€™re not investing,â€ Bond said.

Bond also noted that the commission didnâ€™t consider governmentâ€™s â€œwhite elephantâ€ mega-infrastructure projects that cost billions of rands as a revenue source. He said money could be used from those projects to fund free higher education. â€œThese are the kind of big money items that Heher would not consider, much less mention, because heâ€™s such a servant of corporate interests.â€

He mentioned an R800-billion mega-project that will export 18 billion tonnes of coal from Richards Bay. â€œYou could be taking that money and channelling it into free education. It’s a screaming contradiction about whether you invest in the future of students or whether you put the money into coal that will kill the children.â€

For Bond, these are the kinds of questions Heher ignored. He instead opted to recommend a model based on the United States of Americaâ€™s higher education funding model which has resulted in exorbitant levels of student debt and commodified education. Forbes reported that the average 2016 graduate student in the US has $37 172 (R535 295) in student loan debt. â€œStudent loans have been shown again and again to be a counterproductive way to get society educated,â€ said Bond.

The militarisation of campuses, high police presence, improved security to protect students, and violent crackdowns by the state on protesting students were also not considered by the commission.

The only thing remaining for students to do, according to Bond, is to regroup and win over again the hearts and minds of society, against a government that doesnâ€™t take seriously their needs and demands. â€œThe main thing is whether the students can figure out, especially for coming on campus again next year, more coherent Fees Must Fall demands and unifying them across the country.â€

The Fees Commission Report will not ease #FMF

The Fees Commission report doesnâ€™t provide us, and more importantly students, with any new recommendations for a workable plan for truly fee-free higher education. Simply handing over funding mechanisms to the private sector in the form of a loan only serves to commodify education and further privatise South Africa. This isnâ€™t the end of Fees Must Fall. In fact, the movement will return, empowered by the fact that anyone in the position to create a sustainable fee-free education system doesnâ€™t really want to.