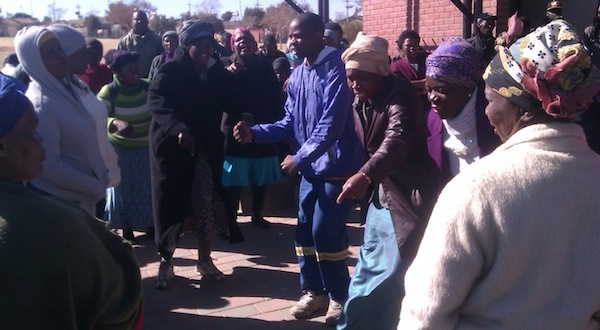 Discontent is brewing in the Ivory Park informal settlement in Thembisaâ€™s ward 78, where residents say theyâ€™re fed up withÂ mismanagement on the part of their counselor, â€˜Big Joeâ€™ Mahlangu. BHEKI SIMELANE listened to their grievances. Johannes Kgatle (38) Ivory Park, research group leader
We established the [research group] because nobody was listening to residentsâ€™ concerns. Our aim is to facilitate communications with the councilor with a view to addressing the problems affecting this community. The councilor has ordered that we be â€œrealignedâ€ but he has not bothered to explain to residents what this â€œrealignmentâ€ is and what it means. We are refusing to be aligned and all we want is to move to houses from here.

The councilor is ever elusive. He cannot be found and he has over seven [cellphone numbers but cannot be found on [any of them]. It has been a challenge even for us as the research group to track him down but we will not give up, if nobody wants to listen to our grievances, we will protest.

Mapula Moeti, 44, Ivory Park, unemployed
The councilor has ordered something called a â€œrealignmentâ€ in the area – a process in which shacks are packed in a particular way. But they have not consulted residents on this realignment. They havenâ€™t even explained to residents what this realignment is. I have been living here since 1991 but I canâ€™t recall a single development initiative by the councilor all this time. During the few encounters weâ€™ve had with him he has not been able to address our problems, claiming lack of knowledge on the particular issue. The government should give us the power to remove councilors because they represent us anyway and any wrong by them is against us. How do we discipline under-performing councilors? Why is it that these guys are answerable to nobody but themselves?â€

Oriah Manabile, 38, Ivory Park, painter
I was told by the councilorâ€™s messengers that I should vacate the stand that my dead uncle left behind and in which I have been living all along. This happened three weeks ago but my issue is now being investigated thanks to the intervention of the areaâ€™s PR councilor. Nomthandazo Kubheka, 30, Ivory Park hawker and Unisa accounting student
The areaâ€™s sectional committee and the Community Policing Forum (CPF) came to my house and demanded that I move my shack within three days but I did not move. Where would I go if I left this area? I have been living here for years but all of a sudden I should move? Move where and why? They said I should move and that I could afford to rent a flat because Iâ€™m working. I did not move, Iâ€™m still here. If they want to implement development programs in the area they should consult with residents first. Elizabeth Mathetsa (71) Ivory Park, daycare centre owner
We all know that our area has problems. I have been running a daycare [centre] since 1992. My kids, who attended the same daycare, have even completed varsity and have their own homes now. My problem is that shacks have been erected in the same yard as my daycare [centre]. If these shacks were to burn like it normally happens with shacks wouldnâ€™t that be dangerous to the children? â€¦ I have requested several times that [the councilor] comes to inspect the situation at the daycare but he has not come.â€