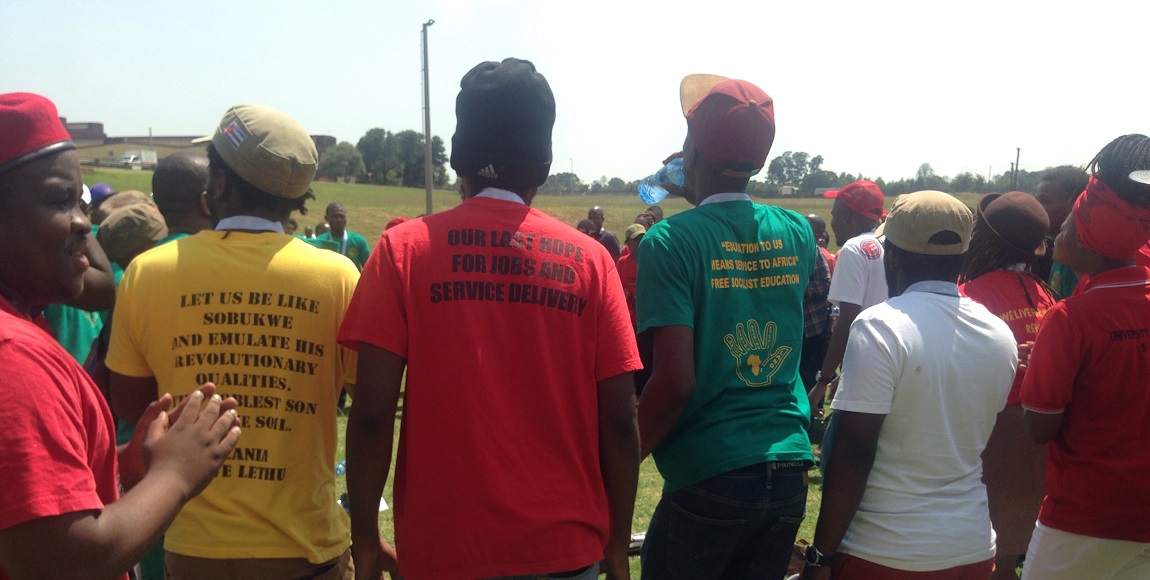 There were scenes of pandemonium at the opening of the Higher Education National Convention that took place in Midrand on Saturday. After a number of delays and disruptions from various student formations, the the convention was postponed until further notice.

The postponement was announced as a result of a brawl that broke out between members of the Progressive Youth Alliance (PYA) and Economic Freedom Fighters Student Command (EFFSC) during the address by Minister of Higher Education and Training, Blade Nzimande. It was announced that the event was being postponed for the safety of the delegates.

The Higher Education Crisis Forum, convened by former Deputy Chief Justice Dikgang Moseneke, along with nine other co-convenors from South African civil society, was put together with the intention of discussing and taking forward resolutions to address the current crisis in higher education. The conference was attended by government officials, student representatives from across the country, educationists, social activists, representatives from business and the media.

Students said from the beginning they were not interested in having a conversation with stakeholders and instead as an EFFSC member told The Daily Vox, they came to get answers from the minister regarding the fight for free quality education.

However, the issue of who has the right to speak, and not higher education, was the cause of most contention at the conference. It was the reason behind every disruption that took place.

The first disruption happened because students took issue with white people being given a platform at a gathering to do with black liberation and decolonisation.

During the early part of the programme, students contested the fact that AfriForum was given a space to engage at the conference. Students rejected the idea that an organisation such Afriforum, associated with Afrikaaner nationalism and anti-blackness, should have any say in the call for free decolonised education.

Unbelievable! The same afriforum who came with stormfront to go war with #FeesMustFall activists & hunted blk students at #UFS like animals? https://t.co/F2W6CGJxrJ

â€œ… We want to talk about how to bring liberation, but we want to do it as Black people, not allowing white people present to pronounce on our oppression and speak with a sense of freedom and humanity while we remain unhuman in this world,â€ said Lindsay Maasdorp, a member of Black First Land First Student Command.

Afriforum eventually left the conference after an external discussion with the programme director Irvin Phenyane.

The second disruption occurred when the representative of #FeesMustFall, Busisiwe Catherine Seabe, began her address and a representative of the University of Witwatersrand SRC, and member of SASCO, announced that they did not recognise the Fees Must Fall movement as a legitimate body and thus Seabe should not be given a platform. Both EFFSC and PYA members who were gathered at the back of the tent took offence to Seabe, a fallist addressing the crowd.

Wits SRC member Kaamil Alli says they do not recognise FMF members’ address because they are not a recognised organization. #EduCrisisForum

Seabe continued her address even as members of the PYA continued to sing while she spoke.

Wits Vice Chancellor Adam Habib was then disrupted by the EFFSC during his address. He eventually attempted to try and shout over the students and stated that part of the crisis was because students had become intolerant to contesting ideas and being exposed to opinions that differed to their own.

After again consulting student leaders, the conference officials announced that the reason for the disruption was because it had been agreed upon that vice chancellors would not be allowed to speak, and thus Habibâ€™s address broke the agreement Moseneke and the other officials had made with students earlier.

Many vice chancellors who were present, including Habib, then left the space after students made calls saying â€œHabib must goâ€.

The final disruption that took place was along partisan lines – the eventual reason for the conference ending.

When Nzimande began his address, the EFFSC approached the stage attempting to stop him speaking. They were met with security but also by members of the PYA who wanted the minister Nzimande to be allowed the platform. The situation eventually turned violent and a fight broke out in front of the minister. The fighting continued on outside between the PYA and EFFSC members and soon after the conference conveners announced that the convention had been postponed and that they would meet to decide the way forward.

Party politics have historically plagued the movement but the disunity was of particularly visible at the conference.

Palesa Mcopheia, EFFSC member told The Daily Vox: â€œWe noted that Sasco came here with a very bad agenda to actually kill and harm for Blade. Theyâ€™re actually protecting the state and not protecting the students of South Africa.â€

While Tembani Makata, Sasco Secretary General said it was sad the convention was postponed because the different parties could not even discuss what they agree and disagree on.

Following the announcement, Justice Moseneke addressed the remaining delegates, saying that they convened the conference to listen to a festival of ideas surrounding the current struggle for education, but that was not possible given the present situation.

â€œWe have a long difficult struggle ahead of us. It is not yet uhuru, and we cannot do it in a disorganised fashion. It must be within the parameters of discipline, of vision, and of a desire to change without shutting down,â€ he said.