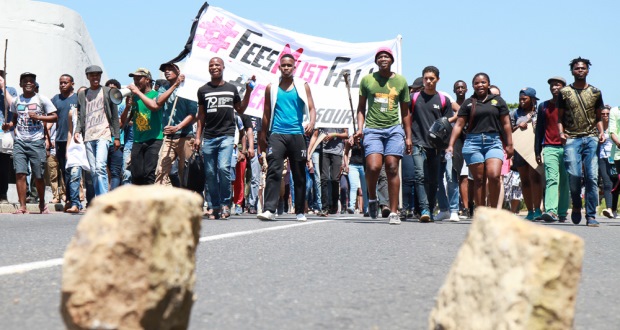 Student protests across campuses nationwide signal that theÂ trust between students and management/staff is fractured. This mistrust arguably goes beyond single issues such as fees or sexual violence. Rhodes University student, SAM VAN HEERDENÂ examines the fracture of this trust and the possible causes of injury.

Trust is a funny thing. It is vague, but necessary. It is hard to define, yet it is a fundamental human need. And you only really notice it when it is no longer there. You put your foot forward, only to falter in the open space of have-beens, could-have-beens, and no-longer. Where do we step next?

Student protests across campuses nationwide signal that trust between students and management/staff is fractured. This distrust arguably goes beyond single issues such as fees or sexual violence. If students trusted management or the staff or government to hear them â€” to take them seriously â€” there would be no need to pick up placards and take to the streets. Martin Luther King reminds us: â€œA riot is the language of the unheardâ€.

What we do to fix the trust and what this entails will no doubt be contentious, but that is not what I explore here. I have tried to examine the fracture of trust and the possible causes of injury, even at the risk of reductionism.

The changing model of higher education globally
When the student population in universities were smaller, the students and management generally had shared interestsÂ â€” that of education. According to Erving Goffmanâ€™s theory of the “total institution“, students shared the views of the staff, and the view of the institution was that of the staff.

But in the late 20th century, universities became less elite, and there were more students attending universities than ever before. Students started to form their own interests, and the university had to juggle these different interests – often unsuccessfully. Amongst other factors, this contributed to the rise of student counterculture movements in the 1960s and 1970s. Students grew disillusioned and distrustful of their leaders. It even led to the rise of trade unions historically.

The corporatisation of the university
According to Chrissie Boughey, previous head of the Centre for Higher Education Research and Training (CHERTL), there has generally been decreased state funding in universities, so about 29%Â of university funding comes from private donors.

The disparity in funding between “marketable” degrees such as commerce or science degrees compared to most humanities degrees shows that this private funding influences the universityâ€™s educational imperative. In a university in the global economy, not all knowledge is equal.

Similarly, calls from students to remove colonial monuments were often criticised on the basis that funding is tied, not to education in itself, but to a brand.It could be hard to trust a management that is at the whim of so many third party interests.

Unresolved matters of decolonisation
Since the beginning of 2015, there has been a call by students across South Africa for greater transformation and “decolonisation” in historically white universities. Perhaps students are mistrustful because they do not feel represented by what they would call an untransformed management.

â€œThe fact that university management and academics are disproportionately white, as well as being older and generally wealthier than students, does open up a gulf which I think makes it harder for students to trust or understand those in authority, and vice versa,â€ said Sally Matthews, a lecturer in the Politics Department.

Matthews explained that the anger of many students and the levels of distrust might also have to do with many students feeling alienated and marginalised in both university spaces, as well as in broader society.

Failures of student leadership
Although most universities have student representative councils, recent student protests have generally rejected these councils. Some have criticised them for being unrepresentative, and for amounting to nothing but popularity contests.

Sandiso Bazana, an organisational psychology lecturer at Rhodes University, says that the distrust towards the SRC could stemÂ from students seeing the SRC as being in cahoots with the management, instead of representing the student body. People feel like they cannot trust SRCs to represent them fairly or seriously.

Why it matters: the value of trust
We need trust â€” as Bazana says, it is fundamental to any relationship. More than that, it improves performance and productivity. Whilst there must always be room for difference of opinion, there needs to a space where these differences can be reflected upon openly and transparently. If there is going to be any significant transformation in centres of higher education, it is going to require some sort of healing between staff and students. Iâ€™m unsure as to what form this will take, but looking at how the trust fractured in the first place may be a start.

Sam van Heerden is a Rhodes University student currently majoring in Politics, Philosophy, and Journalism. Her other interests include photography, analysis and thinking big thoughts. She also spends an undue amount of time voicing her opinion on social media.