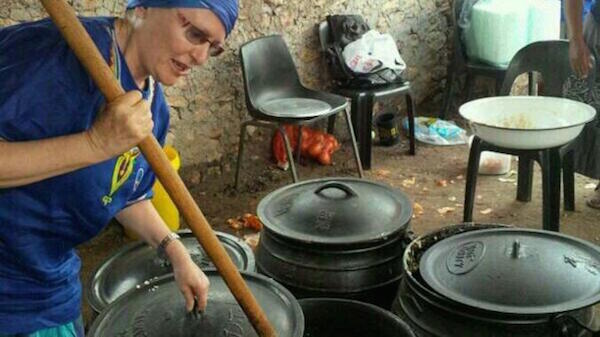 As always in matters of the powerful versus the downtrodden, the conversation must revolve around white people, even when black people are the victims who face the brunt of SAâ€™s social ills, writes RA’EESA PATHER.

You would think that with #BlackLivesMatter plastered across every social media platform on the internet Helen Zille might take the hint and start talking seriously about black lives.

Somehow in her weekly newsletter, SA Today, the leader of the Democratic Alliance managed to write 1,765 words on racism without focusing on black people. A recent spate of public racist assaults in South Africa motivated Zille to pen her piece, but although she mentions these attacks, she does not condemn them. Instead, all she can write is that they are â€œdeeply disturbingâ€ and she â€œcannot ignoreâ€ them.

But ignore them she does.

After writing about a white student peeing on a black man, a white man choking a homeless black man in the name of â€œwhite powerâ€, a domestic worker being beaten by a white man because she was walking down the street and therefore must have been a prostitute (racist logic, folks), and a gardener sjambokked by a passing driver who thought he might be a thief, Helen Zille chooses to sweep black people to the side to focus on white people. As always in matters of the powerful versus the downtrodden, the conversation must revolve around white people, even when black people are the victims who face the brunt of the countryâ€™s social ills.

â€œToday I am focusing only on white racists because they are all too often associated with the DA,â€ Zille writes.

Ironically, even though she is trying to denounce racism, the DA leader canâ€™t bring herself to talk about the experiences of black people and the racism they endure. â€œAt this point people will point out that white people are the victims of assault too. That black people can also cross the race line. That racism is not the sole domain of one group of people. And that far more black people are killed and assaulted by other black people than by whites. They would be right. I have also made these points before. And I will always say: We must, and we do â€“ condemn all crimes and violence,â€ she writes.

It is only at this point, after excusing the racism against black people because white people are victims too, that Helen Zille can directly condemn â€œallâ€ racial violence in the country.

Now weâ€™re not talking about racial violence but about all crimes and all violence.

Before we know it racists like Dan Roodt and Steve Hofmeyr have become victims.

â€œI often wonder what happened in Steve Hofmeyrâ€™s life to turn him into the man he has become. It was not always so,â€ Zille writes.

I kid you not.

She adds that poor Roodt ran away from South Africa to avoid serving in the SA Defence Force during apartheid.

She doesnâ€™t mention that Hofmeyr and Roodt have separatist leanings.

As the leader of the country’s official opposition, Helen Zille must play her part in condemning racism. There is no question about that. ButÂ rather than a strongÂ condemnation of the persistence of this racism, which has a very clear history, the DA leader blusters away.

SheÂ concludesÂ her newsletter by apparently defending Hofmeyr against the cruelty of Chester Missing, the well knownÂ puppet of political comedian Conrad Koch.Â The inclusion of Missing in the newsletter is rather bizzare and it suggests that Zille couldn’t resist suggesting that the puppet’sÂ court dates with Hofmeyer were all a publicity stunt.

For Zille, however, Steve HofmeyerÂ was the victim of a puppet seeking national fame.

While Zille says there is no place in the DA for racists, the fact thatÂ she feels the need to defend white people when she speaks of racist attacks against black people is a clear indication that she is afraid to offend members of her constituency who are racist or even those who prefer to ignore the countryâ€™s obvious race problems. She alsoÂ wonâ€™t challenge them, because without them her party is far less popular.Â So she plays it safe, talking about â€œallâ€ crime, while displaying her own racial ignorance.

South Africa has a racism problem, and itâ€™s becoming increasingly clear with each horrific racist assault.

Zille appears to blame the proliferation in public racial assaults on the increase of high profile racists like Roodt and Hofmeyr, but race and racism were constructed centuries ago, and with or without Hofmeyr and Roodt, it would still exist.

That these incidents have been given publicity says nothing of Roodt and Hofmeyr, but speaks volumes on the silence of South Africans who have either witnessed or experienced racism. Itâ€™s about time we spoke up.

I wonder if Helen was wearing her doek when she wrote her latest newsletter. The hypocrisy of it is the story of a white woman who tries to reach new constituencies by attempting to address issues she thinks affect them. But she canâ€™t truly address these issues because she is part of the problem.

Hofmeyer, Roodt, Chester Missing. They are all just distractions from the real issue – racism in South Africa today.

And what’s clear is that Helen Zille can’t talk about black lives – she can barely bring herself to say they matter.