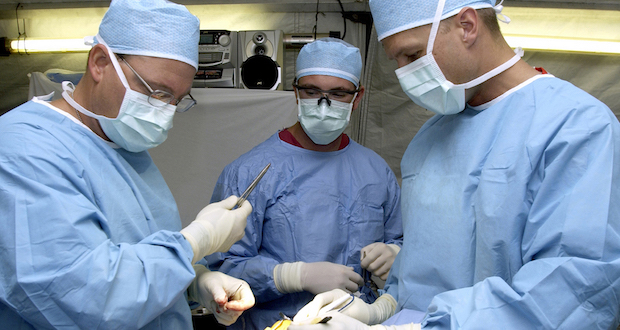 Health Minister Aaron Motsoaledi last week suspended two doctors who performed aÂ caesarian in a maternity ward, and subsequently lost both the mother and baby. But DR THOMAS GRAY says the doctors did the right thing, and that the health ministerÂ got it wrong. He explains why.

Doctors seem to be dominating the media recently, but for all the wrong reasons. Negligence, incompetence and refusal to treat dying patients are but some of the allegations levelled against doctors working at various public hospitals around the country.

Other than the undue sensationalism and hype these accusations seem to usher in, what amuses me is the tendency for people both inside and outside the medical profession to express their â€œexpertâ€ opinions on the matter.

Let’s just say commentary from the gallery is as useful as my insight on say, an engineering fault at Moses Mabhida stadium.

Another aspect, and though less amusing, is the indiscriminate suspension of doctors without due processÂ and their demonisation in the media prior to any formal investigations or their findings.

A case in point is the recent suspension of two doctorsÂ at Evander Hospital in Mpumalanga following the death of a 19-year-old girl in labour and the death of her newborn baby. The department of health accused the doctors of â€œmisconductâ€ and â€œfailing to adhere to prescribed medical guidelinesâ€.

Again much has been said about the case, mostly by underachieving libtards. But never mind them, letâ€™s try to understand what happened.

The case
The patient in question was suffering from a severe form of hypertension (high blood pressure) in her pregnancy know as eclampsia. This causes the patient to have severe seizures, as in anÂ epileptic patient, which sometimes â€“ but not always â€“ responds to treatment.

In this case, the condition was so severe that the patient went into cardiac arrest â€“ basically her heart stopped beating. In a desperate attempt to save the life of the baby and the mother the doctors performed a perimortem caesarean section, that is, they performed the caesarean section immediately after the death of the mother.

This act, brutal as it may sound provides the only chance of saving the baby and the mother.

It saves the mother by removing the source of the seizures and subsequent cardiac arrest, that being the pregnancy. For the baby, it would restore oxygen to the brain and vital organsÂ post delivery and, if done in time, one can then attempt to kick-start the motherâ€™s heart again.

It is a difficult and tricky procedure. Itâ€™s a last gasp-effort in a desperate situation. It has a low success rate. In a situation as dire as this, however, there really are no other alternatives. But, do note, the doctors involved were senior clinicians, with more than adequate qualifications to tackle it.

To no avail, the baby didnâ€™t survive and the mother died after 10 days.

After the expected media tirade over the incident, our honourable Minister of Health, Dr Aaron Motsoaledi, paid a visit to the hospital where he immediately suspended the two doctors involved. Indefinitely.

He was reportedÂ as saying: â€œThe manner in which the operation was done on this young girl outside theatre was never done before. I have never seen that in my experience of 32 years in the profession.â€

But that is an odd thing to say. Was the minister saying the doctors didnâ€™t know what they were doing when they tried to save the mother and baby? What hasnâ€™t been done before?

In the world of medicine and science, there are strict rules and regulations. Usually, clinical practice is standardised, and backed by evidence in the guiding literature and research.

In short, yes, doctors can make mistakes. They â€“ we â€“ are only human.

But did the ministerÂ know what he was talking about?

The research
I decided to check up about perimortem caesarean section. I wanted to make sure I understand the risks, the variables and most importantly, the clinical practice â€“ how itâ€™s done.

The first article I find, in Journal: Obstetrics and Gynaecology, which is described as a â€œcore clinical journalâ€, is from 1986, in which practice is described to have gone on since â€œantiquityâ€. The article then reviews known cases from the previous 100 years. They further suggest that the optimal time frame for the special procedure that the doctors at Edenvale conducted is to be done in four minutes.

In the British Journal of Obstetrics and Gynaecology (BJOG), another well-respectedÂ clinical journal, I found a number of studies between 2010 and 2011 on the topic. Another reference alluded to a speedy procedure: â€œAn important factor to improve outcome is more timely application of this potentially life-saving procedure.â€

The most recent study on the subject, appeared in the Journal: Obstetrics and Gynaecology, and involved simulated patients of manikins (models of the human body) to determine the time taken to undertake a perimortem Caesarean section. It made the following conclusion: â€œPerimortem cesarean delivery during actual arrest would require more than five minutes and should be performed in the labour room rather than relocating to the operating room.â€

Now, given the information we currently have on the incident that took place, and given the stated literature on the topic, how should we understand the actions of the doctors and the response of our dear minister.

Letâ€™s not forget that a young woman and her child died tragically. Understandably, to the naked, untrained eye the rushed and bloody operation appeared bizarre.

But according to what we know, and based on her medical condition, the young pregnant woman fell into cardiac arrest. As a result, the doctors decided to act immediately, choosing to perform a â€œperimortem cesarean deliveryâ€. The procedure, by its nature, needs to be done rapidly, within five minutes or so, and there is no time to enter an operating theatre. This is the recommended procedure.

All of which makes our ministerâ€™s actions and words seem misguided and wrong.

The verdict
If anything, we ought to be praising the doctors for their commitment to trying to saving the lives of the mother baby. More so, we should acknowledge their adherence to already established, internationally recognised clinical guidelines, especially given their location on the periphery of the major academic hospitals.

If there is doubt or concern, the onus is on the Health Professions Council of South Africa (HPCSA) to investigate the matter on a scientific level based on the most current evidence in the literature.

When we allow politicians to pass judgment arbitrarily, we throw mud in the face of centuries of medical science.

Furthermore, the absence from work of our colleagues through these suspensions further jeopardises the only overly burdened, understaffed and under-resourced health service. Ironically the main people affected by such actions are none other than the ones the politicians claim to be protecting: you, the South African people.

Dr Thomas Gray (*not his real name) is a doctor living (and slowly dying) inside a public hospital. Heâ€™s here to tell us whatâ€™s happening inside our hospitals. He would share his name with you, but then heâ€™d have to kill you, and that would be unethical. If you have information to share, about this story, or any other aspect of our public healthcare system, do get in touch.

The cited works if you want to do more of your own research on the topic.

Dijkman, A., et al. â€œCardiac arrest in pregnancy: increasing use of perimortem caesarean section due to emergency skills training?.â€ BJOG: An International Journal of Obstetrics & Gynaecology 117.3 (2010): 282-287.

Warraich, Q., and U. Esen. â€œFor perimortem caesarean section, the surgical knife is the most important instrument.â€ BJOG: An International Journal of Obstetrics & Gynaecology 117.6 (2010):Â 768-768.