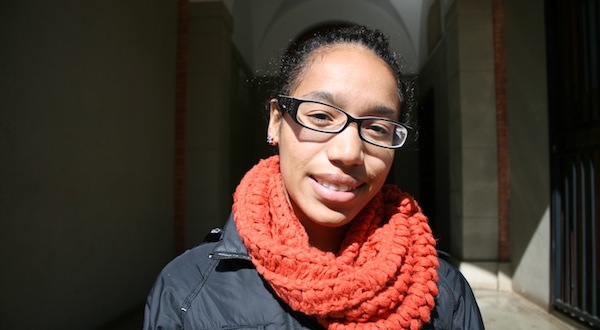 According to a recentÂ City PressÂ report,Â less than one in every ten university professors in South African universities is black. These low numbers have been attributed to socioeconomic issues such as the low incentive for black graduates to pursue an academic career that pays significantly less that a job in the field in which they’veÂ studied, as well as institutional challenges which make it harder for black students to pursue a career in academia. Kira Genende, 20, Glenhave
I donâ€™t think the race of lecturers makes any difference. What matters is the quality of their teaching. However, I do feel that with lecturers of a different race there is a language barrier that students may encounter. It important for our country that there is diversity in universitiesâ€™ academic staff but more important is [that] all lecturers [are] of quality. It should not be just about race, but we should also consider merit. Mcebo Dlamini, 28, Soweto
This issue of the lack of black professors is an issue that is close to my heart. Institutions such as Wits University should be ashamed of these statistics. In order for black academics to qualify, Wits must provide the financial means and the opportunity. There are lecturers that left Wits for other universities then later on got their PhDs there. What does that say about Wits? The race of my lecturer matters and, more than race, the nationality matters. Let us look at this issue beyond race; the black professors in our universities are not South African. It is hard to [understand] them because of their accents. When will we produce South African professors? That is a fundamental problem.

Racism is still entrenched in this institution.Â  When a black lecturer was accused of sexual harassment, his picture was all over. However, when a white lecturer was also accused of sexual harassment, his face was hidden and his name was protected. For me, universities have to answer to South Africans as to why there is such a low rate of black South African professors. People have to leave South Africa to obtain their doctorates. Delicia Arjuna, 21, Linmeyer
The race of my lecturer does not matter as long as they are knowledgeable [about] their work. I am really more concerned about what they are teaching me and how much I learn from them. But when you look at black foreign lecturers, students seem to be more critical of them. People are not always [accepting of] diversity, but it fascinates me that when it is a French accent or any European accent it seems to be accepted by students. I donâ€™t like that mentality â€¦ because a European accent can be just as difficult to understand as an African accent. The statistics are shocking but it is something I am used to. In my high school most of the teachers were white and the few that were black were not South African. I think that a lot of South Africans donâ€™t want to teach but also, nobody has faith in South Africans to teach. Bhekithemba Mbatha, 21, Soweto
The matter of not having enough black professors can become problematic because for me coming to university was a culture shock. I am from a township school and I was used to just seeing black teachers, I struggled to adjust and I felt inferior to them. Also, having European foreign lecturers is challenging because I cannot [understand] their accents. I think programmes must be put in place by the government and universities to encourage black academics at honours and masters level to pursue their PhDs. I think money and funding are the biggest barriers for black people to pursue academic careers, so there must be monetary rewards. This is crisis, especially when you realise that most of the students at Wits are black. Pearl Pillay, 22, Johannesburg
I would rather be lectured by a black lecturer particularly because I am in the politics department. I would rather learn about the political world and political theory for someone who will probably see politics in similar ways to me and can relate better to other students. I saw those statistics in theÂ City PressÂ and I was not shocked, because even Wits is still very white… At postgraduate level, there are black students who can easily enter the academy but they cannot and I do not think it is because of lack of trying. I cannot speak for other universities, but I donâ€™t think Wits is very accepting of black academics. Black academics are held to greater scrutiny than their white counterparts. Case in point is how the university dealt with the sexual harassment cases; Rupert Taylorâ€™s identity was initially protected but Last Moyo and Tshepo Wa Mamatu were revealed immediately. The integrity of black academics is not as protected [as] white academics’… I can understand why black academics are not interested in enrolling for PhDs in a university such as Wits and others in South Africa like the University of Pretoria that are still very racist. Tebogo Ntsibande, 21, Soweto
The race of my lecturer does not matter until I cannot [understand] them because of a thick accent, regardless of race. It is so sad that black South Africans do not value education enough to take it a step further and pursue postgraduate studies. But we must also consider the mere fact that not enough black people get into universities. How then can we progress to PhD level? I want to see more black professors. It is problematic [for] me that I was taught African history by an Italian in a South African university. I also think these institutions are not friendly towards black academics. I think our education system has not evolved enough; the world of academia has been the same since imperialism, colonialism and since apartheid. It is difficult for black academics to entrench themselves in a system that was inherently against them. How then do they excel?