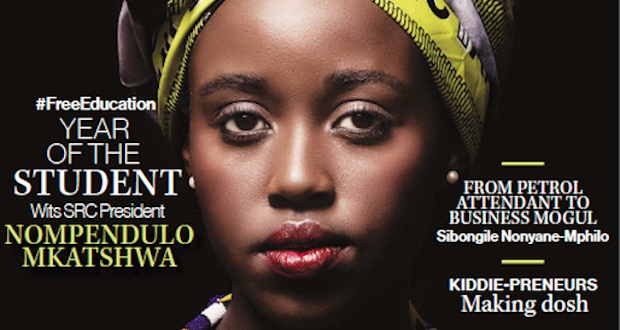 After several tweets hinting at who the cover star may be, Destiny tweeted a shot of the cover early on Sunday evening. Their choice was not particularly surprising – Mkatshwa, together with other Wits student leaders, has been featured heavily in media coverage of the FeesMustFall protests in recent weeks.

#DecemberCoverReveal Wits #FeesMustFall Mbokodo Nompendulo Mkatshwa is on the cover of DESTINY – on sale Monday! pic.twitter.com/TT6aAwAbfY

But it wasnâ€™t all smooth sailing for Destiny â€“ as soon as the picture started circulating, Twitter was set aflame with people debating its choice of cover girl.

@thedailyvox @Ulo_Mkat as much as i am happy for Ulo, being the face of the movement is by all wrong and misdirects the revolution â€” Solani Sibanda (@Solaneh) November 15, 2015

Part of the problem was the fact that #FeesMustFall has always aimed to present itself as a broad-based, non-political student movement, in which everyone’s voice has equal weight. To put a single student on the cover, many argued, ignored the contributions made by everyone else.

17. For @DestinyConnect to highlight ULO is failing to see that different leaders emerged within this movement.

Her ANC affiliation was scrutinised by some, particularly asÂ she was wearing ANC colours on the cover. But others pointed out that she’d never hidden her affiliation during the protests.

The head gear she always wore in all protests is now a problem. HandsOff @Ulo_Mkat pic.twitter.com/TtbW6QWJkg â€” esethu (@EsethuHasane) November 15, 2015

Some commenters argued thatÂ DestinyÂ had madeÂ it appear as though #FeesMustFall had been led by only one person. OthersÂ argued that although Mkatshwa had been put on the cover of the magazine, no one was actually calling her the face of the movement.

My view point is one. Let us not victimize Ulo. I am under the view,however that our revolution need not a face.

Radio host Redi Tlhabi pointed out that Mkatshwa’s contribution did not negate that of others.

That Nompendulo was part of collective should not negate the sheer force of her identity& individuality.Great cover http://t.co/B12V7HUiVx â€” Redi Tlhabi (@RediTlhabi) November 15, 2015

And others pointed out the hypocrisy of armchair activists who now chose to criticise her for being in the spotlight.

Some yall were protesting while sitting in front of ur big screens watching Ulo match in the Sun, now you crying coz she’s on #Destiny ekse

Meanwhile, former SRC president Shaeera Kalla, another prominent student leader involved in the #FeesMustFall protests, failed to see what all the fuss was about.

It’s deeply saddening how ppl will now fight about recognition, who was there through it all & who wasn’t. Who cares?The struggle continues! â€” Shaeera Kalla #Oct14 (@shaeera_k) November 15, 2015

Is Ulo appearing on the cover of Destiny magazine on her own really that big a deal? As the SRC president, does she have the legitimacy to do so? Or is it a selfish move? Comment below, or tweet us your thoughts @thedailyvox!