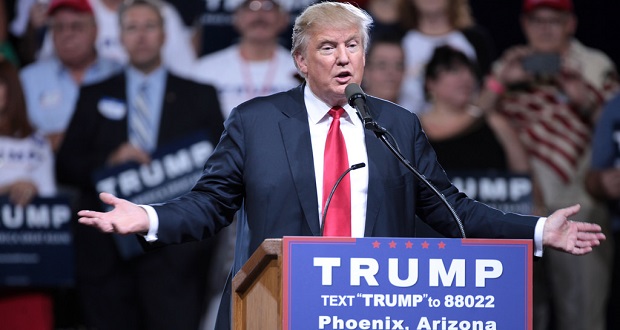 On Wednesday morning, while South Africans were still rubbing sleep out of their eyes, Donald Trump was named president-elect of the United States. The world reacted with surprise, but is it all bad news? The Daily Vox asked some Joburgers how they feel about the incoming American president and whether he has anything in common with ourÂ own President Zuma. Luyanda Dingalibala, 30, student, Melville
[dropcap]”[/dropcap]I think that it is a bad thing, bearing in mind the type of person he is. He is an anti-Semite, against minorities and he is basically insensitive to a lot of things. Take the comments he made about grabbing women in theâ€¦ thing, I think heâ€™s basically an unprincipled man.

If Trump is president I think we would actually have bad trade relationships, because number one, first thing he said if he would ever step into power it would be that he would remove minorities in the US – Hispanics, blacks, Muslims. Now South Africa is a diverse nation, so if he is against those minorities in his country, do you think he would support them here? No.

I think he is a good man, but to actually put him in that type of power, he would abuse it every step of the way. His qualities as a business person, they are up to point, but in terms of his unique leadership style he wonâ€™t do much for the country, in fact he will tarnish the whole image of the USA.

Basically I was the originator of the phrase that they are two cheeks of the same butt. Number one, they [Zuma and Trump] are misogynists, number two, they are power hungry. These two men are so alike in the sense that basically all they think about is, â€œhow much can I squeeze in for myself?â€.“ Jacqueline Monyemangene, 20, student, Randburg
[dropcap]”[/dropcap]Itâ€™s a good thing for America. Once you give someone a chance to rule there can be a fairness. I think maybe it will mean our president Jacob Zuma will change his mind and give other people a chance to rule the country. I think maybe they should just give him a chance. Letâ€™s see how he takes things.“ Junaid Leroux, 26, consultant, Eldorado Park
[dropcap]”[/dropcap]I saw that Trump won the elections. I actually think itâ€™s a good and bad thing for America. Weâ€™ll see what he can do, but for now Iâ€™m still going with the bad thing for America, because heâ€™s racist and has too much power. Our country is definitely going to worsen, because at the rate weâ€™re going and now, with America and the exchange rate, itâ€™s not going to do any good for us. Deveauneyn Cotty, 24, lab assistant, Westbury
[dropcap]”[/dropcap]Iâ€™m not into elections but I do think if Donald Trump is president, perhaps thereâ€™ll be some change in America. Maybe financially, seeing that he does have lots of money. Also thereâ€™s a lot of poverty happening that side, maybe he would be able to change that situation. Maybe he can help us, because our country is in a bad state, so maybe Donald Trump can bring change to South Africa. I think that people will always criticise you despite your situation or the type of person you are, they donâ€™t personally know you. But they shouldnâ€™t even let it bother you. If Donald Trump is a good person he would have to prove it himself.“ Wade Klein, 27, lifesaver, Eldorado Park
[dropcap]”[/dropcap]For me really, I think he will do a good job in America. He will be an excellent president for the USA. I think he has a lot of experience, basically heâ€™s a good candidate for president. I donâ€™t think it will really mean much for South Africa because it wonâ€™t benefit us. I donâ€™t have any knowledge of what he has done. I donâ€™t judge him for anything he has done. Itâ€™s up to the people to vote. If majority votes for him then itâ€™s fair for him to be president. I think they [Zuma and Trump] are more or less the same type of guys, chasing money.“