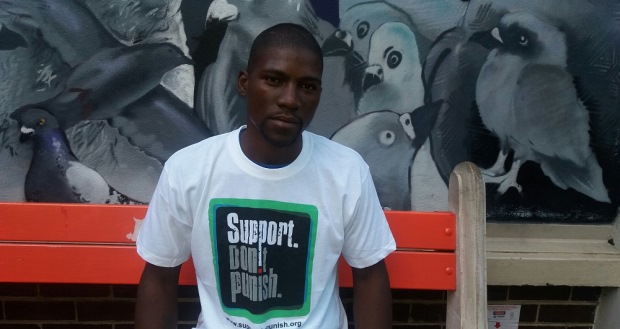 BHEKANI BHENGU, a 31-year-old from Claremont, Durban, was hooked on whoonga for 11 years. He was at the Durban University of Technology’s “Support, don’t punish” campaign event advocating for better drug policies based on health and human rights. He told The Daily Vox about his journey of drug addiction and trying to break the habit.

Smoking whoonga did not only rob me of my future but my family as well. I started using whoonga in 2005. It was still unpopular at that time and could only be found in a few townships. It all started off as an experiment where I found a group of my friends smoking and decided to try it. After trying that one fix I could have decided not to try it again, but instead, I made a wrong choice and continued smoking anyway, not realising that I am throwing myself under the bus.

I was doing grade 10 at that time; I started having cravings now and then and needed to feed my habit more often. I dropped out of school and started doing odd jobs. I started off by pushing trolleys for customers at the retail stores but I didn’t make enough money; that’s when I started doing all the wrong things as a quick way of making money. I was now stealing and robbing people of their cellphones and money until I became a bad boy in my community.

There is nothing people around me didn’t do to try and help me. My mother is a bishop at a church and seeing people talking behind her back about how she goes around preaching to people but fails to control her own household started getting to me. She would pray for me all the time and tried to find help for me but I would only stop for a while and then go back to my old ways.

I later decided to leave home and the neighbourhood with the hope to change my life but when I got to my new place, I joined the wrong crew again. The tricky part is that when you start using, quitting often becomes a challenge because you miss that feeling of being out of this world. Even when I tried quitting, I couldn’t stand the drug withdrawal pain.

Following my loved ones countless efforts to help me quit the drug, I believe that it all starts with oneself. It is within the user’s choice to decide to quit smoking, and then people can try and intervene from there. My girlfriend has been very patient with assisting me to finally quit. She has bought me different medication to ease the pain and the cravings, but soon after she is certain that I am done I go back to it again.

People would look at drug users and assume that they are enjoying it, but the truth is that we all have different stories to tell. We all do need help but we are not ready to convince ourselves that we need help. I don’t like smoking whoonga anymore but being unemployed isn’t helping either. If I were to get a job, I would quit even today because it’s all in my mind.

The only thing that pushes people back to drugs is the stigma. The victimisation from our communities is not helping; we often feel isolated and need a sense of belonging and we find that in each other. Drug users often run away from home and go to the urban spaces where they often become family. Similar to most cities, drug users within Durban have found and occupied a space under the bridge.

I also wish to be reunited with the society and be whole again, I would love to find a job to provide for my children and be a good father to them.