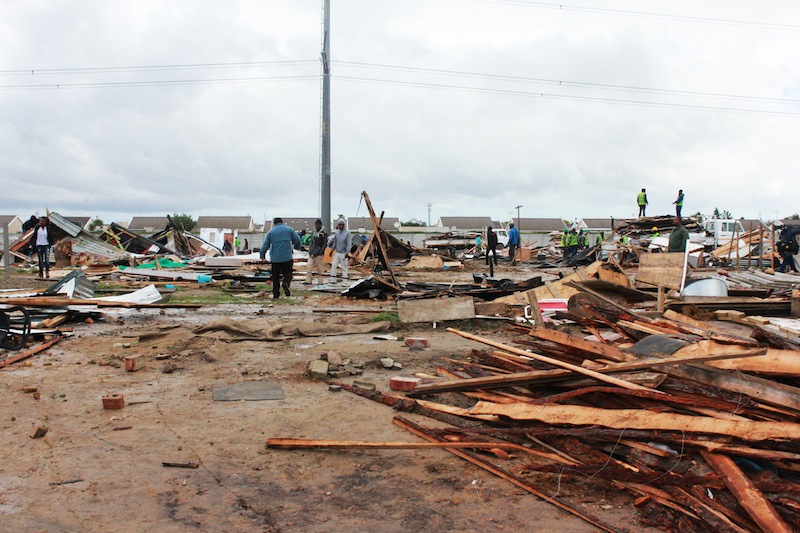 RA’EESA PATHERÂ reflects on her time reporting from the Nomzamo informal settlement near Lwandle in Strand, where hundreds of people have been displaced following a court ordered eviction from private land earmarked for the development of the N2.

Lwandle has become a site of disgust, a violent indignity wrought upon a weakened people. I am sick of it. The people of Lwandle voted for the arms of our nation to stretch out and uphold democracy. Instead, its people have been punched with the gut-wrenching blow of homelessness. Now, they lie in the street, beaten and shivering, while agents of the law sneer on.

As I walked through Lwandle on Tuesday, mottled couches and broken furniture traced the destruction of this week. On the pavements, men hammered at corrugated iron sheets, rummaging for materials for a new home, while children tip-toed through the debris, oblivious to the devastation that surrounded them. Their parents are in limbo, lost and overwhelmed, staring into the nothingness of a muddied piece of land they once called home.

â€œThe thing that happened here yesterday, I will not forget it in my life,â€ Themba Janda, one of Lwandleâ€™s lost residents, told me.Â Even as an onlooker, I share his sentiment â€“ the ruins of Lwandle are not easily forgotten.

Itâ€™s day two of the evictions but somehow there is still much to destroy. The remaining wooden structures have been slashed to the ground, while police stand tall, guarding contractors hired to wield destruction.

Like the walls of their shacks, people have been torn apart and left in the soil as abandoned waste. They have been treated like dirt, thrown out of their homes, and into a life of vagrancy. Law enforcement watches them with a beady eye as though these lost citizens are the grime beneath their shoe.

Deeper into the shack-less site, people crowded around the police barricade that separates them from the land they once inhabited. A few women began singing and chanting, and the rhythm of protest simmers through the crowd. Minutes later, shots broke out.

While the teargas burned into my eyes, and my pulse thundered with adrenalin, I felt fragments of Lwandleâ€™s rage coil around my chest and tighten it in a suffocating clench.

What people need to understand is that Lwandle is not an organised protest. The people involved are not just adults shouting out slogans at government. Just minutes ago, children were darting around the legs of policemen, brushing against their shins. But shots were fired.

I saw mothers running with babies tied to their back, I saw men flee, ducking behind whatever structure they could find, to escape further injury to their already powerless state.

This is what I took away from Lwandle and the evictions that happened: it is about the cold power of big wigs who can kick penniless people into a nightmare of insecurity and vulnerability. I donâ€™t say that because Lwandleâ€™s people were forcibly removed, I say that because of the aggression and violence they have had to endure while being trampled upon by those meant to protect them. Lwandle is not just another story to file under police brutality. It is the reality of human injustice.

This is not just about Sanral, the ANC, the DA, or any other organisation. Itâ€™s about the way in which Lwandleâ€™s people have been tossed into the winter rains, with no compassion and no dignity. The people of Lwandle must be given homes, and until we recognise the grotesque mentality that powers inequality, human indignity and disregard for the rights of the powerless, Lwandle will just be a blip in the on-going narrative of displaced people.