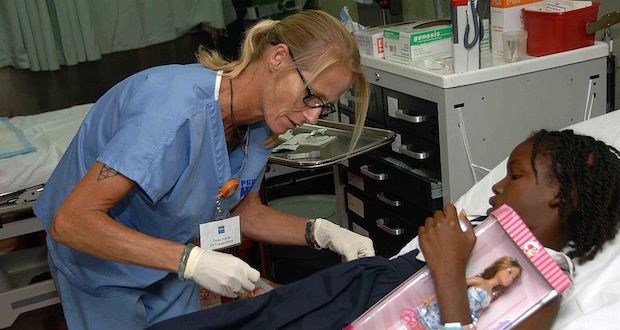 DR THOMAS GRAY concludes his two-part series on rollercoaster that is a night spent treating patients in the trauma unit of a public hospital.

The voice of the paramedic echoes as you stand by the nurses’ station. On the one hand, youâ€™re trying to digest as much information as you can about the situation to help prepare the receiving team. On the other hand youâ€™re relieved that youâ€™ve actually had a chance to sit and breathe, to give your tired feet a break.

There are a few physical challenges working in resusÂ (the resuscitation area). For starters, the area is kept extremely warm to prevent already compromised patients from becoming hypothermic, at the cost of some serious discomfort on the part of the staff. A persistent bead of sweat on your brow becomes a constant annoyance, as you go about trying to do procedures like inserting a breathing tube into a patient’s airway.

Patients arrive on ambulance or helicopter stretchers but I once saw a patient brought in on a wheelbarrow.Â They then need to be transferred to a hospital bed. This is simply enough when you have a full trauma team of at least six people, as well the paramedics. ButÂ on a busy night for both the trauma team and the paramedics, one is bound to develop some lower back strain.

A call comes in from a paramedic en route to the hospital. The conversation ends and the paramedic puts down on his end, but you still find yourself with the phone to your ear treasuring the few moments of rest.

The ambulances arrive with aÂ family from anÂ accident scene. Four occupants: parents and their two children, T-boned by a drunk driver who skipped a red robot. You curse under you breath as the rage builds up inside you. But you need to push those emotions aside and deal with the tragedy at hand.

The father took the most impact from his side – his vital signs are unstable, heâ€™s lost a lot of blood. It seems he has severe pelvic and abdominal injuries. His thigh bone is also broken and has protruded though the skin from the impact. The glass shattered and has caused severe soft tissue injuries to his face and neck. He must have once been a good looking man, tragically his appearance will never be the same. He will always carry these ghastly reminders of that horrific night – if he survives.

The mother is frantic but stable. Weâ€™re unable to assess her injuries as she desperately wants to know the status of her husband and children. We try to reassure her, and tellÂ her thatÂ we will do everything we can to help them all. Then we noticeÂ the unmistakeable bump on her abdomen – sheâ€™s also pregnant, and now sheâ€™s started to bleed. We need to move fast to ensure the wellbeing of both the mother and the baby.

I hear screaming in the trauma unit. Thereâ€™s always noise and screaming. But this screaming is distinctly different. When I hear it, I know it can be only thing. Itâ€™s so vivid, so chilling. A parent’s desperate cry for their child. It’s haunted me for many years. When I had my own children, I realised where it came from.

A little girl has been run over while playing in the street outside her home. Sheâ€™s got bruising on her head, sheâ€™s not breathing very well and is unresponsive. We immediately get to work securing her airway and continuing the rest of the resuscitation. Dad is beside himself. He only took his eyes off her for a minute while he was emptying the groceries from the car. He keeps blaming himself, inconsolable as he stays by her bedside clutching her hand while we wait for her to be taken to a CT scanner for a scan of her brain. Things donâ€™t look good. Her pupils are not responding to light, and despite having had no sedation or pain medication, she hasnâ€™t woken up.

She was due to start school the next week. Out of sheer excitement she had already laid out her newly pressed uniform and shiny shoes for the first day. Her dad had got her a Spiderman bag, as she was a bit of a tomboy. Now she is lying on a hospital bed fighting for her life.

She comes back from the scanner. The result is utter devastation. The bleeding in her brain has caused such severe pressure and damage on the brain to the point where she has now been pronounced brain dead. No sooner have we broken the news to him, than we are obligated to discuss the possibility of organ transplant with him. It seems harsh and inhumane but organ transplant is a race against time.

To our surprise he agrees, after which we contact the transplant team co-ordinator, which sets in motion a complex series of events. Testing the donor’s blood type against patients on the organ donation waiting list, getting them all into surgery in time, getting the right surgeons in place.

The operating theatre staff arrive to fetch her to go to surgery. Itâ€™s a heart-wrenching moment as the father says his final goodbyes. That little body, only a few hours ago full of life and love, innocent to the cruelty and harshness of the world, now empty. As they leave, her little arm slips off the bed, I rush to pick it up and put it back on.

At that moment, etched in my memory, a part of my heart left me to go to heaven with this child. She still had patches of pink nail polish on her nails, remnants of happier times. It was an unusually human moment in an extremely inhumane environment. It was a jolt back to the reality of the tragedy that we face everyday.

The trauma unit is a harsh place. It not only tough mentally and physically, but emotionally too. The above wereÂ just glimpses of my personal encounters in the trauma unit and Iâ€™m sure many others have similar tales to tell.

It pushes one beyond the normal call of duty, to share in the trauma of the patients you treat, to be with them through their most vulnerable moments,Â to comfort and counsel their families.

For a long time I thought that being a doctor had hardened me towards people’s pain, that things didnâ€™t bother me as much emotionally, and that we can only cope with things by not caring.

But I’ve realised over and over again that I was wrong. When I came home and broke down when no one was looking, I was wrong. When I sat through the night with a frightened child when her mother was in surgery even though I wasnâ€™t on call, I was wrong. When the pain of the tragedy I have witnessed over the years still haunts me and reminds me to be a better doctor, I am wrong.

It is those that I salute and dedicate this to.