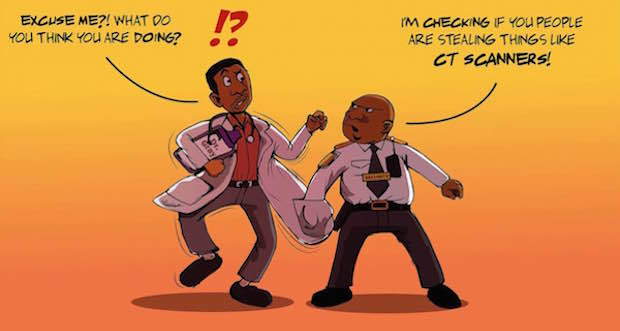 In a new series on The Daily Vox, Dr Thomas Gray*, a doctor inside an unnamed hospital in South Africa, takes us inside the weird and wonderful world of public health. The stereotypes â€“ of morose wards, deadly doctors and needy nurses â€“ are true, he says. Other than that, there is nothing really to panic about.

Pop culture is unsurprisingly littered with touching eulogies about life and death in the public health sector. Valiant tales of legendary medical doctors who go beyond the call of duty actually exist. But there is a dark side to this nobility â€“ if you donâ€™t reflect the same zeal in saving people as a mad-dog doctor, then you are looked upon with contempt. Case in point: hospital security. DR THOMAS GRAY explains.

Talk about dedication. A doctor I know totaled his car on the way to work, smashed his face in the process, but still pitched up to work on time to continue his day with Band-Aids plastered to his nose. Yes, Band-Aids.

His superior grudgingly offered him the day off. Heroically, he refused. Yes, next time you want a doctorsâ€™ note for waking up on the wrong side of the bed, think about my friend who came to work with plasters on his face.

I swear, there are people in this sector who feel they must fulfill a higher purpose (usually involving dry lumps of Pronutro while driving to work at 6am).

It is no wonder then that those who donâ€™t share such zeal â€œto serveâ€ are looked up with disdain. Case in point: hospital security.

Mention these creatures to any doctor and you can expect a barrage of unrefined language.

Letâ€™s briefly explore the roots of such condescension.

Rumour has it that once upon a time a doctor â€“ or at least a person claiming to be one â€“ was caught trying to sneak some liquor onto hospital premises. The matter was referred to management (another group of creatures doctors look upon with much scorn). At the same time, it also came to the attention of management, that some doctors were stealing hospital supplies for their own private practices.

Using their higher intellect and superior reasoning skills, management’s solution was to implement a plan to search the boot of every health professional entering or leaving the hospital premises. (Visitors, oddly were exempt, because what would visitors steal from a hospital, right?)

Some facilities went as far as to require each staffer to get out of the vehicle, and to personally open and close the darned boot each time.

Now, picture the daily chaos and frustration that occurred every morning and afternoon at the hospital entrances once this plan was in place.

For the most part this exercise is purely perfunctory; guards glance at the contents of the boot, issue a thumbs up, and you can be on your way. The rest of the vehicle is left completely untouched and uninspected because, as we know, thieves almost always keep stolen stuff in the boot.

On other occasions, guards open and close the boot while in the middle of a conversation; without even taking a proper look.

I once asked a security guard why they search our car boots. His reply, infuriating â€“ though rather classy I must admit â€“ was: â€To check if you people are stealing things like CT scanners.â€

Let me explain: a CT scanner is used to check for medical ailments by making 3D visuals out of an object. It doesnâ€™t fit in a pocket, let alone a car boot, because it weighs about 2,000kg. A CT scanner in my boot? Obviously, these gents had no idea what they were looking for, and here is the proof:

One fine day, about 20 computers were stolen from one of the clinical departments at a major regional hospital in Gauteng. Retrospective CCTV footage caught the moment the goods were being transported off the premises by a hospital cleaner in the canopy of his Isuzu bakkie. Unfortunately for him, his bakkie broke down at the front gate. Clueless, albeit helpful, security personnel helped jumpstart the vehicle and got the rogue back on his way out of the premises.

At the same time, they sometimes know exactly how to needle us.

A young intern doctor was once stopped at the gates, and after a search, bundled into a security van and taken down to the local police station to be charged for stealing hospital supplies. Her head of department had to be called to bail her out. Her offense? They found a hospital needle in her pocket.